Time has come for a new Doom Desire update.

There's a story a certain old guy may tell you, about cars you left to rust.

Thanatos: The Thanatos Gunship uses same propulsion system as all Essence aircrafts, based on electromagnetic acceleration of charged air and plasma. Its reactor allows the heavy aircraft to stay inair, still leaving enough extra power for its anti-tank laser.
GAIA: Old landship concept revived, it's a mobile fortress that's meant to allow Essence keep secure safespots everywhere they move. Armed with lasers, long range AA missile launchers, and a giant ion accelerator, it has all the firepower needed to move through hostile territories.

Before a war, politicians use propaganda to prime civilian population for their plans, so they get their support. But who needs propaganda, if you can control people's dreams... If your own dreams fight against you, and make you more susceptible for hostile influence, how can you fight?

Lastly, in April, Essence scientists came to a very important, yet very horryfing question: how do you defeat time traveling, hyperdimensional aliens with guns and bullets anyway? The answer is... you don't.
So they decided to get some help, and summon Ancient Eldritch Abominations to fight the aliens for us!
Ia! Ia! Cthulhu Fthagn! Ph'nglui mglw'nfah Cthulhu R'lyeh wgah'nagl fhtagn!

Hmm... seems they summoned the wrong one... 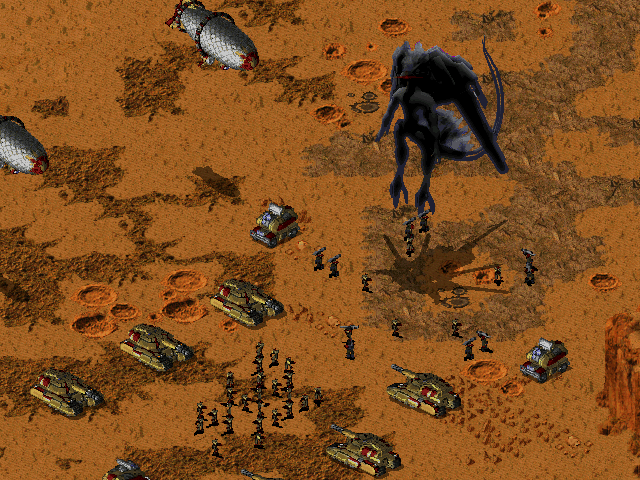 That one didn't seem to be particularly willing to help either...

No biggie, though. As they say, if you can't get an Eldritch Abomination to help you...
just build yourself a giant war machine instead!

Animation is just so beautiful in this old good engine. Just thinking how many months that took to make.

Black daemonic alien reminds me of Mephet'ran the Deceiver from Warhammer 40k. I want see it's animation too!

That black demonic thing was an April Fools joke, so it won't get an animation.