I've spent the past few months working on new terrain for D-day, I decided to take a brake tho and make this little know pre-war tank design with a famous legacy. 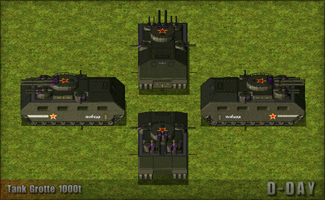 In the late 1920s the Soviet Union found themselves falling behind the rest of the world in tank development. While several projects where in development it would be sometime before they where ready, to help speed things up it was decided to invite experienced foreign engineers. One of the most prominent engineers was Edward Grotte from Germany who worked in the Soviet Union from 1930 to 1931. During this time he designed several different tanks, the most famous of which was the T-22 medium tank. His largest design though was for a 1000 ton land battleship, equipped with duel 304mm naval cannons in a main turret along with secondary turrets armed with 152mm and 76mm guns. Frontal armour was 300mm thick and the sides 250mm, which protected a crew of 40 and multiple naval diesel engines which would produced 24,000hp and propel the colossal vehicle to (an optimistic) 60 km/h.

After his work in the Soviet Union Grotte returned to Germany and became a director at Krupp, in 1942 he once again returned to the idea of a 1000 ton tank with the P-1000 "Ratte".