It's been quite awhile since I posted any new D-day news, that doesn't mean I've been sitting idle tho. I have lots of new (& old but unreleased) content to post, which I plan to start churning out on a weekly basis. To start things off tho here is a little known WW1 tank for the Italians. 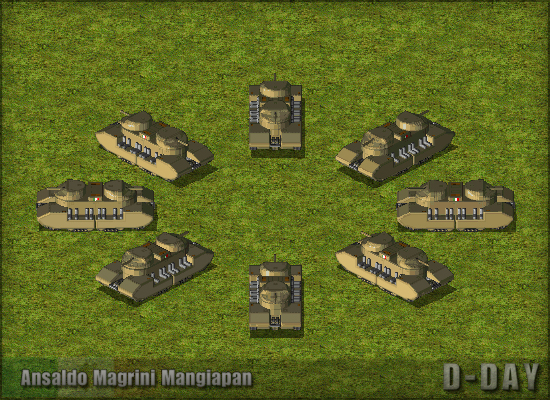 The Ansaldo Magrini Mangiapan was designed in 1916 by major Magrini as a "mobile fort" and was one of Italy's first tank designs. It featured multiple sets of tracks to help it traverse the crater filled battlefields of no-man's land. To power these tracks there were four 200hp engines in the centre of the tank which then drove two electric motors at the front and back, propelling this massive 70t vehicle to an estimated 20 km/h. It also unusually for that era featured two rotating turrets equipped with 76mm (some sources state 75mm or 105mm) cannons, as well as having multiple machine guns fitted around the hull. The design was approved by the direzione generale del regio esercito but was cancelled soon after because of the high cost and feasibility of such a complex design. Instead interest moved to the Fiat 2000 and purchasing tanks from France and Britain.

Are there new plans of implement new italian units