Tigers of the World

The Panzer VI Tiger is arguably the most famous and recognizable tank in the world, becoming the icon of the German tank forces of World War II. It's use was not limited to the German army though, several other countries used or planed to use Tigers during and after the war. Here are a few of them.

For more information and pictures click of the unit names to visit their D-day Wiki pages. 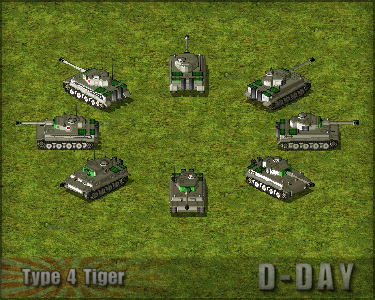 In April 1943 the Japanese sent 12 army officers led by Colonel Ishide to Germany to inspect and test their latest tank designs. The Japanese where quite impressed and negotiated to buy four of the tanks and their related documents and blueprints, the PzKfw III Ausf.J, PzKfw III Ausf.N, PzKfw V Panther Ausf.D and PzKfw VI Tiger. They hoped that they could be reverse engineered and the technology incorporated into Japanese designs. One of the PzKfw III's was dissembled and along with the documents transported back to Japan via submarine. February 1944 the Tiger tank was moved to Bordeaux in France so it could be prepared for transport. With the worsening war situation and then the Allied Landings in France it became impossible to transport the tank to Japan. In September 1944 the Japanese decided to give the tank back to the Germans where it was soon destroyed fighting in Belgium.

Note: The Germans charged the Japanese twice the normal price for the tiger. So in keeping with historical accuracy in D-day the price of the Type 4 is double that of the German version. 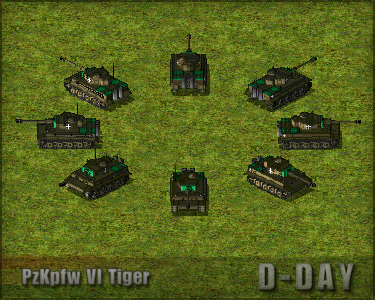 In May 1944 the Germans gave 10 PzKpfw VI Tiger tanks to the Hungarians and then a further 3 more as a birthday gift to the Hungarian Inspector of Engineers Laszlo Hollósy kuthy. They served in the Hungarian 3rd Tank Regiment, where in July they took part in the battle for Galizien district in Southern Ukraine. By December 1944 only 4 of them where still active, the fate of the final 4 is unknown but they where presumably destroyed during the Soviet invasion of Hungary. 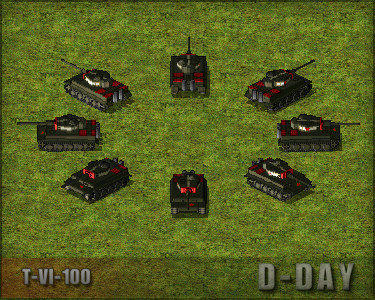 During the course of World War II Soviet forces where able to capture many German tanks in various states of disrepair, if at all possible they would be put into services against their former owners. These tanks generally had a short life span due to limited spare parts and ammunition. In an effort to help elevate the later problem several projects where started to refit the German tanks with Soviet weapons. One of these was the T-VI-100 which replaced the PzKfw VI Tiger's 88mm KwK36 L/56 with the 100mm D10 which was used on the SU-100 and later the T-54. As the war progressed the Soviets where able to produce an ample amount of tanks so the need to refit the German tanks diminished and the project was cancelled in 1945. 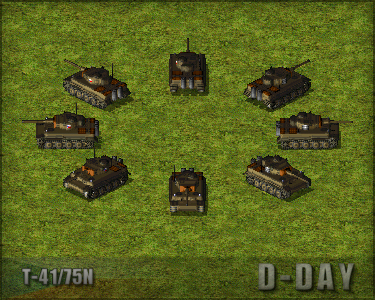 After the war a single Tiger tank was recovered from the battlefield and repaired by Skoda for use as a test bed for fitting their prototype 75mm A18 cannon. The A18 was originally built for use in the T-25 medium tank, the T-25 however was never put into production and it wasn't till now that the Skoda team could test it in a suitable vehicle. While the 75mm A18 was less powerful then the original 88mm KwK36 it was fitted with an auto-loader and drum magazine witch greatly increased the tanks rate of fire. Currently there are no known photographs of this unusual modification.

Note: To simulate the auto-loader and drum magazine this unit has a limited ammunition supply that can be fired quickly but then takes some time to reload. 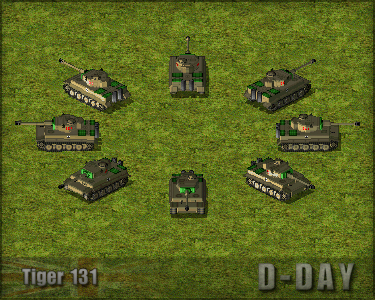 Tiger 131 is the only working PzKfw VI Tiger tank in the world, it currently resides in Bovington Tank Museum and features as the main star in the museum's yearly tank festival. Tiger 131 was constructed in February 1943 at the Henschel factory at Kassel and was then sent to Tunisia in North Africa. On 20th April 1943 it took part in the battle for Djebel Djaffa hill, during witch it received several hits form British Churchill tanks that jammed the turret and gun, as well as injuring the driver and gunner. The crew then bailed out leaving their disabled but still intact tank for British forces to capture. The tank was repaired using parts from other knocked-out tigers and sent back to Britain where it was displayed as a war trophy in various locations around the country for the rest of the war. In 1951 it was then donated to Bovington Tank Museum who put it on static display for the next 40 years. In 1990 it was then removed for restoration which involved a complete disassembly and reassembly of all it's parts. As well as fitting it with a new engine from a Tiger II, as the original had been cut in half for display at the museum. The restoration of Tiger 131 was finally finished in 2003, becoming the only tiger tank in the world to be restored to working condition.

Note: Because of the uniqueness of this tank and in homage of the fact it is the only working Tiger in the world, only one Tiger 131 can be built at a time.