(I don't remember why another nickname on Revora but still..

I prepared the Haradwaith Faction Plan and posting here as you asked (Including only changes):

Regardin the Risen Carrion and Zombies, I thought a Shaman is more fit to raise zombies through magic(be it active or passive power) rather than infection (inspired from african legends rather than modern horror). https://en.wikipedia...related_legends

Wade Davis traveled to Haiti in 1982 and, as a result of his investigations, claimed that a living person can be turned into a zombie by two special powders being introduced into the blood stream (usually via a wound). The first, coup de poudre (French: "powder strike"), includes tetrodotoxin (TTX), a powerful and frequently fatal neurotoxin found in the flesh of the pufferfish (order Tetraodontidae). The second powder consists of deliriant drugs such as datura. Together, these powders were said to induce a deathlike state in which the will of the victim would be entirely subjected to that of the bokor.

I also uploaded a zip with 3 categories of artwork Architecture, Units(my proposal for units and some equipment) and a third with some artwork maybe you will find inspiring. It has also some explanations (as, for example, why the Wyrm).

Also, my proposal for architecture would be that when buildings rank up, they become "less tents" and "more mid-eastern" buildings (obviously preserving architecture elements such as mumak horns). I really like the style of the Wall, Towers & Gate artwork. The other Corsair Palace / Umbar Market, I really don't know. Maybe integrate it somehow in the Pavillion of Haradrim Kings and/or Fortress.

Here(available for 30 days but I can send it on moddb from some other site if you need it later): https://ufile.io/80wlz

EDIT: Now that I think of, maybe the Black Numenoreans need more thought to put on (in terms of helmet and armor design) The shield is ok. I might post some updates and artwork.

Thanks for your research into zombies.

The architecture concept art that you linked is by Angelique Shelley, a fantastic artist. I'm going to link it properly here.

Palace of the Corsairs, Umbar 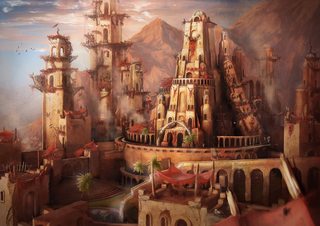 The Market of Umbar 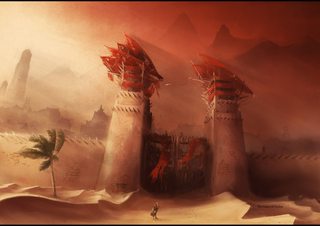 The Golden City of Umbar 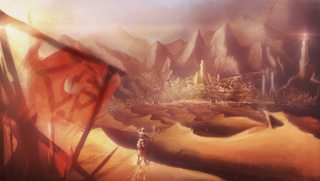 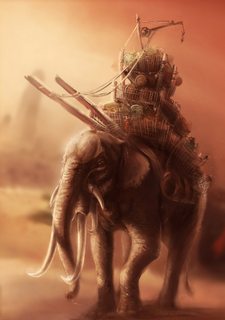 I didn't know they were by the same artist but they're wonderful, that's why I chose them.

The only thing to notice (regarding always this mod), is that the Haradwaith faction covers more than just Umbar so Numenorean/Gondorian style mixed with middle eastern might be limited only to some buildings(not all of them).

The "Umbar Gates" with old stucco walls with spikes and tents is closer to what I imagined for most of Haradwaith buildings.

Tolkien always considered the men of east/south not as barbarians but as different cultures!

I'll respond when I have time. Thanks for posting!