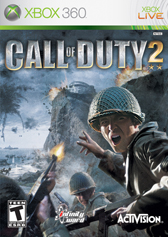 A damn good game, lacking in some aspects mainly the controler layout when driving the Crusader Tank, also the fact that if you try to aim while prone, you can't be looking through the crosshairs, which mean's it's counted as moving. Not much else to say other then that it's like any other shooting game, except for the fact that if you are behind a wall and a grenade goes off, the wall actually protects you unlike in some games

. Ok so it's not like any other shooting game, it comes close to Halo, of which I am an avid fan. So I don't say that lightly. Anyway there are also something that must be worked on in the 360 version, the voices arn't surround. If you face someone who's talking, it's quieter then if you have your back to them. It's like that in Quake 4 as well. Weapon textures can get plain at times, but over all they are awsome when combined with the bump mapping. 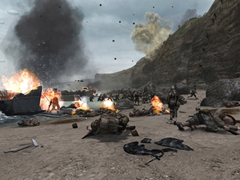 By no means should you ever only use the rifles, use atleast one machine gun and also a rifle. The rifle being for medium to long range and the machine gun being for close to medium range. Also despite the reduced accuracy when holding down the trigger with a machin gun, the MP44 and Thompson can hit targets at long ranges when fired in single to three round bursts dealing a lethal blow. Don't use grenades to much the AI has a habit of throwing them back, most of the time with just enough time to spare allowing them to get it in their hand and almost throw it before it blows up in their hand. Smoke grenades are a pain, both when you and the enemy use them, since neither side can see a thing in them, but if you can throw one in front of a heavily fortified position or you are under attack from multiple people comming from one direction, then toss the bugger out ther and then make an escape in the direction you arn't being shot at from, in most cases the idiot (human) will keep firing hoping to hit you, revealing his position. Anyway I give this game a 9.5 out of 10. One worth buying.