Large and in charge

Well population of the CNC community, I have another update for you the third in the past week. This time the new Slayer Tank model. The Slayer also known as the Anti-Personel Tank has been balanced in ways such as cost increased, removed the Gatling upgrade, added the ability to upgrade it with either an AP Rocket or the ability to tread water. The rocket is good when you use the infantry general since he has no real anti-armor, but also does well against lighter vehicles, but if you would rather move through water, then be my guest, but remember some maps don't have water, but then again some maps might not allow the use of the rocket due to barriers. 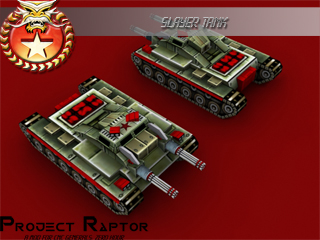 I would also like to give you an update on unbuildable objects, no image for this yet, but I'm talking about trenches, pre placed.

Didn't i see that tank somewere b4

SW has one based off the original I had, which they now remodeled. I had actually modeled this a while back, just never got around to skinning her. Actually, I will be posting an updated image in a bit, since I removed one of the back housecolors to make way for something else, which actually gives you three optionable upgrades

Someone is back and I like the speed of the updates. V 8 will be here in no time if updates keep coming. Good work Vanguard keep it up!

I'm sure i saw that tank in another mod but wat?

You know my old one, Shockwave used that for their Reaper Tank, they made alterations, then I remodeled mine, but never skinning it, Shockwave made a new one similar to mine, although mine has clips and a raised crew area, I also came back and textured it. There will be a poll for this in about 5 minutes after I make this post stay tuned.

Oh that's were i saw it it really looks similer.

I already told you the back HC on top is the placeholder for the weapon mount which mean's it's going depending on what you upgrade it with that is, although the look of the HC will change in look. Also I have removed some other things, keep it down Hunter, I wasn't even trying to copy at all, I just based it off my previous design, made a few alterations, added 8 barrels instead of 10, kept one HC from the BM rear, added another as a placeholder, raised the crew area, added some clips, added multiple lights, added the heavy armor upgrades in the pic, which are the brown boxes on the sides of the rear, bottom front, and back, most of which currently can't be seen. Remember I havn't been around much lately since I have been modding EAW so my mind was fresh, hence I havn't seen any updates lately, so I really wouldn't know unless I saw a pic of yours, which I just did yesterday, so I apologize for it. Although I think people pay more attention to your updates so they will probably think I copied you. Ideas can be similar, not the same model (trust me poly count to high to be yours

, 704 polys), remember I go for more detailed models as to rely less on skins, but will do my best with skins for them to make them look better, you rely less on the more detailed model part then I do. If you don't want me to use this that's fine if you want to redesign it for me even though I modeled this about 4 months back be my guest I will even texture it, if not I am sticking with this.

I guess I will delete my current grenade launcher, since it has a giant rounded clip, I can't make it have one of those, oh no, that would be copying Shockwave

so the boxes on the back are your idea too eh and the cockpit on top is too ?

it's all part of ICE's original anti personal tank which he gave to me to use'.
and that those boxes on the back where my own idea to add i highly doubt you got that idea yourself knowing you. 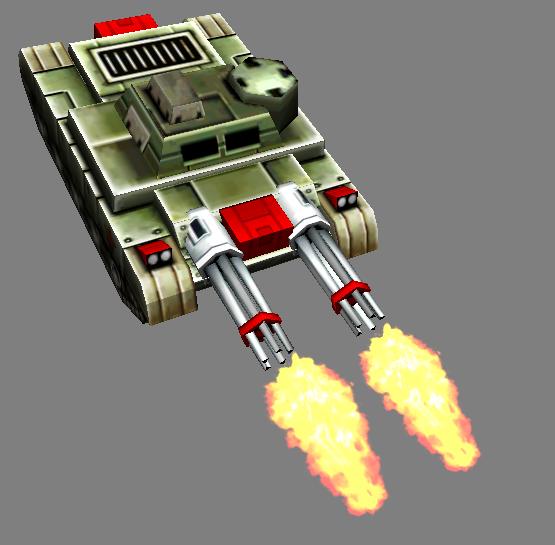 and my final re-design

VG's is still different then that one u got

The boxes on the back as I said are part of the Heavy Tank armor upgrade, and I thought you used my old APT model, but altered it? As for the crew area my old one had that aswell, but it was longer, here on mine I raised it, added an entry area to the back, and shortened it. Barrels were lengthened, made thinner, as I said ideas can be similar, AFAIK you copied me in the using of this design considering I had this in PR before you decided to use it, just not this model, just because I have several HC and boxes in a similar area doesn't mean I copied you. Also the crew area is in no way the same, look at my design and then look at yours, yours rests on the chassis itself, mine is on the support fins. BTW, you can make the images smaller you know, like links to the images

Better then argueing I have a better idea.

Hunter are they the same?

If you look closely,I can see some similirities.
It seems that you just rise the cockpit and add some details.

The weak will perish

Frankly considering that the idea for that tank is a common one, I would not find it hard to believe that two tanks of the same basic format created by two different people, on their own, I wouldn't be supprised that they would be at all simular. However they are very different, if you will look at the number of gun barrels VG's has 8 while Hunters has only 4, the shapes on the top are compleatly different, unless you look at the basic overall shape of the thing. I mean boxes are a normal common thing to use, the positions they were placed on both tanks were perfectly reasonable, and could have easyly been done by anybody. I like Vanguards tank better though... It has the half circle things just above the main barrel, which look really cool, along with the little lines, and groves in the design of the tank, more shooting barrels also looks cool on it.

not to say that they don't both look awesome.

ahhh still the same wargames, with the exception of a few things."

The question is are they the same?

The answer is no.

The updates have only been coming because someboody *glances at VG* has finally gotten down to skinning.

Inside joke, it doesn't matter if you don't get it.

You know my old one, Shockwave used that for their Reaper Tank, they made alterations, then I remodeled mine, but never skinning it, Shockwave made a new one similar to mine, although mine has clips and a raised crew area.

Yea the do look a lot the same but they have some differences, they probably want act the same in gameplay and they do look a bit different.
So I wouldn't say it was completly copied.

hunter, your mod looked really good on the video but it made my game have serious errors so i found project raptor which is equally as good

p.s. whats the name of that music at the start of the video for shockwave?