Urgent Battlefield Report - Eyes Only
From: 'Nighthawk', Agent, Allied Intelligence
To: <name corrupted>, Commander, Allied Defense Forces
Commander, while we've been pre-occupied trying to get as much information on the Future Forces as possible, we seem to have neglected the other threat to our peace, Yuri. We originally thought he did not pose as much of a threat as he seems to have been holed up in Antarctica all this time doing God knows what, but he appears to have re-organised his forces entirely. Today at approximately 0200 hours, Yuri troops under the name of the 'Atlantic Legion' have seized the Russian city of Novgorod. The Soviets, who only had a small garrison in the city, were forced to retreat. The city is now in Yuri's hands. One of the Soviet soldiers stationed in the garrison, a Mladshiy Leytenant Rovodinsky, managed to snap a sizable view of one of the Yuri occupation zones as he retreated from the city in a MiG bomber using the bomber's black box. Here is that picture, unfortunately with most of Novgorod's power grid in chaos there are very few light posts running in that area of the city, and Yuri's "mood lighting" doesn't help much either, so we have lightened some of the areas so you can get a clear view of the area. 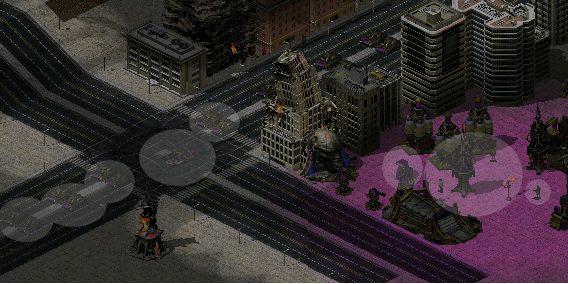 .
It seems that this 'Atlantic Legion' uses different vehicular units to those normally used by Yuri, we can see several heavy-tank like vehicles driving down the main road, and one rather large double barreled unit in the centre, which was unfortunately the poorest lit of all. The Soviets believe it to be an improvisation on their Apocalypse tank, but we are unsure of its armament. We have a glimpse of one of Yuri's new Sniper Turrets. These are basically the British Sniper in turret form, though we've seen them use various types of ammo before. We can also see several civilians being kept in the base, most likely for use in Yuri's Bio Reactors, and we can also see that they are being closely guarded by one of Yuri's rumoured Special Operations infantry, a Savant. Be careful of those Commander, they are armed with high-energy railgun weapons, though until now they have been largely unseen.

More information will be brought in on this incident as we can get it Commander, but for now, Novgorod is a no-go area without clearance from Command, but the Soviets seem keen to send in a strike force to retake the city, Command's not going to risk arguing with them, but you are not to intervene until ordered.

Out-of-character note: I thought I'd go back to the 'in-character' news posts again, they seemed to get the story across better than normal posts

Dragon Awesomeness for the Win!

Cool stuff there.
OmegaBolt had railgun troopers in his mod though.
Still, I haven't seen anyone else use it.

Heh, he can still use it. There arnt that many logical options for Yuri anyway.. unless you redesigned his style and army, which I always thought of making him more terrorist.

Heh, he can still use it. There arnt that many logical options for Yuri anyway.. unless you redesigned his style and army, which I always thought of making him more terrorist.

Terrorist army like Mooman's mod? Yuri is NOT a TERRORIST ! He has no need to terrorise people if he can just control them to do his will

The Sovie Barracks was used in Mooman`s Rule

*gets splattered in glasses and they break*

Havent played Mooman's Rules so I wouldnt know, but psychic tech is so limited anyway.

for answer to sniper turret

I read that the effectiveness can be restored by altering the global Threat Evaluation entries up at the top of the rules to their proper valused. Also, the Barracks is the Soviet Prerelease one from PixelOps, which is used in Mooman's mod, yes. The TRN originally had a Sonar Pulse ability, but it caused crashiness, fortunately though in RP 1.09 I've read that the Sensor logic will be restored, so I can do the Sonar Pulse another way

, but for now it'll just be left out.

When will be released this fantastic mod for people?

As I've said to every person who asks me that question time and time again, I do not have a set release date, the mod will be released when all 3 of these conditions are filled:
a) when it is finished
b) when I have the time to release it
c) when I feel like releasing it

Also, as a side note, I'm going to post this as a pinned topic so maybe everyone will read it and not ask about release dates
Thanks for the compliment though

wen can we expect the thing to be done ?
it sonds cool

~Edited by Nighthawk - too many ? marks.

Back to The Third War News