29 replies to this topic

You heard me correctly, the mod is actually out! I'm so excited, I can't really say much about the mod, except PLAY IT! If you want to download it, click on the banner below or go to the downloads section of the site and click the banner there!

A few notes as to what was changed:
The "Extra Beer" upgrade is not included in the initial release, I plan on having it in release two, scheduled for Early Jan.
Several of the new units do not have voices and/or portraits, I'm still working on those. Expect to see them in release 2.
The Rohan Barracks does not have a build up animation, will be in release 2.
None of the new buidings have damaged Skins/models yet, will be fixed in release 2. 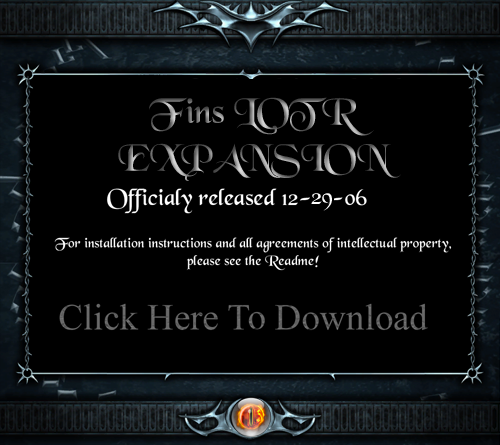 Icant download the mod please give me the direct link

perhaps im not lookin in the right place, but some new info would be nice fin, i know this adds a rohan faction, any other factions or inprovements to the other factions?

although, I really doubt it

anyways, from the readme

The LOTR Mini-Mod was created to make the game BFME II more like the Original (BFME I). So far there have been many changes implemented, and many
changes yet to come! This readme includes the greater bulk of the changes made. NOTE: The CaH doesn not work with the new factions. Sorry, but I did
all I could do in a feeble attempt to get it to work. Many other great modders have also attempted this, and failed. This mod has been succesfully
ported to ROTWK. After the Rohan Beta is released, this mod will take an entirely new direction. While most mods concentrate on improved gameplay,
this mod concentrates on making the game more fun. Take the "Extra Beer" upgrade for instance. What mod lets your peasants go on drunken raves
against enemy uruks? It has recently been re-named to "Fin's LOTR Expansion". Why? If EA can add one faction and call it an expansion, so can I!

and Fin can post the rest if he wishes

For no good reason at all, just so we're clear.

im now playing it, its looking good, but there are some bugs,

wall hubs have no build time, the wall into cliff model piece is gondors.

there is plenty of art missing (as you know), but alot of it could of been scavenged from the bfme1 files

The direct link was posted by Fingulfin in the first post of this topic.

The image at the top is the direct link

If you need just the URL, here it is:
http://fingulfin.the.../FinsLOTREX.rar

@Tom: Oops! I forgot to stick the castlemember thingamablobby into the wall hub, so it doesn't build up when built from the plot. As for the cliff cap, that was just me being lazy. I'll fix it for the next release

Another bug: Gamling has no powers. I totally forgot all about those, I'll make sure to put them into the second release.

THE BIGGEST BUG: I stinkin forgot to put the Ent moot into the Rohan AI! In other words, they won't build siege weapons :(

I hear that some of you need the readme, here it is:

I probably forgot one of the wall armors... Which walls were destroyed?

happy new years. First of all: An absolutely fantastic mod! The only thing that is still missing is ARNOR! If you add this, the game finally would be the one I have ever wanted! GREAT JOB! Really.
I've been testing your mod for 3 days now ... And I still can't decide if I do like Rohan or Gondor more ... You made it damn hard to me! ;o)
Anyways - ahm there are still some bugs I'd like to show/tell you. But the list is quite too long for writing it down here. So could you give me a short response to my own e-mail address <MBouray@web.de>. This way I could send you my improvement suggestions (bugs) I have found and made pictures of.

Thank you in advance

I have downloded and installed the mod but when i try and run it and error is displayed and the game closes, any idea why???

I will post a sceen shot of the problem later today

also thx for the help

The best mod of all but it neads several fixes like CAH or hero - hordes.But as i sayed before it was good present for the New Year!!!!!!!!!!!!!
Fingulfin please loock the ideas i had posted some ideas for your mod there.

Posted a comment on MEVault. Dunno if you already sent me an e-Mail or not. Please enter into the subject matter something like "Fingulfins Comment" "Fingulfins E-Mail" or so ... 'Cause I get so much spam per day. It ain't funny. Anyway I'd like to repeat: Your mod brought fun back into the game. ROCK ON Buddy!

@Gary: Odd... Try uninstalling and then reinstalling the mod. To uninstall it, go to "C://Documentsandsettings/yourusername/applicationdata/myriseofthewithchkingfiles" and delete "FinsLOTREx.BIG" from the directory. I have no idea why it is not working...

@Thrândoér: Haven't gotten around to it yet, Sunday is a busy day for me. Right after I get back from bowling I'll send it

@Guest: As I posted in the other topic, there is nothing I can do about the CaHs :( It is something that EA screwed up, and something only EA can fix. As for the other Ideas, I consider them all very seriously. Just remember that no major changes will be made until after release 2.

I get the exception adress violation error, when i try to launch skirmish .
Oh, nevermind, I tried to play with Rohan in Minas Morgul, I didnt know that wouldnt work