This is a basic overview of the Russian Side. All things are subject to change.

I don't think Russia uses Shilkas much anymore... Tunguska is the one they use now.

Thanks for the heads up

I'll change it around.

Thanks for the heads up

I'll change it around.

Are we still adding the BTR-90? We need amphibious units in the game!

Yes, it is on the master List I have, I just havent updated these posts yet because everything keeps changing.

Bmps had that option but there many kind of units for infantry transport along battlefield.
also if it was said that the mod time 15 years later then we might take out t-80 and replace it with new russian tank with automatic turret its a sceret tank in current development but ill be ready by 2008 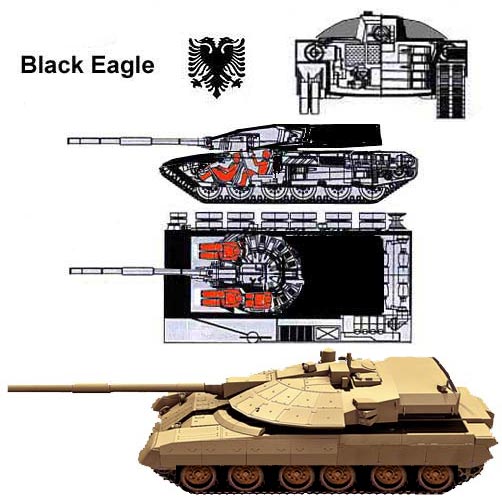 Until recently, there were hardly any details about the tank except for a couple of words and a poster on the Defendory 1998 held in Greece.

According to the information I have, this tank is being developed in cooperation with and for export to S.Korea and may even feature Korean thermal imagers. It will not be fielded with the Russian Army and seems to be entirely an initiative of Omsk Plant. It originates from the now-closed Nikolai Popov's design bureau at Leningrad Kirov Plant (LKZ) and is now developed by Alexander Morozov.

The tank is built on a T-80U chassis and will borrow most of its components including FCS from T-80U.

The most significant difference between the new tank and T-80 is the completely redesigned turret (at Omsk'97 a full-sized mock-up was presented) and the lengthened hull with 7 roadwheels per side.

The new turret will have a larger degree of protection than the current Russian MBTs. The steep slope of forward armor plates on the turret reflects designers' desire to maximize protection from APFSDS rounds in a duel situation, when tanks fight "face to face".

For additional protection, the tank is fitted with Kaktus ERA and the new Drozd-2 APS.

It was originally planned to install a 152 mm gun that is being developed for a future Russian MBT. However, since this tank is not going to be fielded with the Russian Army, it carries a 125 mm 2A46M-series gun.

Another innovation is a new automated ammo storage/loader, located in a turret bustle. It is separated from crew compartment by an armored bulkhead which greatly increases crew survivability. This design has several reasons. First, the Chechen war has shown that the carousel used in T-72/T-80/T-90 is too prone to ammo detonation when penetrated, invariably killing the crew. Second, adopted configuration also reduces Black Eagle's height by 400 mm by comparison with the T-80 (Perhaps a typo here, since this means that the tank is a mere 1.8 meters in height). Finally, horizontal ammunition arrangement in the turret bustle permits using longer (and therefore, more powerful) APFSDS rounds, unitary ammunition, simplified automatic loading process and increased rate of fire (expected to reach 10-12 rds/min).

Black Eagle's on-board information system monitors all essential systems of the vehicle, and permits automated data exchange with other tanks and headquarters.

VTTV-Omsk-99 exhibition have finally revealed the complete vehicle (referred by KBMZ as Item 640) without any netting. Several features became immediately apparent. It was apparent for the first time that the vehicle's hull is not taken directly from T-80U as was originally believed, but was significantly redesigned, the obvious change being the 7th roadwheel. It seems that most of the additional length has gone into the raised front hull protection and greater glacis obliquity. It also raises doubts if the tank indeed stays in Class 50. The active protection system appears to be Drozd, not Arena, derivative. Although the tank indeed carries the 2A46M maingun, it was stated that provision is made for installation of a new 152mm maingun. This implies that Omsk still hopes to win the hearts of the Russian military with this new tank. Since Russia will be tank heavy, I will add this to the list and keep the T-80

Good find, this is a cool looking tank

Good idea, THE MORE THE BETTER!!! sorry (i say that too many times)

anyway, ive heard of the black eagle, I have about 3 vids on it, it truely is a master peice, but os completely different than all other russian tanks

Sorry for the double post, but isnt the Mi-28 Havoc going to be in the Russian faction? the Ka-50 is an Anti-tank heli, but we need one that can engage other helis, and move at fast paces (scouting, evading, etc...)

here is a pic:

Looks cool, I add it to the list of things the team needs to talk about

The Mi-28 is an anti-air, anti-perssonnel helicopte, with a radar on top. Its not as effective as the Ka-50, but unlike the apache and Ka-50 it can engage other helicopters easily. it could probably be used as a scout becuase it has very long range.

why does Vasily doesnt have one of those?? if it can engage ppl for ala he would use it againts bears... lol

What happened to the su37? I'm a fan of the Berkut and all but the Terminator is the most likly of the two to enter service

is it possible to upgrade the troops to carry the AK 100 series weapons? 15 years in the future I think they might consider replacing them with

in case you didnt know, The Su-37 is no more, only two were made one was taken out of service the other was converted to an Su-35. I also love the Terminator, but I doubt it will enter service anytime soon. For now the Berkut is our main fighter bomber for Russia....

Thats true, but the chance of the berkut entering service is even slimmer, its part of that MFI project, its only a prototype and theres only 1

Right, but we need something that can compete with the F-22 or the J-10, and I think the Berkut is perfect for taking on an F-22...

What happened to the su37? I'm a fan of the Berkut and all but the Terminator is the most likly of the two to enter service

The Terminator, while being one of the coolest planes ever made, is extremely similar to advanced versions of the Su-30, so just to change things up a bit...

Thats true, but the chance of the berkut entering service is even slimmer, its part of that MFI project, its only a prototype and theres only 1

The Su-47 is being developed as the PAF-KA as a joint Russia/India/Sukhoi deal.
[/quote]

Whooops, my bad, you are correct

Russia don't use Shilka and BRDM-2 anymore... Shilka was replaced on 2S6M Tunguska-M1 and 9K96 Pantsyr-S1 (in nearest future) and BRDM replaced on Tiger and GAZ-39371 Vodnik//

Su-47 Berkut is not a PAK FA. Berkut is flying now but PAK FA is only is in development. First flight is planned on 2009.

Back to Tactical Warfare