There is just one ship, there is plenty of fodder to throw around. In the name of the League there will never be a surrender. Death to the machines!

Nexus second fleet commander: You bother with those lowly humans? Just kill them and be done with it so I can send that tiny scrap ass back where it came from!

CMDR Caspa: Load weapons! We can deal with those pesky humans when we have feasted on this fool! 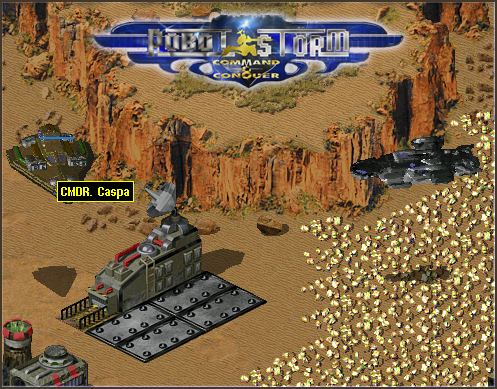 Just giving honest opinion. Just because it's RS, doesn't mean I have to like it.

*prays to machine god* I didn't mean it!!

I don't like the golden one, it's colours look to wierd and it reminds me too much of the Imperial Star Destroyer. But the other one... Can I marry... Wait, that is covered by the FAQ.

Seriously, the grey and black one would look kickass if you gave it some sort of 4-burst blue plasma-ball weapon.

Dragon Awesomeness for the Win!

If that gold unit is what I think it is, it's trouble for whatever is in its way. It's one nasty unit.

The other is just as bad. BTW, it would be fleet command AI, not commander for NEXUS.

EDIT: Have you gone and changed RS's health bars?

Rumor has it that I'm Awesome.

I agree for the most part, I dont really like the ships. The buildings look nice though.

I want that other ship to be my mothership...

Good updates for RS gamemate, I look forward to the next patch for RS so keep up the good work and good luck with the future updates for RS!!

Well, we couldn't do a pyramid ship...

so horizontal one kinda had to do

anyway news did its purpose to show difference between nexus and osiris so no aliens look or yet another really fancy glow look side, nexus and AL are enough on that area.

)
Well i must say im iclined to agree with omegabolt regarding the Caspa unit, I mean don't get me wrong it's a fantastic piece of work, but it does look like a star destroyer, but i like the colour tho!
The other unit looks excellent!! But yeah it is just a tad remeniscent of the TS dropship.

But on the whle great work! mouth wateringly good some might say!

beyond the eternal pleasure of war, when the dead rule and the living die, and the pain of destruction has reigned. when skulls are crushed under the threads of heavy metal. when this time comes i shall arise and rule you all HAIL TO THE KING. praise all forms of xeno for they inherit the future

Road test? Me? But I gotta go save the world!

New units are always nice to play with.

But that air pad bugs me... that radar, and the pads seem kind of weird...

Apollo i think u just let the name of the 4th side slip... u called them Osiris... as in the ancient Egyptian God Osiris? u do know Osisris was a female right?

Isis was the goddess most closely associated with him.

But yes. The name Osiris has been revealed for ages.

Back to Robot Storm News