Designed by Leyland as a improvement on the Crusader and Cavalier. As with the Cavalier, this tank was an interim development using the Liberty engine. Centaurs were used for training and special purpose roles. Years of service were from 1942 to 1945. The ARV was equipped with a crane, an oxyacetylene welder set, steel cables and anchors.

Made by Renault, the UE supply carrier (named Chenillette d'Infanterie type UE) was loosely based on the Carden-Loyd Mark VI carrier. Carrying a crew of two and no armament, it was used primarily for supply transportation, often towing a tracked trailer. The captured vehicles were used by the German army, also by the Free French. Many variations were developed. The first mass production T-34 came to the tank formations of the Red Army late autumn 1940. However, the planned fighting training has begun only spring 1941. Unfortunately, much reorganization of the tank troops that were conducted last two pre-war years influenced negatively on the mastering the use of the new tanks. 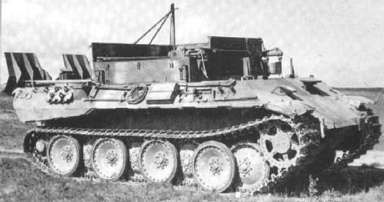 On March 29th of 1943, it was decided to produce recovery version of Panther for use in the Panzer-Abteilungen. In June of 1943, MAN produced original 12 prototype series Bergepanthers which were turretless and modified Ausf Ds returned for repairs. Production started in July of 1943 and Panther Ausf A and later Ausf G were used, although production was slow and various modifications were made during the production. Early Bergepanther was armed with 20mm KwK 38 L/55 and later on with twin 7.92mm MG34 or MG42s. Bergepanther was operated by the crew made up of commander, driver and mechanic. It was fitted with a 1.5 ton lifting crane and other recovery/repair equipment (eg. large spade, 40 ton winch etc.), some of it especially designed. Overall, only 347 (240 Ausf A and 107 Ausf G) along with 12 based on Ausf D were produced from June of 1943 to March of 1945. Bergepanthers were produced by Demag(Benrath), Henschel and MAN. Bergepanthers equipped Panther-Abteilungens (starting in August of 1943), schwere Panzer(Tiger)-Abteilungens and schwere Panzer-Jager-Abteilungens (starting in January of 1944) along with some independent recovery and repair units. Some Bergepanthers had their recovery equipment removed and were modified to carry ammunition, designated as Munitionspanzer Panther. Bergepanther was the best recovery vehicle of World War II and after the war, some captured Bergepanthers were used by the French Army until mid 1950s.

Lancia 3RO was one of most famous Italian Trucks, it was used extensively in all fronts, in particular in North Africa. This versatile unit was famous for its variants. Anti aircraft, troop transport, generic stuff transport, and Repair vehicle which had a complete repair kit and mobile tools. Its design was simple and functional, and was appreciated by several mechanic divisions.
NOTE: This unit won't be buildable. To replace it field mechanics will be buildable.
Dimensions: 4.3 x 2.9 x 2.76 (h) mt
Armament: N/A
Propulsion: Diesel Lancia, 93 hp
Speed (Max): 85 km/hr
Armor (Max): N/A
Crew: 2

This vehicle had both tracks and wheels and it had a mechanism to move the wheels up and down, so it could change the mode between railway and track quickly (one minute to track mode and 3 minutes to railway mode). The width of the wheels could be changed in the narrow, standard and broad gauge. Ri-Ki was used in order to guard railways in Manchuria by railway engineers and some were also used in Burma. Ri-Ki is the engineer vehicle for field works. It had a 3-ton 4.5m-boomed crane.

thanks, wait to see other version

I have some problems with TT34. I need pics and data