44 replies to this topic

Thread cut down to buildings. 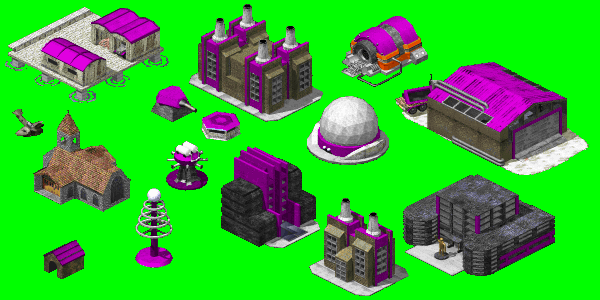 Here's a random selection of buildings I did for the ModDB page, I think one or two of them haven't been seen yet.

Church is exactly how I pictured it'd look in stock RA2.

A great job mate. Can wait to get some crates

Not quite finished this yet.

Crates I keep doing and forgetting that I need to convert them in a different palette...
Soon

they look wicked mate keep the good work up

The hospital is rather grim and unpleasant for a medical facility. =P more like a gigantic mourge. Anyway, will it and the Tech Center have a purpose in MP?

I'm doing the Forward Command Post, Bio Research Lab, Oil Pump and a few civilian buildings aswell. It's mostly for if someone else decides to try and remake any campaign missions (one or two people have mentioned it).
As far as MP goes:
Tech Centre/Prison is on the map "Them!" as the building storing Ants.
Hospital replaces the Tech Hospital.

Good point about the Hospital, it looks like a fortress or something - might try a different main texture that's a bit cleaner.
Then again, hospitals are grim places

Secret Lab is gone at the moment, and I can't really replace it with the Tech centre as the Secret Lab is alot smaller (so there'd be overlapping buildings and stuff in normal RA2 maps).

There is no single word that can describe thses buildings

Realism is so overrated it isn't even funny. You already know what happens in reality, how is that entertaining...?

Silo (for the sake of completeness).

Wow, amazing work daz!! but that flametower looks like the one in A path beyond (renegade mod).. but in normal RA1 if i recal.. it only had 1 flame cannon?? or am i wrong?

The Flame Tower doesn't have a turret, so it has cannons positioned around it. They're only like 1 or 2 pixels in the Red Alert .shp, but they're there. If there was only one the top section would have to rotate like the SAM/Gun Turret do.

it simply PWNS. i love ra1 hope you finish it soon.

Just had a bit of a HD scare, my PC stopped booting up and we've been having alot of lightning storms lately.

Had to reinstall windows, luckily my files were still there. Backed them up and wiped the HD (it was messy, things were on the HD but not linked anywhere and it's just easier to start again), reinstalled windows again and here I am for the second time in a month with a completely empty PC.

In my haste I forget to backup my e-mail accounts and favourites (the latter being a major pain in the ass), ICFRA and my 3dsmax files are all backed up twice though

I could have had all the tech/civvy stuff done today but obviously someone decided I wasn't allowed to, gonna have to put them off a while. Tomorrow is going to be windows update and install screens for at least half a day.

i hate those days:)))). had some of them that didn`t quite where welcome in my life:P

Finally got everthing sorted (only took all last night and 3 hours today..).

Working on the Outpost, it's going to be this plus a mini Service Depot at the side. Need to add some weapons to the tower too (mounted missile launcher, possibly an mg too).
No prizes for what the inspiration for this was