Lets start with the most important issue - finding new/more HEROES for them!

I found a really good model here that we could use from BFME+. I only need to reskin it (color-wise) and then settle for WHO he would be Since he wouldn't be Dain off course)

So, lets start out in this thread with suggestions for Dwarven heroes. I know the problem will mostly be (probably) that most knows ones are dead in the Third Age... (like Balin) so I'm not sure how far we're gonna push "realism" in terms of that. We have to have heroes, and I prefer known but dead heroes than unknown made up ones... That's why I added Smaug after all!

And heres a really good model we could use as a sort of "standard" Dwarven Warrior/Axemen. Light armored but faster maybe? Kind of like a counterpart to the elven Lórien Warriors =p And just look at the variety of gear - this is the sh*t we want for SEE

I would reskin these too though, but the models are great! =)
*REMOVED*
*REMOVED*

EDIT: I removed the models since Cahik didn't approve (of reskinning). I'm sorry for the confusion, and I'm sorry to Cahik if I offended you... /Naz
----------
EDIT2: Added a screen for unused units in BFME2. The middle top one is what we use for Berserkers. We could ad the other two for more variety amongst them plus we could use the Miner as a "Peasant" for Dwarves... =) 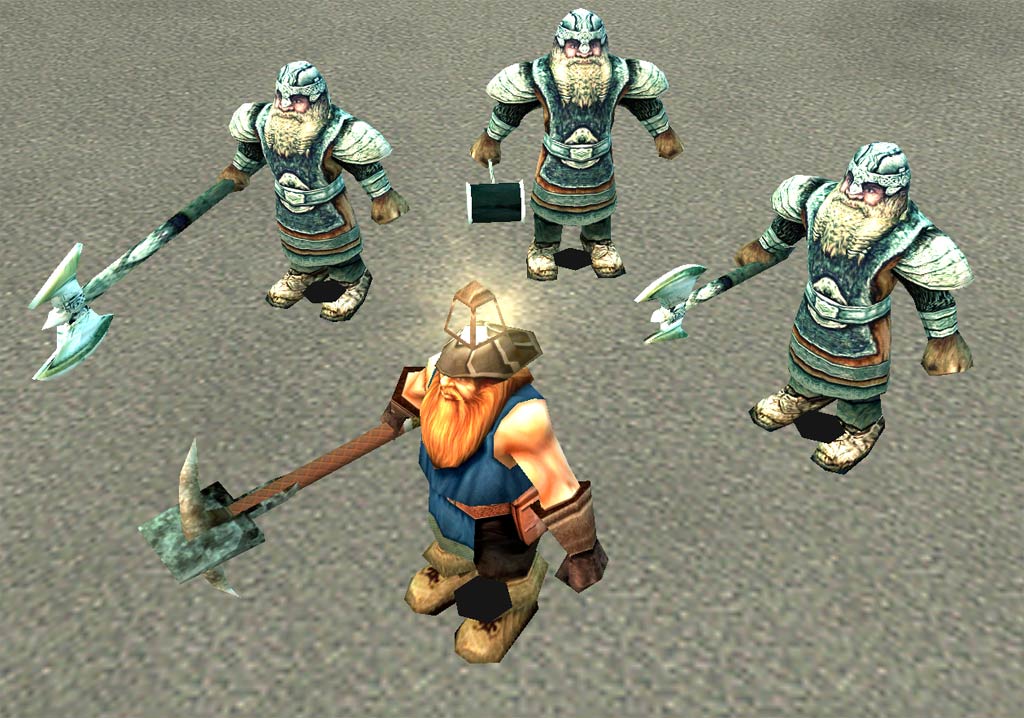 And yes, those are actually skins by EA... Looks like they been bathing in tooth paste if you ask me... LOL

Looks nice, though I don't have many suggestions, besides the idea of the Man who slew Smaug...


His name escapes me, but he could basically be a sort of Legolas for the Dwarves.

That new model could be used for Thorin Stonehelm, son of Dain. Other heros could be Dwalin, Brand and Radagast. I also suggest that the Dwarven Banner isn't a blue pattern on a yellow background, but the Crown of Erebor on the one of Dwarven Warriors.

How about you can add swords to these Warriors and make em Warriors from Iron Hills?

And the Nertea models (yes, I'll keep whining about them

I do like the idea of warriors from the iron hills, for heros you could always stick in Gloin, Gimli's dad, or Groin, Gloin's dad. If you wanted to go REALLY ancient stick in Durin the Deathless. Aptly named.

Well, since Ring-Wise, we could end up seeing the Fellowship anyways, perhaps have Bilbo as a hero here?

Don't know of any good skins, but i'm sure a Frodo model would work.

hmm...i am not very happy that you want to reskin those. it takes me quite some time to do those and i belive that they look quite good.

Allright, I'm sorry Cahik, I though those were all "free takers" since BFME+ was cancelled.

The models are super, but the colors are too bright to fit in with the other units.... But that's fine, you're the boss of your own creations naturally so I won't use them for this mod. Sorry if I offended you...

What?! Not use those glorious skins?! I personally think they don't need any changing and they are useful to your ambitions, Naz.

Nope, sorry, the colors won't fit the mod at all. They would stand out way to much with those festive colors. I'm NOT saying they look bad, they just didn't fit the colors given to other units. Same with TDP's Khazad Guard actually; excellent model but too bright colors for the SEE theme... ;p

Now I never thought of the possibility that Cahik would be offended from me reskinning models that he doesn't use anymore. If I would have thought he could, I would naturally have asked him before I said anything =p

But it's no biggie... I guess our modelers can come up with new Dwarven models and skins for SEE eventually

Ok, so....if you want my opinion I think Dale should be the minority of the faction, being only dale archers. I like the idea of dwarven archers, and they could get explosive arrows. Iron Hills warriors armed with heavy Mattocks would be interesting, too.

For the Heroes....does every Dwarf HAVE to weild an axe? I had a great idea for a dwarven hero that could template pretty much anybody you chose. Basically, it's a dwarf holding a crossbow. This dwarf highlights the technical side of the dwarves, being able to manipulate enemy structures. Thoughts on his powers:

If the dwarves had a sniper unit, it would greatly help them out in the long run. Plus, this unit's very unique, as heroes should be.

If I were you and you were me I'd have a different face.

"The only real things are imaginary..."

- Dale will not have more than these two unints. I won't remove already made units though so they will stay a mini faction of two units.

- Bard wil be an excellent archer almost compareable to Legolas =) So he will be the "sniper unit" I guess.

- A new hero that could use a crossbow sounds good =)

i wasnt offended at all. i was just a bit angry that you want to mess up with my art and you didnt let me know. getting the unused stuff is ok but if you want to change something it is good manner to let the creator know that. if you want to darken and desaurate those skins i am fine with that. i just dont want that some will add some of his pieces to my skins

I understand completely... I reacted the same way when someone PM:ed my about some skins I made. I made an incorrect assumption that models from abandoned mods was ok not only to grap, but also to alter. That was incorrect and I stand corrected.

>>> Please also let me know where you stand on the other units of BFME+ too, since I've listed some Gondor units as well. In case you don't want me to mess with the skins, we can just make other ones, np! =)

First time posting so just let me say what a great mod this is. It really does make the game far much more like it should be than EA's effort, and the enjoyment factor is far greater. One suggestion I would make for the dwarves is to swap the guardians and berserkers models around. Just seems to me the guardians look a bit more like an elite unit than the berserkers. Also, changing the mallets the berserkers use into either axes or slightly, well, more manly hammers would be good! Also, if its possible, how about giving dale back their archery range for the barracks and making yeoman archers come from farms like peasants?

I like that idea, but don't. I think the beserker skin is better than the guardians. More deadly looking.

Hmm, actually... I kinda like that thought. I also think the "guardians" (that I call Warriors in SEE) look a heck of a lot more buff than the Berserkers... But if we do this we need to rebind models and stuff... I'll think about it =)

Putting the Archery Range back isn't gonna happen though. We removed it for a reason

- It has an Axethrower animated into the model, and those are now in the Warrior Hall.
- It's basically a clone of the Rohan Archery Range =p

MAN...*wishes it wasn't immoral to put WC3 riflemen in with the dwarves*

I'm glad you got rid of the archery range. it didn't make any sense, and didn't even look very dwarven.

For the beserkers, if it wasn't too hard I'd say give em dual swords. A dwarf is deadly with a sword, and besides, why should every dwarven unit tote around an axe/hammer?

If I were you and you were me I'd have a different face.

"The only real things are imaginary..."
Back to Erebor faction