Thanks to MigEater and Gamemate I've just fixed some tiling terrain problems I was having.
When I was checking it ingame it occurred to me I've not actually posted any proper screenshots for a fair while, and I'm not sure if I've posted any full screen ones of BR3 at all.

I don't think I've shown the new sidebar either. There's a couple of niggles to be worked out - like the button at the top and recutting it for the Soviets), but the bulk of it is done (as you can see).

I've also decided to go back to this terrain (done in PSP) rather than trying to do it in 3d. I never did manage to get it to look how I wanted it to and if I'd spent that time working on the PSP edited terrain I would have finished by now.
Real RA buffs can probably spot that there are locations on the Naval Conquests map that need cliffs and don't have them - that's because I haven't done cliffs yet

Sorry there's not alot going on in them but until I do damage frames and renormalise the voxels there's nothing new to show on the building/unit front.

These are full 1024x768 .png files so I've thumbnailed them and linked to the full size versions. 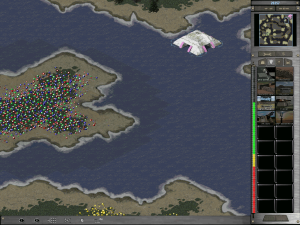 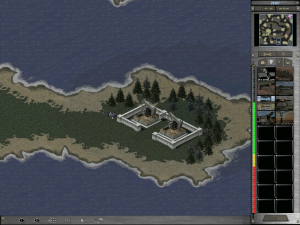 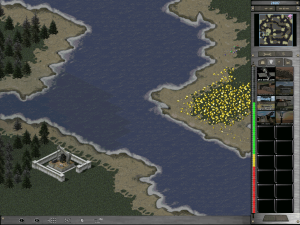 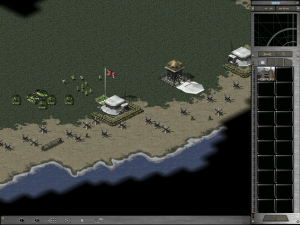 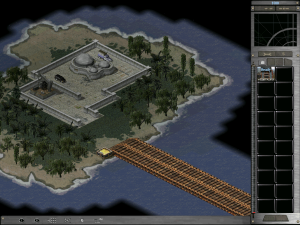 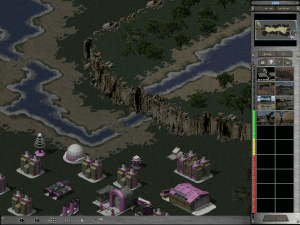 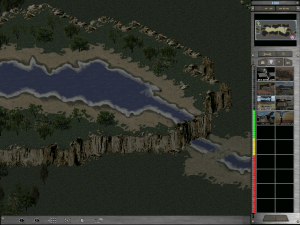 Very cool, especially that Technology Center, I always loved those buildings. I have three points I want to mention though.

-I dislike the water, it looks as if it is in the wrong palette rather than purposely made like that (Which I guess it is considering you probably have a new one to cover the new grass). The shores also have darker water than the actual water tiles.

-You should probably remove the empty cameo shines since RA cameos didn't have the same effect.

-Your walls have small black lines between each segment and it doesn't look good like that. Though they are nice walls.

-I dislike the water, it looks as if it is in the wrong palette rather than purposely made like that (Which I guess it is considering you probably have a new one to cover the new grass). The shores also have darker water than the actual water tiles.

Fair enough, might play with the colour.
They aren't darker, I just have a thing for putting negative lighting in tree areas and the negative light spills onto the shores

-You should probably remove the empty cameo shines since RA cameos didn't have the same effect.

Good point, I'll get right on that.

-Your walls have small black lines between each segment and it doesn't look good like that. Though they are nice walls.

This was intentional, so it looks like they're made up of blocks (which makes more sense than one solid concrete line). Off the top of my head RA has something similar, but I'm not 100% on that at the moment.

Have you thought about using the original RA1 textures for the beach & sea?

Yeh, I did try that ages ago and it didn't work very well as I was trying to stick to the original isotem.pal.

Might switch the water to that but I'll probably leave the beach as is.

Not really looked into it yet, but I think darkening the gems and recolouring the ore will make it look less out of place.

If I remake them I'm going to have to remodel them and it'll end up looking poor.

Very sexy, Daz. Keep it up

It reminds me gloomy feeling of soldiers in Normandy.

Updated the first post with some new ones from another map.

Been working on the grass cliffs, waterfalls and fixing some alignment problems with the shore tiles (still in progress).

you guys continue to blow me away with this mod

Another step forward. Again you've come along way from your beta.

Well it's actually still beta, but I know what you mean

Them!? That name sounds familiar somehow...

Man I can't wait until the next public beta!!!

Them!? That name sounds familiar somehow...

Precisely.
Supposedly that's what inspired the ant campaign in Counterstrike (hence "They Came from Red Alert!" on the little video).

but on the FMV, it says It came from Red Alert

Actually that's true, I'm getting confused with the name of my own bloody mod...


Anyway, that's supposedly where the inspiration came from