20 replies to this topic

Well, another week and another update.

1) First I spent a couple of hours throwing some sort of video together for the mod. Sometime in the future I'll spend more time thoroughly going through and doing a trailer, but until then sit back and enjoy:

Credits for eveything seen can be referenced in my credits topic.

(The video was all captured during actual gameplay, with no scripted maps outside of the normal campaign. This is gameplay you can expect. It was Ultra High for the most part captured at 1024x768, so that added lag. When I was not capturing full quality video the lag was unnoticable. And sometime I'll fix the one annoying transition. Just did not want to sit around for a couple of hours for it to render again in premiere.)

2) Next up - elven siege units, the Nolëdhel. In a quest to try to remove all but the logical duplicate units/heroes, the ents are being removed from the Elven faction. The beta testers have seen these units in the mod, though I have not added their powers.

So what are the Nolëdhel? They are not canonical, but they are Elven loremasters that have knowlegde of the three elements of the Elven Rings - Fire, Water, Wind/Air. There are a lot of intricacies to the unit, but I'll give a general idea of how they function. From their altar you can purchase single units, either of water, wind, or fire. As a single unit they have powers in their elements to affect structure to tear them down to return the land to a natural state or repair the naturalistic structures.

They are weak to melee attacks, and can be countered quite easily by cavalry and other units. Each element has 2 powers that they can use, but one unit can also combine with another unit of a different element. When combined this also unlocks 1-2 powers that combine the elements. For example, combine wind and water to create a tidal wave, or fire and water to create a mist to hid units in. Again, combine all three elements together to combine for more abilities that use all three elements.

So that in general is a basic overview of some of the functionality of the units. I'll be doing a lot of fx programming shortly for all the combinations of powers, but it should give you an idea. If anyone wishes to help out with some of the FX I would not mind 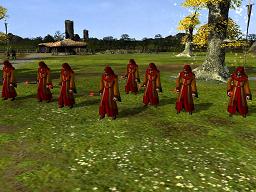 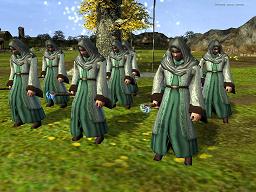 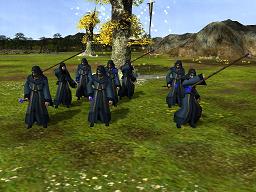 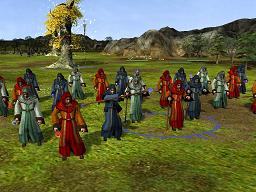 Credits - Megilaglar and Yoda Warrior for help in concept design, Edain-mod for the basis of the design of the unit (Water unit)

3) More Screens! Here are some screenshots taken by Shikari from Helm's Deep: 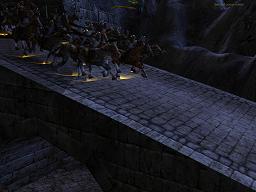 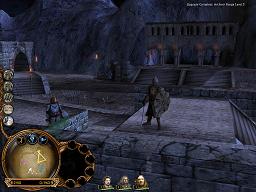 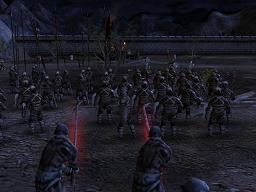 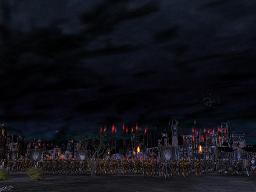 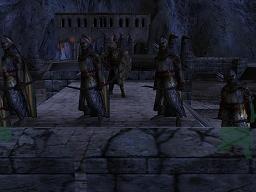 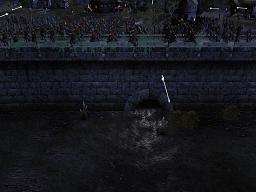 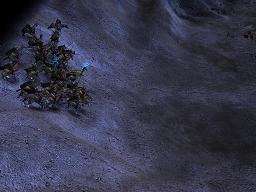 4) Capture flags for inns. Everyone finally has their own flag. So here are the three new ones, though under horrible lighting: 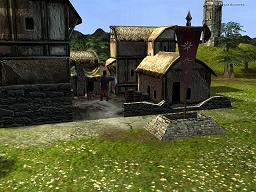 Men of the East 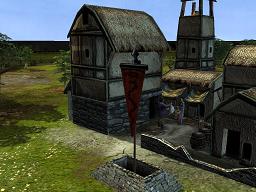 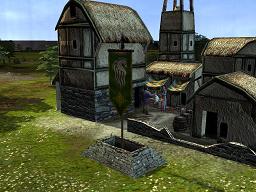 Last note, 1.05.04 was released this week to the test team. They have all been a great help in chasing down all the bugs, finding things faster than I can fix

but I'm going through and getting as many bugs out as I can. I'm not sure how much longer until the next public release quite yet. The goal is to get all of EvilMen/Arnor in game for that, which includes a lot of FX/power/ability coding which I'll be doing soon. Some of the changes in 1.05.04:

- Bug fixes from the bug report topic
- Arnor Elves completely re-done with four units, an elven captain, and a new structure.
- Arnor Ranger Cavalry added.
- Elven Lore Masters aadded (to eventually replace Ents for the elves) They are single units that can combine together up to three units.
- More scaling done for units (Ents, Mumakil, summon dragon, etc)
- More Ent units
- Added range/vision bonus etc. to walls
- Adjust height bonus for all units
- Have fun killing fellbeasts as well as the eagles
- Adjusted some heroes (Legolas, Eomer, etc. power levels)
- Added corsair ballista.
- Among some balance changes, Cavalry again is now a definite counter to catapults, trebs, ballista same as BFME1
- Evil Men use the Rhun Castle as the Fortress
- Evil Men do not crash the game when the AI controls them. There is no AI yet, but the game will not crash
- Fixed buildings on RJ maps, all buildings should follow rules
- and more

Well, I hope you enjoyed this week's update,
Robert J.

looks wonderfull. i absolutly love it

Me likes the video!! And the rest, eyecandy, great job!!!

"To follow, without halt, one aim: There's the secret of success." - Anna Pavlova.

(Yay! I was recognized!)

Really looks awesome. Perhaps I should get RotWK afterall

"An expert is a man who has made all the mistakes which can be made in a very narrow field." - Niels Bohr

if you are desperate for some fx add my msn saltybarnicle@hotmail.com and give me details and ill see what i can do-id be glad to help an awesome mod

Video is simply incredible, and I am looking forward very much to the next public release. I only regret that my comp's so crappy I can't see that level of detail in the actual game...

They aren't completely removed. They are just with Rohan only. Part of the reason for the mod is to return to BFME1, and Ents and Rohan are a part of that. I did not want 2 factions with the ents, so I chose to remove them from the Elves.

Oh scared me there XD

Aye, one of the things Rob wants to do with the mod is to remove the 'clone factions'. In BfME1 every faction was unique in it's own way. BfME2 changed that, every faction had every other faction's unit only using a different model and name. So, Rob hopes to offer more unique factions - hence 'return to BfME1' - so he decided to remove ents from Elves. And he replaced them well, since the Noledhel are simply very original and unique.

Lord of the Rings Junkie

Lord of the Rings Junkie

May I ask what graphic detail level you used and frame rate to capture that? I wish there were a 640 x 480 mode for the game, recording 800 x 600 at medium quality and 10 FPS makes the game lag really badly with RJ cam. (Speaking of SEE here.) Also, what capture program do you use? Sorry for the OT and late reply.

Don't come between The Lord of the Rings and its junkie!

I actually captured most of the video except Moria at Ultra High at 1024x768. I just shrunk it down for the video.

As for the program I used - FRAPS. And you can play the game at 640x480 if you really want to, or you can capture it at 50% size or whatever you wish.

As for the custom screen resolutions, go to your options.ini file in the your application data file.

And I thought I'd mention something. I skipped an update for a week, not because of lack of items - far from it - but more due to a crazy week with the fires nearby and other items. I'm planning on still doing an update this week.

Excellent! Good another new update too.

Some absolutely brilliant progress! I can't wait to the next public version..