Guess who has been busy?


32 replies to this topic

Ah so much has been going on where do I start! Well I guess the biggest news would be that I've successfully added the Post-war timeframe to the beta. I was worried about possible problems with the AI but it seams to be able to handle multiple unit lists with out any problem (the AI isn't building late-war units post-war etc).

I finally finished the Axis sidebar, I started on it back in June XD but better late then never I guess. I'm planning to have Japan as a separate side from the Axis (like the Soviets are from the Allies) but that’s dependent on the whole NP/RP2 situation. So I don’t know if I'll add some jap stuff to the Axis one or if I'll get to make a funky sidebar just for them (I’m thinking something with bamboo

I spent the last few days playing around with debris, particles & fire anims. First off I got rid of the RA2 ones & converted the anims from TS, plus some new smoke thanks to Gamemate. Large debris will now fracture into smaller parts upon impact & also leave small fires behind, they wont crater the ground anymore too. Explosive weapons will leave larger fires behind with there own smoke. Fire anims will now also damage any thing near them, this even means buildings at half health so if you don't fix any damage to them quickly they will burn down! (makes a change from auto-heal)

Because of all the new flame & smoke anims I've made use of the Detail Level feature in the options menu (which AFAIK doesn’t do anything normally). With this you can set the detail level to low & disable all the fancy Gfx & debris, thus making the game run faster. Which is really helpful if you want to play Vs 7 AIs or online etc.

Lastly I've been working on the Italians (see pics), I haven't made any individual pics of the new units yet but I'll post them on the site in a few days.

Germany with their new sidebar 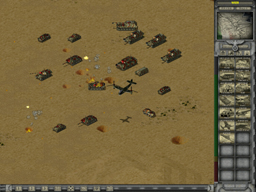 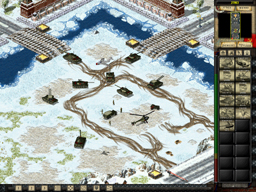 A new challenger enters the arena! 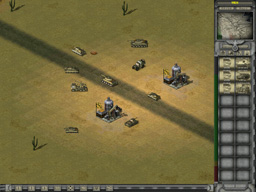 So are you finally, even slightly, happy with the current status of the mod?

Yer I’m happy, I’ve got a pretty good foundation now so all I basically have to do is finish making all the units & I'm done XD

will the bridge be changed? like a pantoon or smthg?

Yer I’m happy, I’ve got a pretty good foundation now so all I basically have to do is finish making all the units & I'm done XD

I was talking about the beta XD

@ secret
When it's done.
PS. Stop spamming the thread with irrelevant stuff

all posts my stupid spamming things deleted
please excuse me

The Axis sidebar is magnificent.

The debries system, the way you implemented it, is going to be awesome. But in the first screenshot, I see some small errors (two of the crates are cut). Are they fixed now?

The infantry in that Soviet screenshot - pretty damn nice. Who made them?

All in all, the mod is shaping up extreamly impressive and I can not wait for the public beta.

The debries system, the way you implemented it, is going to be awesome.


I’ve done some more work on the debris system & now have custom voxel debris with chunks of the tanks coming off etc. The addition of tank wreaks is still a strong possibility too, I’ll just need to find the time to make a thousand(ish) shp files. I’ll probably implement the “scrap metal” system next, for those who don’t know it’s where destroyed tanks leave behind scrap metal that can be collected for money.

two of the crates are cut

That crater is bigger then it’s foundation so I need to resize it a bit, no biggy tho.

The infantry in that Soviet screenshot - pretty damn nice. Who made them?

The infantry where ripped from the game blitzkrieg by T34 Sam. He only did a few tho, I’ll have to rip some more of find someone to make some for me soon.

If RP2/NPatch allow the use of husks, like in C+C3, will you add that too? It'd be very awesome to get a team of technicians go and get some German wrecked up tanks bak into the fight.

Also, just noticed your title. 'Holy Crap' came to mind first and for some reason refuses to go away.

Everywhere I've looked this week I've been surrounded by Italians!
Is the MI-1 new too, or do I just not remember it? (soo many units, so little memory

)
That sidebar is incredible, I'm hoping you will be able to use a Japanese one just so I can see it

I made the Mi-1 months ago

I still haven't got round to doing them Italians pics >.< I'll try to have then done by tomorrow.

i like the one to take back moscow,i always wanted to play that map.
and for the rest,so soon italian ones

,lol u're proccess of the mod is great

Will there be upcoming...treats this holiday

Happy Thanksgiving - all the yankees

Merry Christmass AND Happy New Year IN ADVANCE guys.....have pleasant holiday to you all!!

Getting ahead of you’re self a bit, the images weren’t needed either.

hi guys,as fan of ww2 rts i'm more than impressed about your ideas and work. i found out about this mod 2 days ago and since i've been looking evrey hour to see if someone posted a release date. I'm a great fan of german and especially soviet tanks (

allied tanks were rolling tin cans). I also admired the technology developed during the war that made possible so many wonder weapons... and then you conquer berlin, hitler is dead and the game is over, but not in this mod

I can't wait to see how the IS 7, a jewel of soviet design and egineering for it's time, smashes the competition to burning pieces. I'm not sure if i should post this here, but i'm desprate...

You wont see a release date yet. Maybe soon you will see it, as for now just wait and sooner or later you will see a realase date.

Just keep checking for updates/progress of this mod.