17 replies to this topic

1) First thing I'd like to do is give a great "THANK YOU!" to everyone who has helped this mod along. We just crossed the 5000(!) download mark at lordoftherings.filefront.com, and I could not have asked for anything more in the response to the mod so far. Thank you to the Beta team, all of the those who've contributed, to T3A for hosting RJ, and to all of you who have played the mod. This has just been a great experience creating this mod.

Searching across the web I've also found another site that has uploaded my mod. I did not even know this was up, but here is another mirror:
Strategy Informer

Another mirror can be found on a french site here:
http://www.jeuxvideo...rotwk-10506.php

Also, lordoftherings.filefront.com if you did not know has been holding polls for BFME mods. While they are not comprehensive as they miss, in my opinion, some of the best mod releases of the year, it's a great place to support a number of mods on The 3rd Age - TEA, SEE, WotE, RJ, and other affiliates like BoG. Also, post comments for mods that you think might have been left out so they can be added to the mod center if they are not already.

2) Well, one thing that seems to be done over an over, including in RJ, is a re-working of the dwarven skins. Shikari has really developed his talents from art to skinning and I'm proud to show of his new dwarven skins. These skins bring all of the dwarven units a little better in an overall scheme. I still need to adjust the coding so they have their own upgraded randomized textures, but here you go:

3) Lorien Warrior/Archer Skins, Nazgul Skins, & Arnor Heavy Armor Skins. Here are a few of the other skins done by Shikari. The elven and arnor skins have not been randomized, but they bring a great addition to the mod:
Lorien Warriors - 1 2 3
Lorien Archers - 1 2 3
Nazgul - 1 2
Arnor HA Soldiers - 1 2

4) Arvedui is no longer a clone! The first of Arnor's hero models, credit to cahik for this great model, has been added.
Screenshots - 1 2 3

5) Lastly, as different opportunities have arisen and the mod continues to improve/expand it is quite clear that the website needed an overhaul so I've begun this process. There is still a lot of work left, but a lot of content has been added included 100s of screenshots and all of the new items:
Check it out!

Hopefully the next update will have a lot more information on what will be worked on for the next version and with the holidays over there should not be as much time in between.

As always, thank you for playing!
Robert J.

good idea not to use t3a methinks

Love the new skins...I wish I had a computer that could play at that good of detail level.

I'm not sure whether it's my computer acting up or a problem with the website, but the RJ ROTWK website that you've posted won't open. I get a message saying Internet Explorer can't open http://rjrotwk.the3rdage.net/, and that the operation is aborted. I get the same message going from my bookmarks, so it isn't the link that's bad.

Tell the truth, I don't like dwarves, but this skins looks fine!

Site doesnt work for me either. Nice update

Yeah, it's an IE7 issue that I'm working through. Hopefully I will have it resolved soon.

Arvedui looks awesome, man I want to try him out. The site works fine on FireFox. BTW, the first two Lorien Soldiers link to the same picture.

I like how the new dwarf skins are turning out.

Have they just been recolored or is there new material in them? Same goes for the elf skins.

Not sure why IE7 doesn't like the code. Just been comparing it with the RA site code, which I got working in IE7, there is a difference in the actually script code:

You could try changing it. If that doesn't work, try moving the line above the <p> tag so it is the first thing in <body>.

Thank you. I'll check it out when I get a chance. I mostly try to stay on IE6 for work reasons, but I have one comp with IE7 I'll be working on over the week-end. Hopefully then everyone will be able to see the site with no errors.

As for the skins - they are more than re-coloring. Some of it is just re-coloring but a lot of it is new/changes made. I'll try to place some low-res versions of the skins up to compare them.

I fixed the error on the website so there will be no problems. I still need to completely update the faction area and a couple others, but a LOT of content has been added. Check out the locations of Middle-Earth in the Media section to really get a feel for what this mod is about.

Also, here is a small preview of the dwarven skins. As you can see Shikari has done some really good work on putting these together, doing a bunch from scratch. The elven units are along the same lines. they actually also look like they have armor when upgraded. 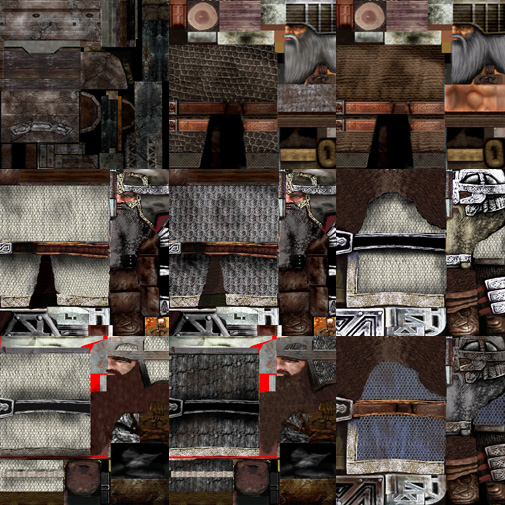 You guys have outdone yourselves once again. I always hated the look of the Elves, they were too colorful and didn't feel real. Your skins for them are superb and will make playing as them alot more fun. The Dwarven skins are amazing also, finally they look as they should have looked from the beginning. They look great, well done in this area. The Nazgul skins are good, hard to spot the big differences from the previous versions.

Everything looks great, cannot wait for the next release of this mod...seriously i can't wait! lol

scratch that! the downloads are up to 6667! awesome!

What you see here can't be downloaded. The latest version released is 1.05.06. Rob is planning on getting a lot more work done before releasing another public version. It could be a few months (or more even) before a new (public) release.