I have great news for RJ-RotWK this week. I finally got my copies of the German mags PC Games and PC Action, both of which did small write-ups for the mod and the mod is also available on the PC Games cover dvd. To view the write-up check them out below: 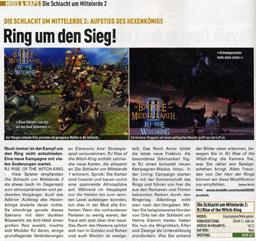 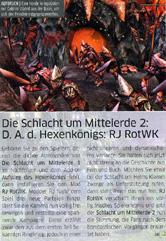 Allathar has been gracious enough to translate both items.

PC Action:
"The War of the Ring isn’t over yet. A new campaign with many changes is waiting.
RJ Rise of the Witch-King
Many players felt The Battle for Middle-Earth lacked in atmosphere compared to it’s prequel. The expansion Rise of the Witch-King didn’t change that. The straight scenario with the journey of the Dark anti-hero (the Witch-King), made modder RJ decide to make big changes in EA’s strategy-game. RJ Rise of the Wtich-King brings exciting new campaigns, which remind of the Battle for Middle-Earth 1. The campaigns are linear which build up some good atmosphere. Where in the base-game only heroes could reach the tenth level, in this mod all units can reach it. If you thought there weren’t enough factions in the game, enjoy the three new ones. The Men of the West are splitted into Rohan and Gondor, and also Mordor is made into two factions. The faction of Arnor brings the last new faction. As special item RJ added a new campaign-modus. In the Living Campaign you start with the Fellowship and move them through familiar locations from the books and movies. However, now you have the option in example Helm’s Deep to defeat the orcs at with Elven or Dwarves reinforcements. As you can see in the screenshots, you move the camera in RJ-RotWK freely, which adds much to the gameplay. I recommend all fans of the Lord of the Rings to play this mod!

The Battle for Middle-Earth 2: RJ Rise of the Witch-King
Game: BfME2+expansion
Rating: Excellent"

Thank you to all who have contributed to the mod and it's great to see it across other mediums. Everything is overwhelmingly appreciated. So often lately I've gotten pms/e-mails from all over the world on how RJ is being user from single-player, on-line, and especially LAN parties. Thank you to everyone.

Also, I've transfered some topics out of the Beta forum so everyone can see some of the developments for RJ, including screenshots of the Lothlorien fortress and it's expansions:

As always thank you for playing
Robert J.

Wow pretty incredible... It is nice that you get those credits because you more than deserve it. I'm goin to keep an eye after rj rotwk in the swedish game magazines.....you never know.

Yes, that...irrated me that they used the moddb entry instead of T3A and my web-site. This one they approached me on including them in the magazine so I think they might have seen it from my moddb news release, but hopefully if it ever happens again I'll make sure they reference my T3A site.

I never thought we would get this far... strange how popular a mod can get...

Its always exciting to see mods from the internet advertised on a different medium!

He who bears skill but lacks effort, makes himself inferior to those who have no skill but try nonetheless.

"There is some good in this world, and its worth fighting for!"
J.M.J.

I need the new patch.. when you will publish it?
I cannot wait!! I WANT my Precious Treasure.