Detail - 14 / 20
Could of done a lot more with detailing otherwise fine. Some of the detail I did like because it was not too over the top and more realistically placed, Cliffs where a bit too repetitive and they kept the same shape in the majority of places. I Didn't like the way the shores where placed as they looked a little bit blocky and again, repetitive. One thing that I did not like about this map was that It was really flat, the only time the ground raised / lowered was when there where cliffs.

Lighting - 10 / 20
With the YR Engine there is not much you can do with lighting but MadHQ did a fine job with giving the map a good feel. The general lighting I liked cause it was not really any surreal colors (which I dislike in YR) but a simple afternoon type feel to it. No lighting on the ore or water which was a let down on MadHQ's Lighting score. Overall the General lighting was good but invisible light posts around the ore etc. would've gave it that extra nice feel. Ten points for General Lighting and Ten points for light post usage, unfortunately MadHQ got a zero on the light posts due-to the fact there was none.

Layout - 14 / 20
I Personally am not to fond of symmetrical layouts. This map was somewhat symmetrical in a tournament map style layout (2 vs 2), the layout was Ideal for team battles. I Liked the variety of choke points in the map too making it that extra bit hard to defend against the enemy players. One problem was that the ore being separated in two groups, one patch of ore was much larger than the other. Layout was good, but MadHQ's score was dragged down due-to the unrealism of the layout.

Game-play - 17 / 20
Game-play was the best part of MadHQ's submission. The layout of the map calls for good game-play (especially 2 vs 2 battles). MadHQ's map is conveniently names "Harvester Problems" and for a damn good reason, there is no ore right next to your base and it's located in the middle in two parts separated from each other by a small lake. Due-to the position of the ore / gems you have to fight for it and defend it once you've got to it first making this map difficult in online games. Excellent work here.

Triggers - 16 / 20
Triggers consisted of many sound effects which is always good to give any YR map a good feeling to it. Bird sounds, shore sounds etc. Another trigger that caught my eye was a few bonus ones like a map extension trigger and a map reshroud which where a fantastic addition to the map, though the delay was extremely long, I had to test to see if these triggers actually worked (They do). MadHQ could've added more, maybe some misc. things just to make the map that extra bit better. Overall on the triggers a good Job, MadHQ.

Aro's Personal Comments: I Did enjoy playing this, It was quite a good map to play on and I would deffinately reccomend it for online games, though as I said above I'm not too fond of symmetrical maps and unrealistic maps, but MadHQ did a damn good job on this one to make it fun.

Detail - 15 / 20
One thing that kept bothering me was how flat and repeatitive it was. Detailing was ok, although there could have been more. (few more trees here and there, couple mixed up tiles, etc.) Again the flatness was bothering me, I felt it was too repetitious. Although it was still good.

Lighting - 10 / 20
Lighting was ok. Although there isn't much you can do about lighting in this blasted YR engine, I felt there could have been more ligthing effects.

Layout - 17 / 20
The chokepoints and location of the of the ore was awesome. I really enjoyed that a lot. I do enjoy occasional tournament style battle maps, so this was a pretty fun map to play on. Plenty of action going on at the ore locations.

Game-play - 17 / 20
Game-play was the best. I really enjoyed playing on this map. It was fun and very enjoyable. Kept me on my toes.

Triggers - 15 / 20
I think triggers were mostly sounds. Which was nice, but not too many triggers.

Joshy's Personal Comments: Awesome map! Really enjoyed playing it. I recommend this for an online game. All in all it was very fun to play on.

Detail - 13/20
Detailing was nice. I thought there was plenty of trees. My biggest concern detailing wise would be the lack of hills and the fact that all the cliff ramp slopes were just straight. If you would have added some 'hillyness' to it then your score would have been raised a little. Overall the detailing in general was repetitive I thought namely cliff placement and such.

Lighting - 10/20
Overall lighting was pretty good I thought. However, the lack of invisible posts to give a lighting variance was a dissappointment to me. I know it is hard to make good lighting on YR but a little variance would have been nice. For example some blue lighting around the water.

Layout - 12/20
A nice 2vs2 tournament style layout. Several choke points to use to your advantage. I noticed that the bottom side of the map is more narrow thus choking is easier in general but since the ore placement was on the cliffs on these areas the bottom seemed to lack the amount of ore the top had. It was a general symmetrical like tournament map which usually keeps them balanced but aren't that great for eye candy. I also felt that this map could have used a back route into each base.
Also watch out for those back facing cliff ramps. You have 2 of those kinds errors. Contact me once you see this if you haven't found them.

Game-play - 17/20
Game-play was pretty good. 2v2 with all brutal AIs was quite fun though nothing spectacular. I think that my comment about the back routes to the base areas in the layout section would have possibly given more difficulty and increased this score with the layout.

Triggers - 13/20
It appeared that most of the triggers were sound trigger which I am afraid I didn't hear much of. Though the map expansion was something I liked. It worked 100% and seemed to go nicely. My only thing about that is that it just kinda happened...there wasn't anything to let the player know that it happened except the radar map getting slightly more wide. Other than that good job!

Ixith's Personal Comments: A Great 2v2 style map and would be very fun online. Great job on it! It was fun and better than several of the maps I have played before. Online match anyone? 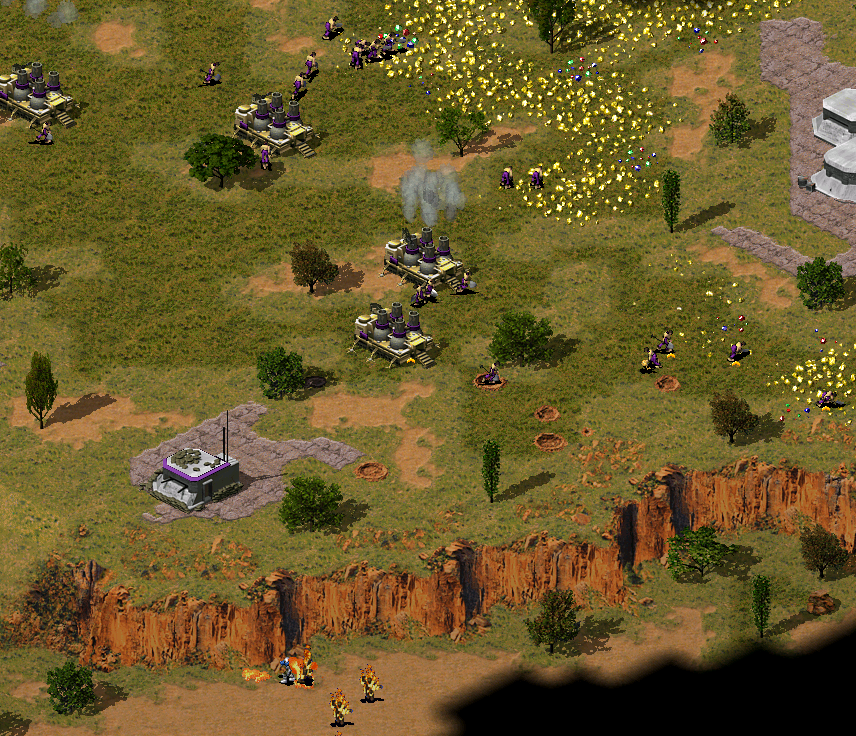