The 155mm heavy gun, nicknamed "Long Tom" could fire a 43.09 kg projectile upwards of 23211 mt with high accuracy. The gun is so long that if the trunion, which effects the raising and lowering of the rifle, were put at the center of balance, the breech of the gun would go into the ground whenever the muzzle was raised high. The solution is to put the trunion farther back, and to make the gun easy to raise and lower by hand by substituting mechanical balance for natural balance. The equilibrator does the mechanical balancing. In 1940 a modernization program was started with over 3,000 guns. They received a new carriage with pneumatic tires, and were redisignated 155mm gun, M2. The M2 was the backbone of heavy artillery in World War II.

Specifications for an advanced field gun intended to replace the 6-Inch Mark XIX guns and the 6-Inch 26cwt Mark I howitzers were issued in January of 1939. It took more than three years before the first examples reached the units in May of 1942. First, the engineers overdid it, by adding a series of gadgets that proved useless or counterproductive and had to be removed later. After that, the production was slow to start.
Its first battlefield was the Western Desert in the second half of 1942. Firing powerful ammunitions, the new weapon was well-liked, despite its limited range. A spate of accidents in Italy, due to its conditions of use, tarnished temporarily its reputation in 1943-44. The cause and the solution having been found, it became the most popular British Field guns during the campaign on the continent. As soon as 1943, lighter ammunitions (down from 100 lbs to 80 lbs) had corrected its range problem.

The 203-mm howitzer M1931 (B-4) has a relatively short tube, only 25 calibers long. It has a hydraulic recoil buffer, a hydropneumatic recuperator, and a screw-type breechblock, and fires bag-type, variable-charge, separate-loading ammunition. Early models were mounted on a full-track (but not self-propelled) carriage in firing position and for short moves. For longer moves, the tube was removed and transported on a separate four-wheeled tube transporter.

Although that gun wore down its barrel at an accelerated rate, it was for the rest an good weapon with high performances. Introduced in 1941 and fitted on a mortar carriage, it replaced the 150mm as the backbone of the German heavy artillery

During the late 1930s, the Italian Army decided to replace the bulk of their heavy artillery park that by that time resembled an oversize military museum with all the World War I pieces. The army selected two good and thoroughly modern designs, one a gun with a caliber of 149mm and a howitzer with a caliber of 210mm. An Italian Army team designed the 210mm howitzer, but Ansaldo produced the howitzer. The howitzer was known as the Obice da 210/22 modello 35. Although shown in prototype form in 1935, it was not accepted for service until 1938 when a production order for no less than 346 was placed. The modello 35 was a very sound and modern design. It used a split trail carriage with two road wheels on each side. When the howitzer went into action these wheels were raised off the ground and the weight was assumed by a firing platform under the main axle. The entire weapon could then be traversed 360 degrees once the stakes that anchored the trail spades to the ground had been raised. In service the modello 35 was successful enough. It could be transported in two loads, but for prolonged moves it could be broken down further into four loads with extra loads for assembly equipment and accessories. The modello 35 attracted the attention of the Germans and, when the Italians surrendered in 1943, Ansaldo was forced to continue production of the modello 35 for the German units in Italy and in German service was known as the 21-cm Haubitze 532(i) and was still in action when the war ended. 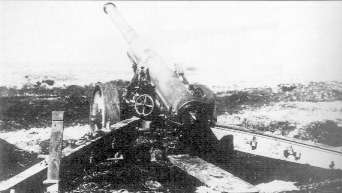 Type 89 was the main gun of the IJA heavy artillery units. It was widely used from the Manchurian Incident to the end of WWII, for example, Nomonhan, Bataan and Corregidor Island, Okinawa.

Changed the Type 4 with the Type 96

added (where possible) the "lenght of the carriage" data

Yep & what's even better is that I just finished making it