can't wait to play it

Master strategist, if the troop numbers are right...

I agree, nicely done! I can't wait to play this, although i haven't really been following it, because i haven't heard much, but now it looks amazing (Although i sware somewhere i head this wasn't going to be released publicly...)

A master strategist, such as Zhuge Liang, will be remembered not for his intellect, but for his common sense.

But will there be some maps with it?

Yep, it will be released publically. What you are probably remembering is a comment I made awhile ago that there would be no public beta for the mod. But the final product will definately be public

For your viewing pleasure today are two screens that I took of a new snow map that I've made for the mod. Based off the EA Wold map: 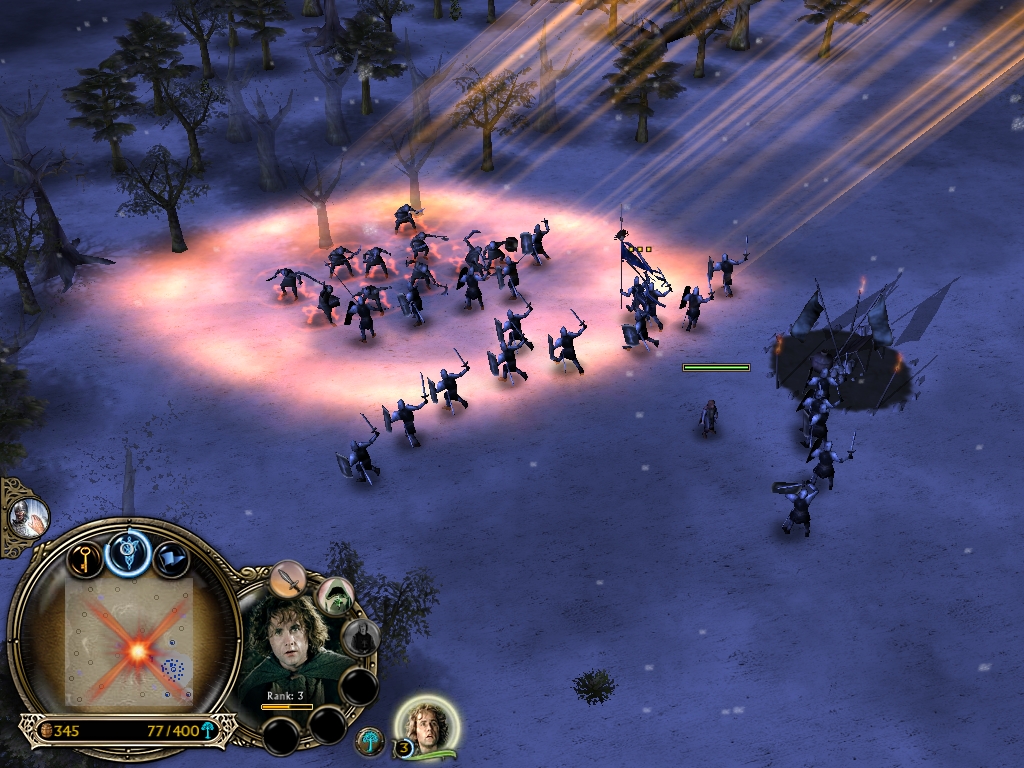 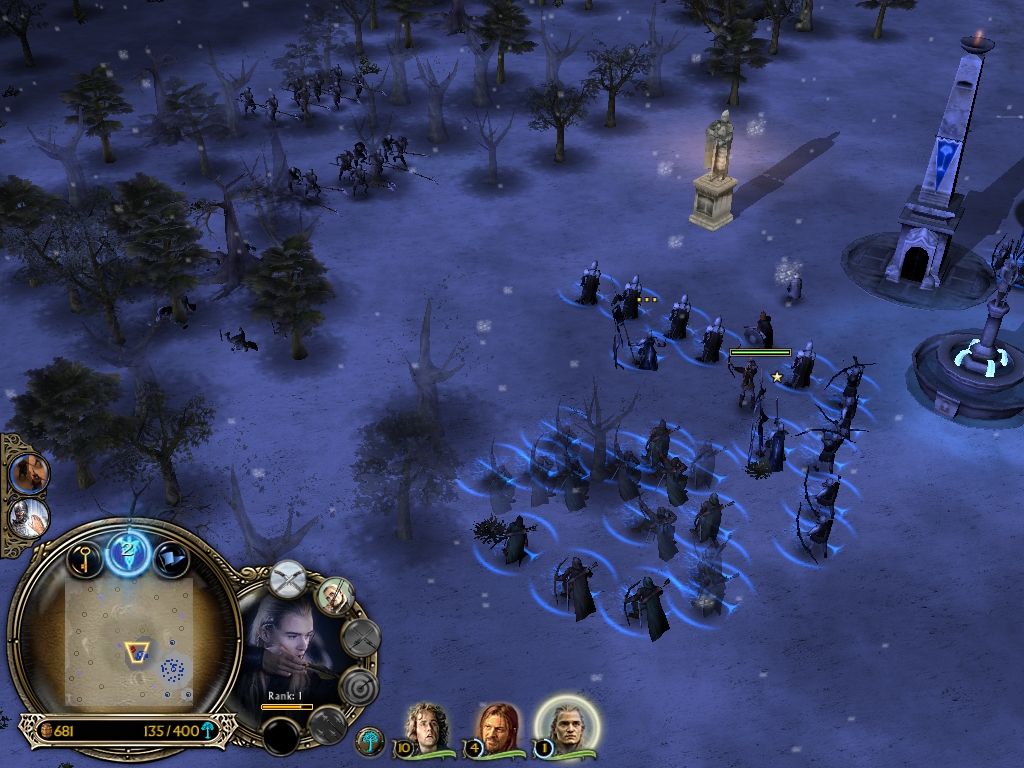 The falling snow is awesome and doesn't seem to create any problems with lag. This may not be the final version of the map (lighting may be increased as it is a little dark currently) but it gives you a general idea of the map.

Btw, anybody know how to make these screens into smaller thumbnails using just the forum code? I'm uploading them to my site and then just linking to them using the [*img] tags but I'd prefer to have them in thumbnail size to save on page load time and such.

Yes there will be several new maps included in the mod. The above snow map, the morgul map, and hopefully several more that some of the mod team are working on now. If balance and bugs don't tie me up, I may try my hand at making one or two more maps as well. However we won't delay the release of the mod for any maps, or at least not more than a few days

It's a nice map, what region is it based on?

Well it's basically EA's Wold map in winter, so north-east Rohan just north of Amon Hen. But I picked it because it has one of the best mixes of forrest and flat clear land so it works great for cavalry and elves/rangers and it's a big map that works for up to four players.

What happens if you use Rain or Darkness or Sun thingie on it?

Well cloud break and darkness look fine. I haven't tested it with Isengard... that could be rather odd looking. I'll check it out.

What Abilities does Witch-king have? I actually never heard of this mod.

The Witch-King's abilities are, based on whether he's on foot, horse or fellbeast are:

Here are some pictures of the isengard heros and the urk pit units.

Just to let people know, the Isengard heroes are Saruman, Lurtz, Sharku, Wormtongue and Ugluk. The bird thing you see is the Summon Crebain spell. It summons Crebain to scout, can move around the map, but can't be killed.

Actually the Witch King is a little bit different (I should probably go update the site... hmm), he only toggles between foot and horse as I couldn't make the Fell Beast part work fully (was very close but one critical part isn't fixable). And because of that his powers changed too, and they are the same for both foot and horse.

But don't worry, he is still a hugely important part of Mordor's army. He has the best/largest leadership, his mace is a really powerful weapon, and This is my Hour is one of the best hero powers in the game since it will kill all enemy heroes in a medium sized radius around him (very effective against the Aragorn/Gimli/Legolas trio). Finally he also costs less, $3000 and starts at level 10 so all his powers are available when you get him.

And to make up for the fact that the WK cannot mount a fellbeast I've given Mordor an additional Nazgul on fellbeast (totalling 3) and removed the Nazgul on foot who didn't really do anything for the player. And with all the new heroes that Mordor got too... it works out quite well

Update on the rain on the Blizzard map: it actually does a really cool effect where the snow starts falling faster and it looks and sounds like sleet or real freezing rain. Then add in the lightning and thunder and it reminded me of the scene in Fellowship where Saruman is casting his spell on the mountain and the weather starts going crazy before the rocks fall on the fellowship. Very nice effect actually

Update on AI: the AI will now use all spells (both Good and Evil sides). Lauri was able to get the good side working and I got the evil side working.

Ok, on to the good stuff. I played another game today, this time it was me (Isengard) with Hard AI Mordor against Hard AI Rohan and Hard AI Gondor. 2v2 on the Blizzard map. Long story short, the game lasted nearly 3 hours and was really tough. I was next to Mordor (ally) and Rohan (enemy) and the rohan AI was brutal. It wouldn't let me hold on to any of the camps nearby and I was struggling with resources until I finally got Saruman and used his industry power to get more resources out of my main base. All the AI's used many heroes and were very tough. Mordor and Gondor were locked into a stalemate for seemingly the whole game; neither got farther than half way towards the enemies base. My war against Rohan was more back and forth with us alternating who controlled the middle. Finally I got the Balrog as they were attacking with the Blue Wizards but one of them instantly shot the Balrog with their Istari Light and that little battle was over before it even began

However Saruman was able to kill one of them with his fireball power and then Lurtz and the surviving uruks took out the other wizard. Then I built up my force and pushed towards their castle. I finally got and held a camp nearby and built a siege works and some ladders (amazing tool now for sieges! much more arrow resistant so it lasts longer if you have swordsmen defending it). I was able to get in and destroy their citadel and half their base (upgraded uruks saved my life!) and by the time they destroyed those uruks, more came in to replace them. So I was able to kill rohan and then mordor and I teamed up on Gondor and made quick business of them.

All in all, the AI impressed me with how hard it fought. It took me 3-4 Balrog summons before I finally brought Rohan down. In fact it was the fully upgraded Uruks with the siege ladders that finally did Rohan in. If they had defended their walls like a human player would have (or if they had pressed their attack harder when they were attacking my base) they might have had a different result to the game. Their wizards, heroes, and cavalry were able to hold me off for quite some time very successfully (and I'm not a bad player either; it was skill on their part ).

Other than the occasional bugs or little balance issues, we are finding that the mod's balance is in quite good shape. I'm very happy with it at this point and am optimistic that we will be able to release the mod on time or sooner

Ok, screenshots!
Saruman with his industry power in my main base: 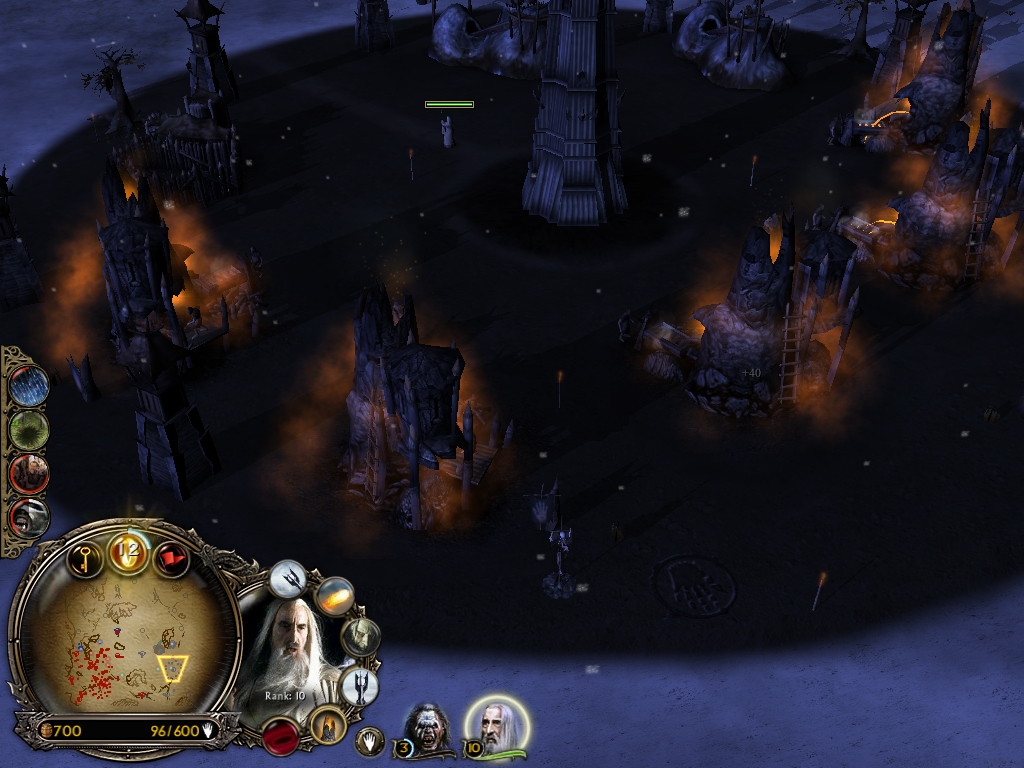 Rohan AI's Blue Wizards. Using Protection of the Valar and Orome's Wrath at the time of the shot: 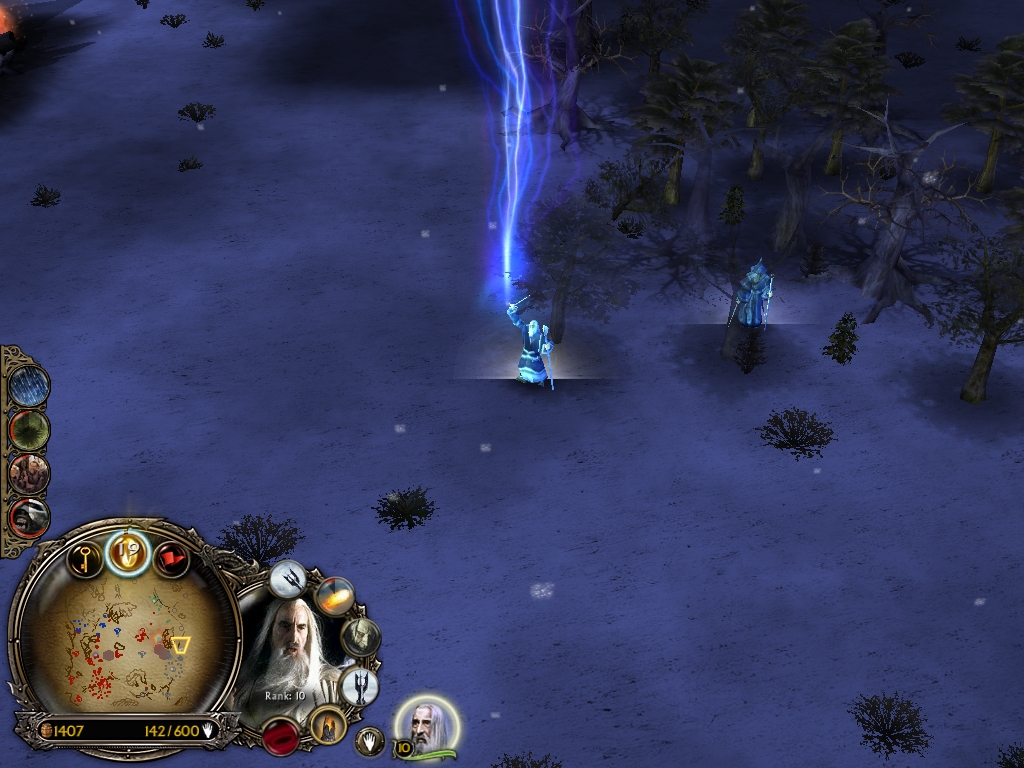 Barely even got the chance to growl before they killed him: 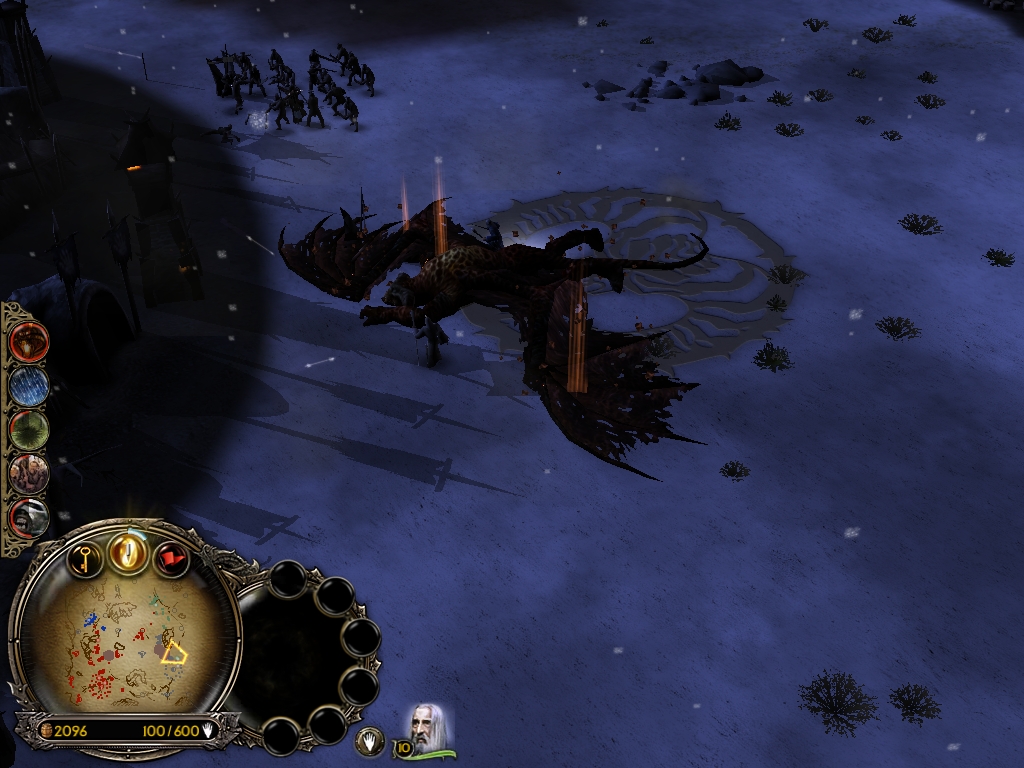 Great example of a double leadership glow. Mordor's Darkness with Saruman's leadership I believe:
(If you look at the mini map you'll see all of Mordor's troops and how far they were able to advance) 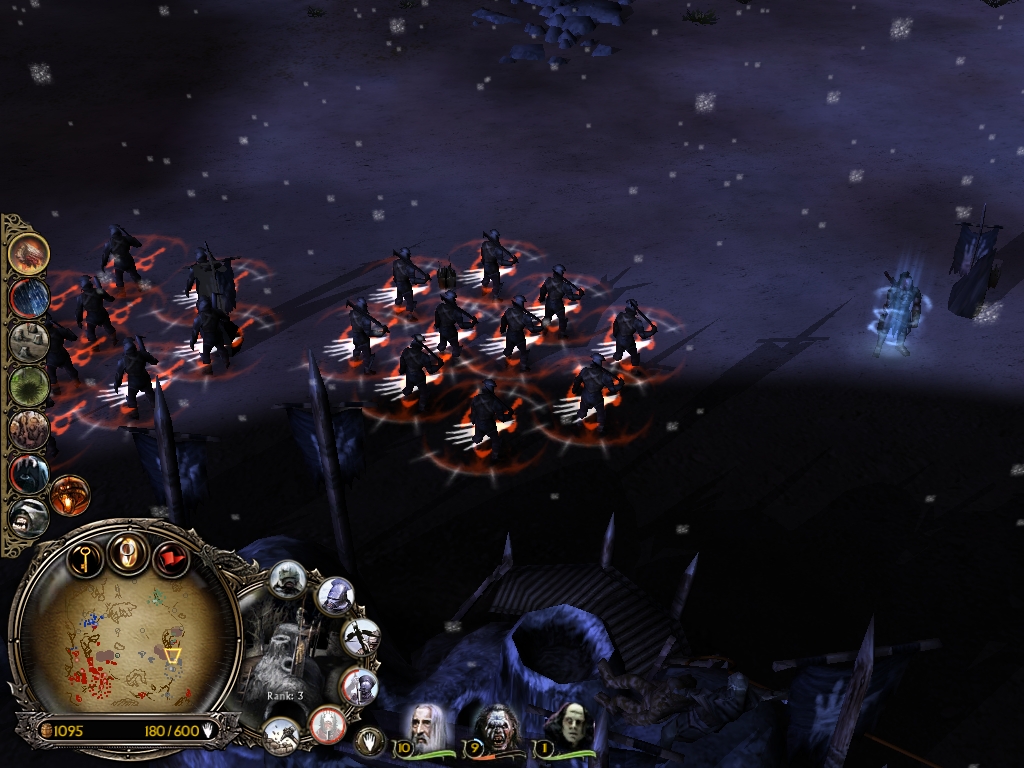 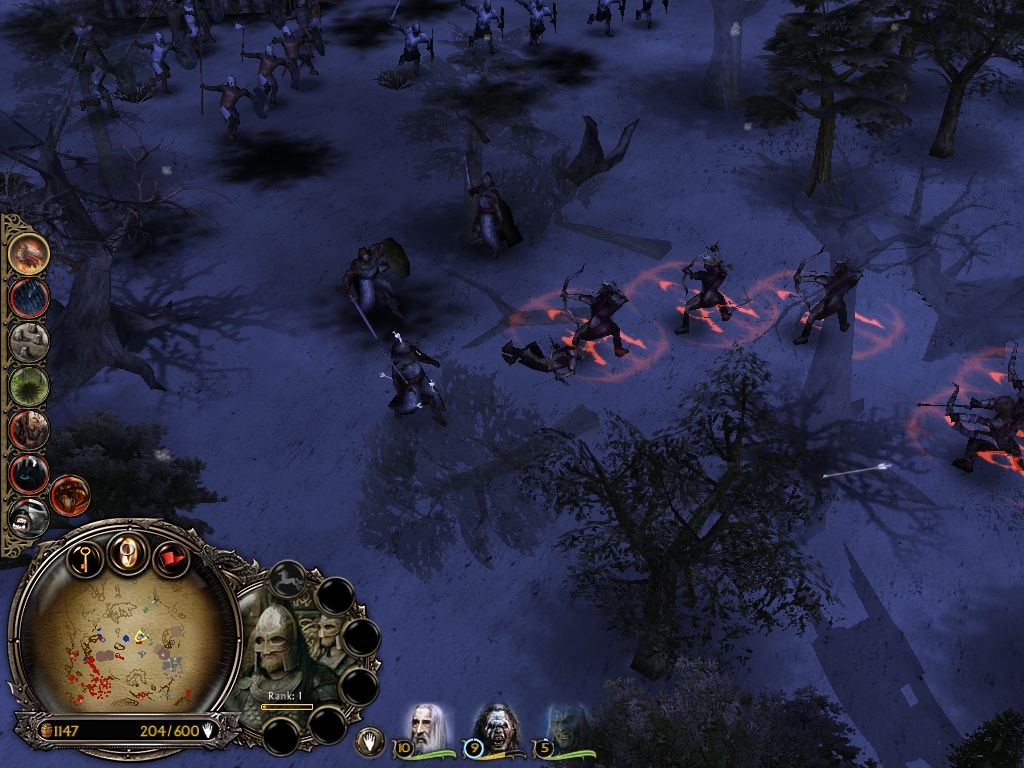 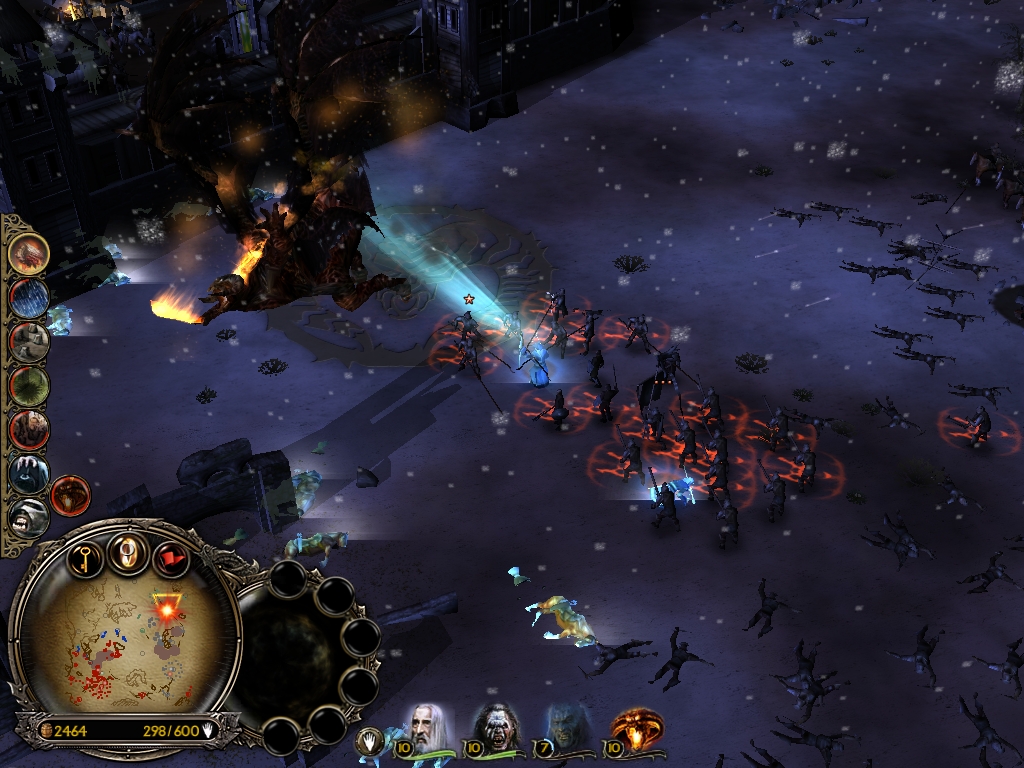 Now we are talking! Too bad I found out a moment later it had no health left. 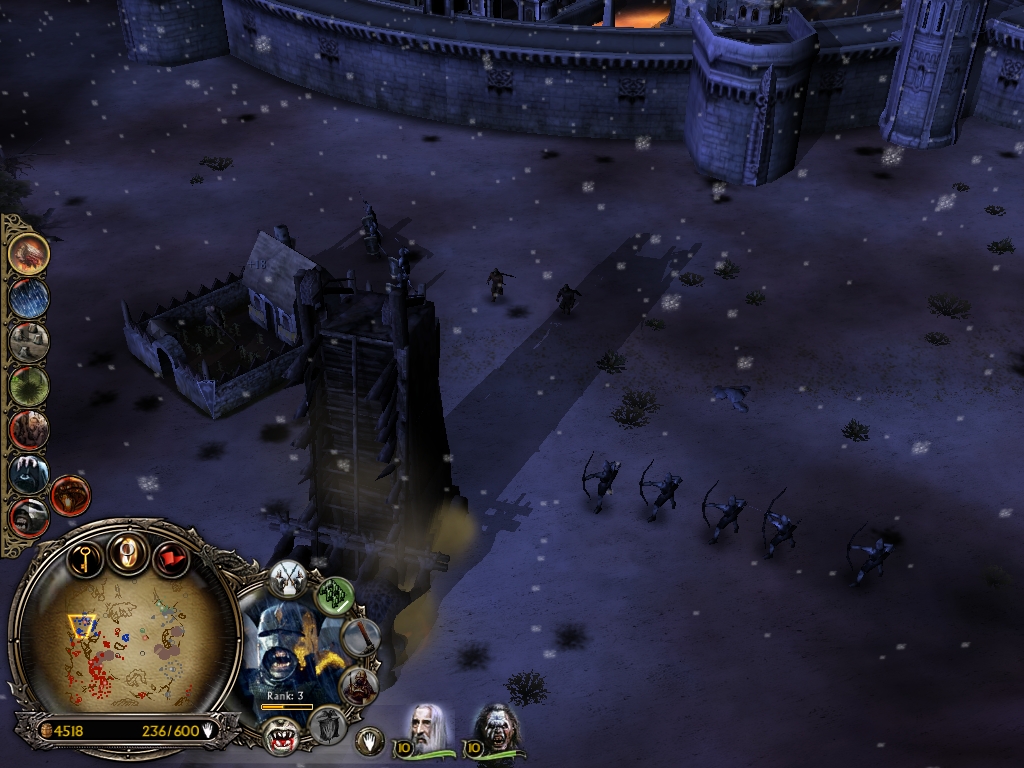 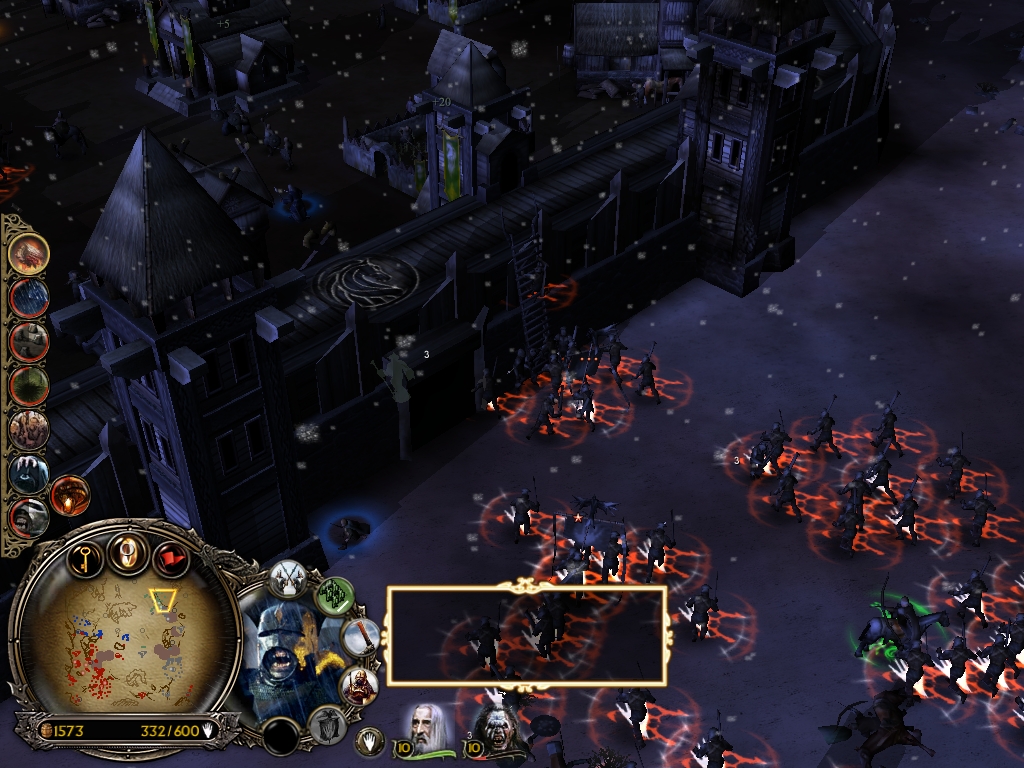 Wow screenshots look awesome! Witch-king and Saruman sound really powerful and they should be.. Gothmog I was playing the other mod you made.. My only thing about Witch-king he is way too slow when he is on the ground.. Ha his speed been increased at all?