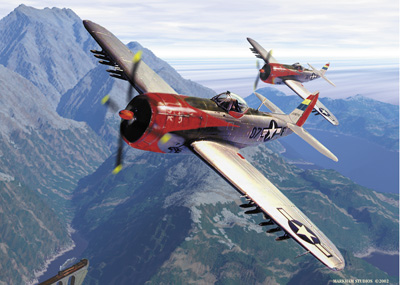 Affectionately nicknamed "Jug," the P-47 was one of the most famous AAF fighter planes of WW II. Although originally conceived as a lightweight interceptor, the P-47 developed as a heavyweight fighter and made its first flight on May 6, 1941. The first production model was delivered to the AAF in March 1942, and in April 1943 the Thunderbolt flew its first combat mission--a sweep over Western Europe. Used as both a high-altitude escort fighter and a low-level fighter-bomber, the P-47 quickly gained a reputation for ruggedness. Its sturdy construction and air-cooled radial engine enabled the Thunderbolt to absorb severe battle damage and keep flying. During WW II, the P-47 served in almost every active war theater and in the forces of several Allied nations. By the end of WW II, more than 15600 Thunderbolts had been built.

The Hawker Typhoon was the result of Air Ministry specification "F.18/37", which reached final form in early 1938 and specified a heavily armed interceptor to destroy heavy long-range escort fighters. The specification called for an armament of twelve 7.7 millimeter (0.303 caliber) Browning machine guns, or preferably four 20 millimeter cannon if development of these weapons then in progress proceeded on course. The so-called 'N type' fighter (developed in parallel with the Tornado) was powered by a 2,180 HP Napier Sabre engine. This powerful engine gave the Typhoon exceptional low-altitude performance, but it had a lot of teething troubles. Another problem was the conservative wing design, with a thickness of 18%, which was resulted in serious compressibility problems. A bad high-altitude performance and problems with the tail structure (finally traced back to a failure of the elevator balance weight causing flutter) sealed its failure as an all-round fighter. The Typhoon then earned fame as ground attack aircraft. 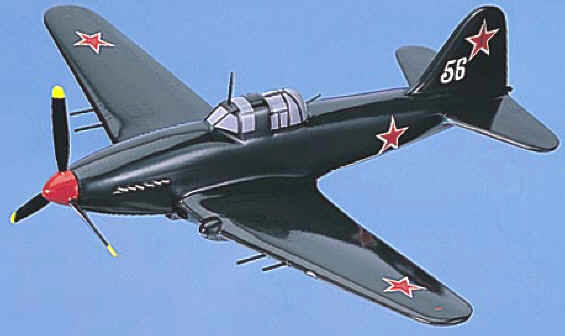 The Soviet Ilyushin Il-2 succeeded where the British Fairey Battle had failed. Immense strength and armoured protection, powerful armament and committal to combat under heavy fighter protection all combined to render the bronirovannyi shturmovik (armoured assault aircraft) a decisive weapon in the Soviet armoury during the final two years of the war in Europe. Christened the 'flying tank' by the Soviet infantrymen, and the schwarzer Tod (Black Death) by the men of the German army, the Il-2 originated as a two-seater but was modified to a single-seater and in this form was entering service with the V-VS at the time of Germany's invasion of the USSR on 22 June 1941. However, in those early months of almost total German air supremacy the early Il-2s emerged amidst a welter of criticism, being found to lack punch against the enemy's armoured fighting vehicles (their principal targets) and hopelessly vulnerable in the presence of enemy fighters. The "Flying Tank" of the Soviet Air Force, the Il-2 has the distinction of being the most produced aircraft in history at a total of 36163. After the prototype was flown in December 1939, the production line was quickly opened and the aircraft entered combat in July 1941, just after the German invasion. From that point on the Shturmovik (armoured attacker) became a highly effective ground attack aircraft through to the end of the war with successive versions being fielded as late as the Korean War. Surrounded by armour 4 mm to 8 mm thick, the aircraft's pilot, engine and fuel tanks were difficult to hit from above and below, making the Il-2 near impervious to fighters and flak. Such rugged construction, combined with several cannon and lowlevel flying, made the aircraft a pivotal piece of flying artillery in opposing the German advance, then throwing it back. The initial single-seat versions proved vulnerable, so a second seat was added for a rear-firing gunner. Later versions were fitted with two 37 trim cannon which could punch through most tank armour.

The Stuka was the most famous of all planes used by the Germans as a sturzkamfflugzeug (divebomber). The Stuka was designed strictly as an army cooperation divebomber at the urging of General Ernst Udet. It is instantly recognisable with its inverted gull-wings, and fixed-undercarriage. The Ju 87 was ugly, sturdy, accurate, but very vulnerable to enemy fighters. The Germans learned in the Battle of Britain that its use demanded air superiority. It was too slow, unmanoeuverable and underarmed, but its effectiveness in destroying vehicles, fortifications or ships, or just scaring people, was undoubted. Its accuracy was high when in a full dive that was up to 80 degrees. Once the bomb was released it used an automatic pull-up system to ensure that the plane pulled out of the dive even if the pilot blacked out from the high g forces. The Germans fitted the wheel covers with sirens that were used once the planes went into a dive to shatter the morale of enemy troops and civilians. They also fitted whistles onto the fins of the bombs to ensure that the recipients knew just when the bombs were released and could track them on the way down. Over 5700 Stukas were built. From 1942 on the Ju 87G-1 was a dedicated anti-tank aircraft on the eastern front. It was fitted with a 1400hp Junkers Jumo 211J engine. The reduced speed and range was due to the armour plating installed to protect the pilot and gunner when flying low-level tank busting missions. It was armed with two 30mm cannons in pods under the wings and a 7.92mm machine gun in the back for the gunner.

Some aviation experts consider the FIAT G55 Centauro the best single seat interceptor produced for the Italian air force in World War Two. The Fiat G55 Centauro was a redesigned version of the G50 Freccia. Differences included a DB 605 A-1 engine, an improved fineness ratio of the fuselage and a redesigned wing, built in 2 sections ,bolted together at the centerline for greater efficiency. Metal stressed skin was used and the metal framed airlerone was fabric covered. The first prototype was flown on April 30, 1942 and production started in the beginning of 1943. The initial model was the G55/0 which held a 20mm MG 151 cannon and (4) 12.7mm Breda SAFAT machine guns. The "O" model was succeeded by the "I" model which held three 20mm MG151's and two Breda SAFAT machine guns. Deliveries of the G55 to the 53rd Stormo and the 353rd Squadriglia of the 20th Gruppo just started when Italy surrendered to the Allies on September 8, 1943. Because of Italy's surrender, the G55 did not see combat with the Regia Aeronautica. However, factories which were building the G55's were still under the control of the Republica Sociale Italiana (Salo Republic) in northern Italy, and several thousand were ordered. The G55 became the RSI's standard aircraft for their air force. Shortages began to develope as the DB 605 A-1 engines became scarce and only 105 FIAT G55's were produced by the time the Allies overran all of Italy. Other models developed based on the G55 which were the G55/II with 5 20mm cannons and the G55/S Torpedo Fighter, which carried one 979.2 kg Whitehead fiume torpedo beneath the fuselage. Both of these variations of the G55 flew in 1944.

The "Shinden", if it had go further than the prototype status, would have been not only a formidable opponent to the allied air superiority, but also one of the most original plane of its time. It was one of the rare aircraft to adopt the canard configuation (with the rudder near the cockpit instead of near the tail) and a six-bladed push propeller behind the plane.
The program started in Yokosuka under the direction of Masaoki Tsuruno. The concept was first successfully tested on experimental gliders (the MXY6). The concept and the conceptors were transferred to Kyushu (the new name of Watanabe) to pursue the development works. The main qualification of the Kyushu for that task, was that it was less overworked than its competitors in the Japanese aircraft industries. The J7W1 was intended to be an interceptor fighter. First, the canard concept was tested with three MXY6 gliders, then a designing team with
captain Masaoki Tsuruno (Imperial Japanese Navy) developed the J7W1.
Two prototypes were built, the first had its first flight on august, 3rd 1945. The second was never tested. It was an all-metal construction with a full retractable landing gear and a six-blade-propeller. Quantity production was undertaken, but no production aircraft had been completed due to end of the war. The J7W2 version was planned to get a 900kp Ne-130 axial turbojet instead of the radial powerplant.

Nice bit o research. Takes something superhuman to do all that trawling you must do...

How many times do I have to say this, the Shinden is the secret fighter! The Ki-51 is the japs ground attack plane :?

I prey you, please accept my suggestion.
You told me the Ki-51 is the ground attack used for the Akagi and I can't agree more, while the Renzan is the Turbojet secret fighter. If the Shinden is changed Japan will be nerfed to the death

No the the Akagi use D3A1's

? Do you have some pics and infos?

Why is the Stuka mentioned in an interceptor topic? :?

Hey... checking out the competition

I call them ground attack planes, but Rygar calls them interceptors for some reason...

Both definition are correct. An interceptor is not a post WWII definition. It was used in past to describe an aircraft able to attack the enemy in the ground.

Perhaps calling them "Ground Attack", or "Ground Support" might be less confusing? (I keep getting them mixed too

Ground Attack Aircraft it is.

I'm surprised, why the name interceptor is so confusing? Several WWII aircraft sites use this definition without problems.....

As a rule, "Interceptors" refers to craft whose role it is to intercept opposing enemy fliers...

Even if a few sites use the term, it is unusual (they might even be mistaken...).

I suppose it is a bit like calling medium tanks MBTs - yes, medium tanks did the 'main' fighting, but the term is incorrect (and so confusing).

Still, it's fixed now, so no worries.

We just have to sort out the prob with the Shinden now...!?

just wait to see the Japanese secret unit and you'll know why Shinden needs to be standard...

just wait to see the Japanese secret unit and you'll know why Shinden needs to be standard...

Well last time we talked about this, he wanted to add the Nakajima Kikka, which is the jap copy of the Me262...