47 replies to this topic

As the mod moves closer to release, we're finishing off some minor work on the other factions. We've been concentrating on Isengard and Rohan, as these two factions were the most incomplete in the old Rhovanion Alliance Mod.

The bulk of Rohan's forces have been recently remodelled and reskinned to match the high artistic quality that characterizes the Dwarves and other factions in The Dwarf Holds. One of the key aspects of this quality is randomization. In our other factions, we've included variety within hordes - for example, there are 32,000 possible Orc Warriors that are randomly generated when the player builds a horde. Our new Rohan is no different - but the scale is even larger. Riders of Rohan have, for example, a pool of 24 million possible variations - no joke! Chances are that you'll never see the same Rider, mounted Archer or Yeoman in the same game. 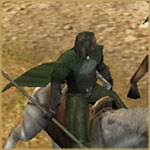 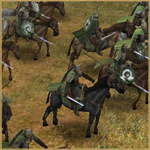 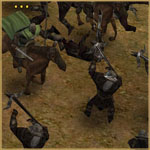 We have also of course eliminated the vanilla BFME gold armour, and added a new effect for the Forged Blades upgrade - Tengwar runes are inscribed on the blades of upgraded weapons in Good factions. 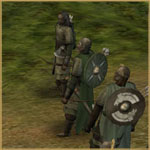 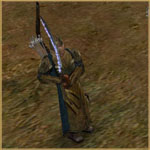 I'm particularly proud of our work on the Peasants, who have also been remodeled and given a horde of amusingly agricultural weapons - your undrafted peasants will now wield pitchforks, scythes and rough axes, and gain some more professional weapons and shields when drafted. 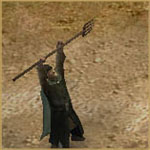 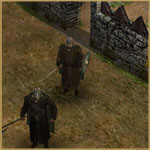 On the left, peasants claim a farm. On the right, they are drafted into its defence 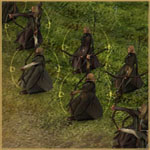 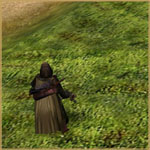 The Elves, Aragorn and Legolas have also been given their Rhovanion Alliance models

Secondly, as Gimli son of Gloin has been moved to the Dwarf faction, we're adding a new Rohirric hero to replace him. Enter Elfhelm, a heroic Marshal of Rohan who fought in Theoden's host at the Pelennor. After the battle, he was given command of the Rohirric forces charged with the defence of Anorien and Gondor while King Eomer and the Lord Aragorn led a host to challenge the Black Gate. He was later honoured with the rank of Marshal of the East-Mark on Eomer's victorious return. 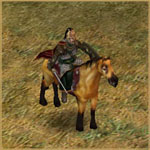 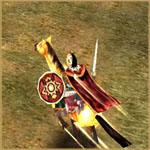 On the left, the mounted heroes of Rohan. On the right, Elfhelm using his Outrider power

In the mod the combat capabilities of King Theoden and Eomer have been increased, and Elfhelm has claimed the role of early-game hero. His heroic powers include the ability to detect invisible units, a power that boosts his speed temporarily, and a leadership bonus to mounted troops. His late-game power is very potent - he can declare a Blinding Charge, stunning enemies that are nearby and negating their pike damage for a short period. Combined with Theoden's Glorious Charge, this is sure to be devastating.

The forces of Saruman have also recieved a facelift so they can stand beside their old foes. Lurtz and Saruman have new skins, and the Uruk-Hai now start off in the rough leather armour of the Scouts, and are upgraded to plated armour. 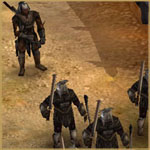 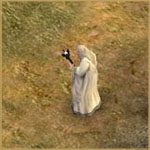 Warg Riders have new skins as well, and all units have a new, subtle effect for Forged Blades - runic Black Speech inscribed onto their weapons. 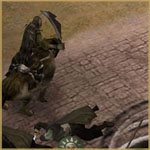 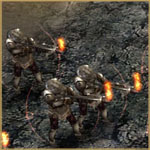 That's all for this week, hope you enjoyed the update!

Wow, that looks awesome. Can't wait to see it all in action.

I hope the writing on the blades shows up well. But I trust you would make sure of that.

Those look so amazing

.It's good you implemented a few things ( but I see more then " a little" ) From RA other then Dwarf stuff. Those elves ...

Mmm you have no idea.

I hope the writing on the blades shows up well. But I trust you would make sure of that.

They're intentionally almost invisible at zoomed out levels (show up as either a blueish tint to the blade or an increase in brightness), but clearly visible at about half of max zoom, by intention. This is so you can look at your army without the significant distraction or the glows, but do a quick zoom to check which units have which.

Probably off topic but when you mentioned that Gimli was moved to the Dwarf faction I could only wonder. Will he be a summon for Rohan or exclusively for Dwarves?

He's moved. Rohan get Elfhelm instead.

yams in a can

yams in a can

Friend of the Right Side

I find it a brilliant idea that you added writing on the blades. It makes it look like it's glowing, but if you zoom out, it's not

-yams in a can

WOW! The is amazing skin and units!!!

The mods better than EA!

Calm down. We get the point. You don't like EA and Warner Brothers are bringing out a new game. You don't need to say it in EVERY post.

That's interesting. It could really mess with gameplay if you couldn't tell while zoomed out, considering my mouse doesn't have a scroll. I guess we'll see. I can always use the keypad for scrolling, I hope it won't delay me too much. I hope it doesn't look nasty and blurry on lower graphics settings.

So far as I'm aware, the effect isn't quite related to the graphics settings. I play on Low and it shows up fine.

i suggested this idea to s.e.e. (the runes on blades thing), but then i realized that it should probably stay with you guys, you know, as a unique signature thing. and i totally accept that you want to keep this in your mod only, nertea. i will give a suggestion though: instead of tengwar for all the good factions and black speech (still tengwar i think) for all evil factions, it could be more unique per faction, based on what writing system they used.

so tengwar could be used for the forged blades of elven and gondorian units,
cirth could be used for dwarven units,
a more simple form of cirth runes for dale, rohan, shire (i dont think there are any), moria, and isengard units,
tengwar (the one ring inscription) for mordor forged blades,
and harad and rhun units could have the writing system from the easterling armor in the movies:

since i dont have bfme1, i'm a bit disappointed that i can't play your awesome mod...