38 replies to this topic

Wohoo, the LONG awaited Harad units, originally put together and promised by Flameguard, is now finished models, thanks to "RG" (Rigger Geel). Note that the insane amout of gear is cause the units will be coded with LUA scripts in game, so all the gear will randomize =) 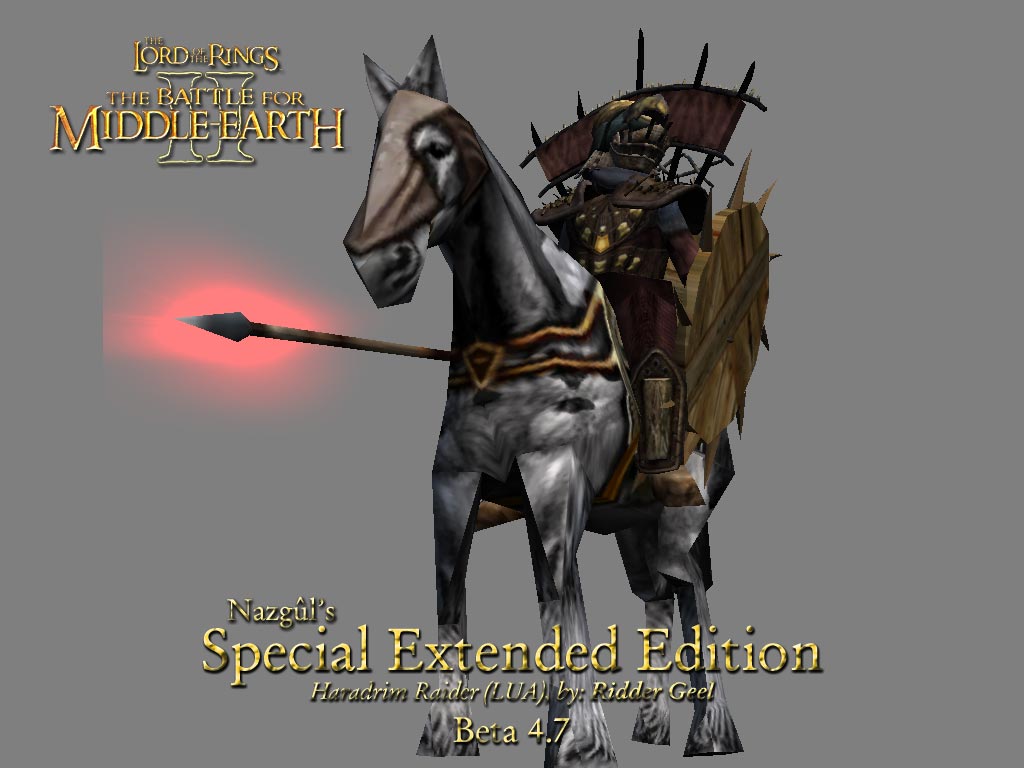 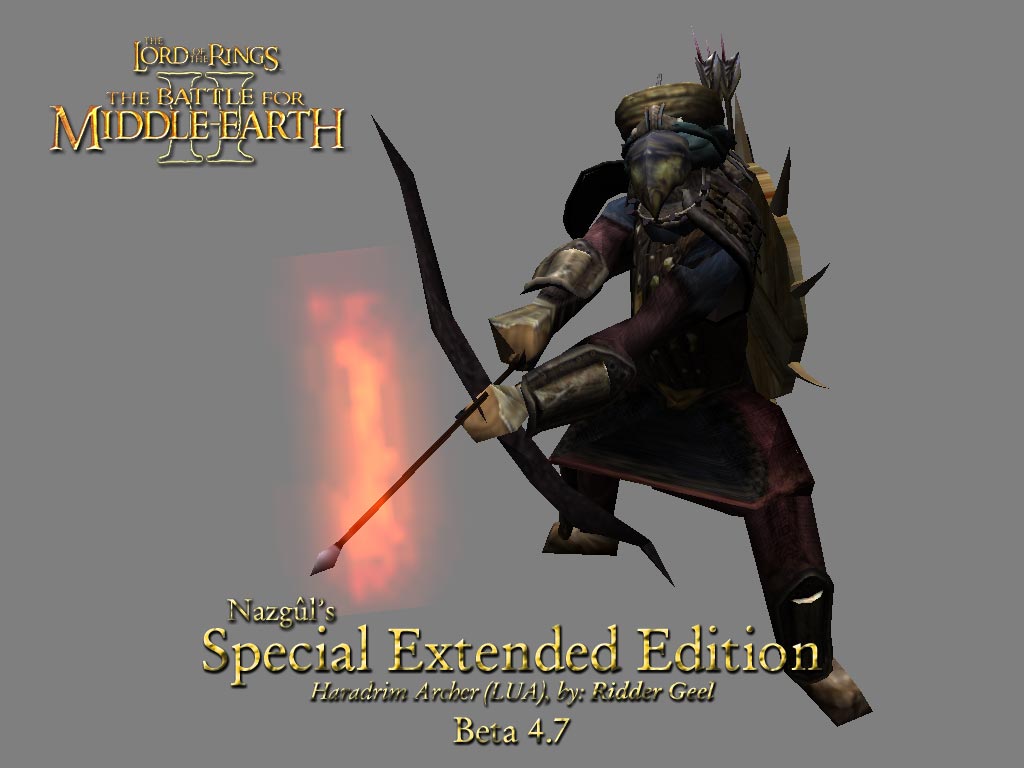 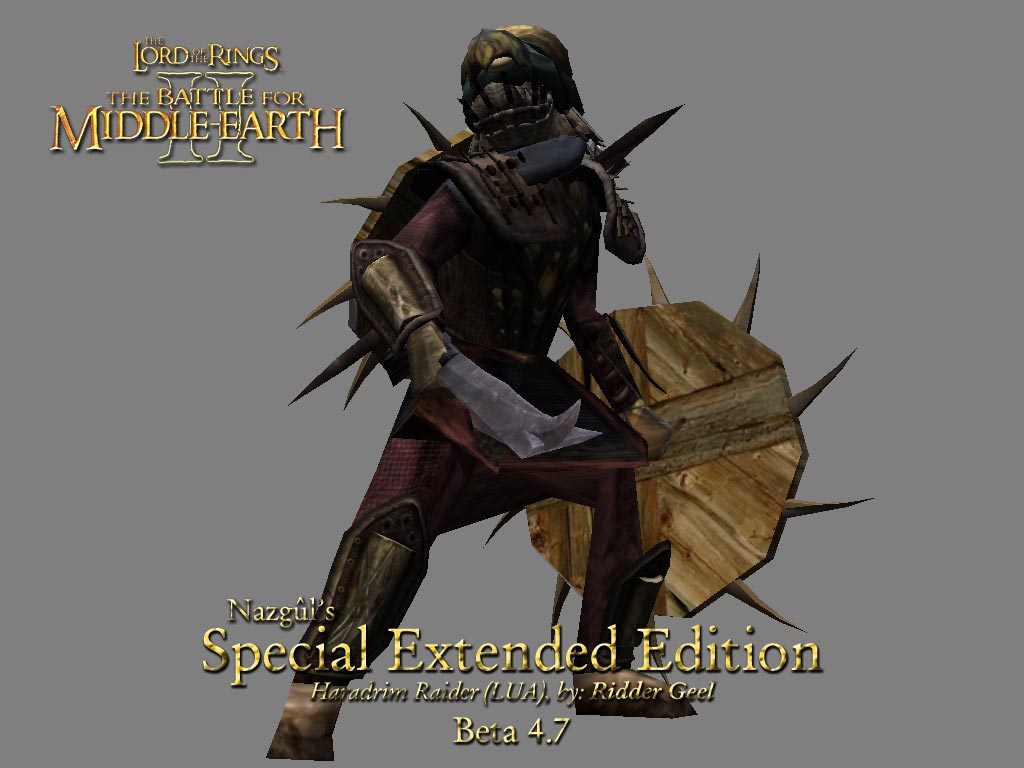 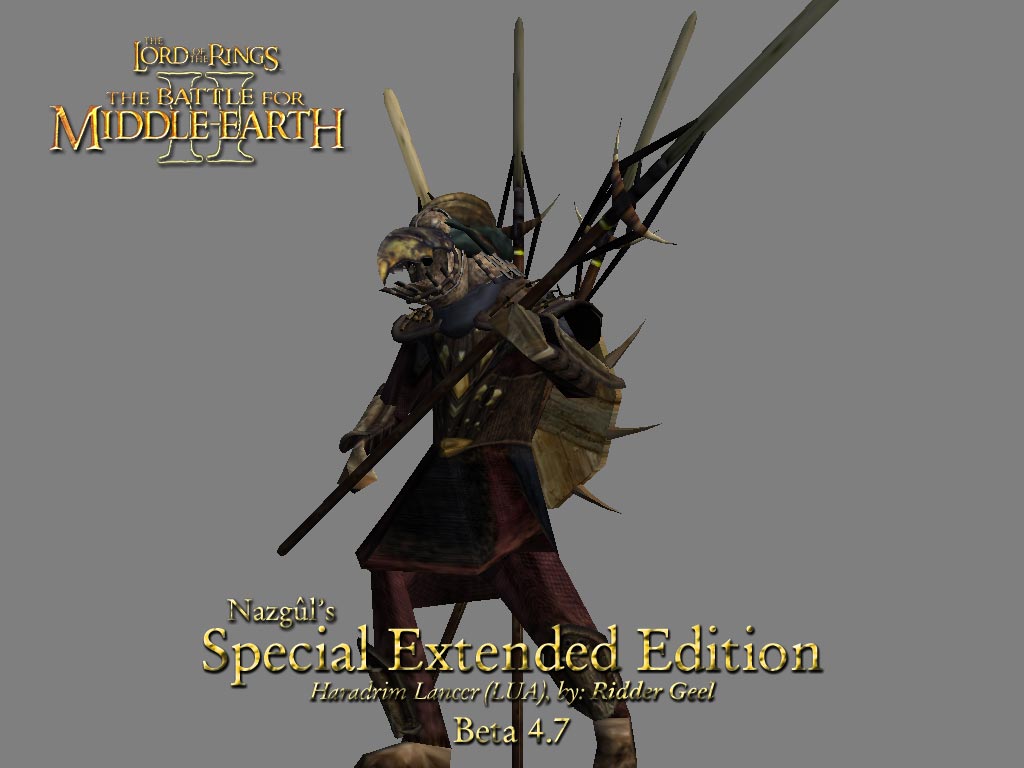 All that remains now, to complete this set of faction units are:
- Cavalry BC for Raiders
- Foot BC (same for Archers, Swordsamen and Lancers)
- Mahûd units

Looks great! Were we still going to use the FB?

Great, great work!
I've posted this preview on my site.

The lancers throw, melee, or both in SEE? Also about how many different variations are there for each unit, just a rough guess is fine?

The lancers i think they throw them... and when enemy is close they do melee

The look great! Next beta is going to be awesome!

No chance of returning....Zero chance of surviving....Well!? When do we get started?

this looks really nice. it's great to have someone of rg's talents in this mod. as a note though, haradrim is already plural. no need for an "s" at the end of the topic

edit: i am personally in favour of keeping the evil men together for the sake of good heroes and powers (without having to stretch significantly away from the source material). the faction should be centred around the rhun and harad units, with corsairs for support.

the great news is that the hasharii, soldiers of rhun (easterling spearmen), easterling pikemen, swordsmen, wainriders, and kataphrakts are all done, the corsairs and mumakil are already in game, and the harad units you have just shown are simply fabulous. the mahud units would just clutter the infantry niche, so i think they should just be a lvl 10 summon for the mahud hero (a bat or two of bludgeoners and camel riders). khand units would just be spellbook summons and inn units. so as far as the main faction goes, all the rhun/harad units (except corsair ballistas, which i would choose over catapults) are already done! yay! i love the progress being made. if you need any ideas for spellbook and hero powers (which is the next phase in production i think), you can take a look at my 4.8 suggestion thread. i'm lovin it guys. keep it up!

as a side note, can the existing haradrim bc (on foot) just be reskinned?

Eventually, the factions will split, for the same reason Gondor and Rohan will. Too many structures and units in one faction, and different cultures. So the Mahud will fill up nicely in the Harad faction. I know it's fiction, but so is Tolkien's lore

I'm bending the rules for the sake of gameplay and cause I like it. I'm not expecting everyone to do that... =p

So your going to put them in just to see how they play to more customize them for the split to fill those niche rolls?

Yeah sorry, I use too many run on sentences in forums. The other options is big long overly punctuated sentences that seem out of place in forums(in my opinion).

I also kind of thought alongside khamulrulz thinking since for the current release everything is kind of full that it would be unnecessary to have even more units since it would just be extra work for what is a considerably complete faction. But if you really intending to split them eventually its best to get them in to get an idea how to play. Kudos to the team for going the extra mile and planning ahead

the mahud aren't that "lore-unfriendly", since this is a movie mod. its basically those guys that drove the mumakil. in the book, there were "men like half-trolls" from far harad, which are basically these guys. i still think that the mahud units are a bit redundant, and should only be a summon for the mahud hero. the rhun/harad faction already has 3 infantry and 3 cavalry units.

edit: the reason why i wouldn't have the mahud to have a place in the main faction is because even in the books, the "troll-men" had a very limited role, as did the variags. so the faction (for the next beta at least) would be focused mainly on men of rhun and near harad. i do think because the mahud and variags are cool, they should still be in the game, but a lesser role (mahud are just summons for the mahud hero and variag horsemen are a spellbook summon, as well as variag mercenaries (axemen) as an inn unit)

edit 2: for the time being, because rhun and harad are together, there doesn't have to be so many structures that really make the current motw faction redundant, like windmill/mill, two different arrow towers, the harad citadel, blacksmiths for both, stables for both, etc. the building lineup should be limited to the following 12 buildings:

Just a question about the Mahud, are you all still pursuing the Mahud to be on top of a Mumak? Is that going to come as an upgrade, or as some kind of combination thing like Merry/Pippin with Treebeard? I think its far easier to make him an upgrade that affects speed( move, attack, turn rate) and slight attack buff(perhaps even to the archers in the back). Also its not like he moves much anyways, he just sits and slightly moves the reigns.

if i understand correctly it is the equivalent of the bc upgrade for the mumak.

when they're ready (if they aren't now), i would love to see in-game shots of these haradrim, to see the variation

I'm working on it... The mumak and stuff has already been rebound by me... Al that remains is the animating and the putting of the guy on top

So i thought, why don't I do it

Ridder Geel
Back to Harad faction