Alright, so it's been nearly a week since I got hosted here, and I've been very busy as of late both with getting my website set up and balancing schoolwork in the mix, but I think I am finally ready to get settled down in the revora network...

So, as a little introduction to get things started, I'll post up some info about my mod from my website, and a couple of fresh, hot-off-the-press screenshots of some new things I have been working on.

STORYLINE:
This is my current storyline. Since this is Beta and the campaign won't be finished for awhile this is subject to change, but I think that this will work for now. Anyways:

With the war over, and Yuri sealed away in time forever, it seems like mankind can once again rest in peace. The mutual alliance created between the Allies and Soviets has surprisingly held.
Now, in the aftermath of a devastating era of conflicts, there is finally a resting period where the world can recuperate and bring itself back to the way it was before the whole mess of the world wars happened.
However, The legacy of Yuri isn't completely dead just yet. Yuri had a special research and development team, who call themselves "Avengers", and they still have the weapons and the resources to fight.
Despite them being under Yuri's command, the Avengers are quite different than Yuri's own army. They have tons of 'otherworldly' technologies, but none consist of Yuri's psychics, mutagenics, kinetics, or the like. It is like a new faction entirely.
Nonetheless, after Yuri's defeat, they are bent on nothing more or less than the utter destruction of the nations that sealed Yuri away. The world must once again brace itself for a catastrophic conflict.
The Avengers may also attempt to steal our time machine, or replicate its technology. We may have to use our own time machine, given we still have it, to battle thiers.

MOD FEATURES:
The mod is very much like an expansion pack to Red Alert 2: Yuri's Revenge. What the mod focuses on gameplay-wise was really cleaning up the balance in the game; if you were a very experienced player like I was, you would agree that there were many gameplay issues. Another focus on the mod was adding new units wherever necessary. For instance, the soviets get a main airforce now (besides kirovs and choppers), both factions get an APC, brand new anti tank infantry (which really helps infantry equal tanks on the battlefield) and heavy infantry that decimate other infantry at close ranges. Another addition to the mod was an extra tier of units. The Allies and the Soviets are both different in the new techs. The allies get very advanced aircraft, like the Laser Chopper and the EMP bomber. The Soviets get new experimental weapons, like the Lightning Storm Tank, the EMP Tank, and the stealthy Flame Wall Tank.


I will start posting up unit profiles for the 3 factions when I get the time, but for now some highlight screenshots will do: 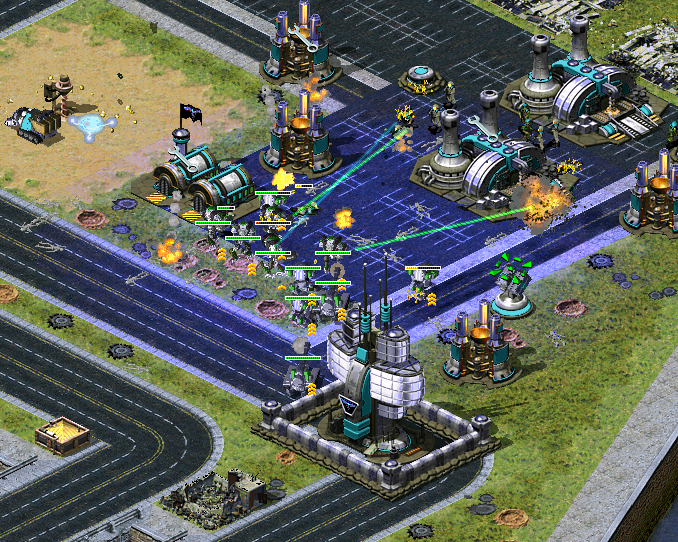 A mid-tech allied assault with a mixed and varied force of tanks and infantry. 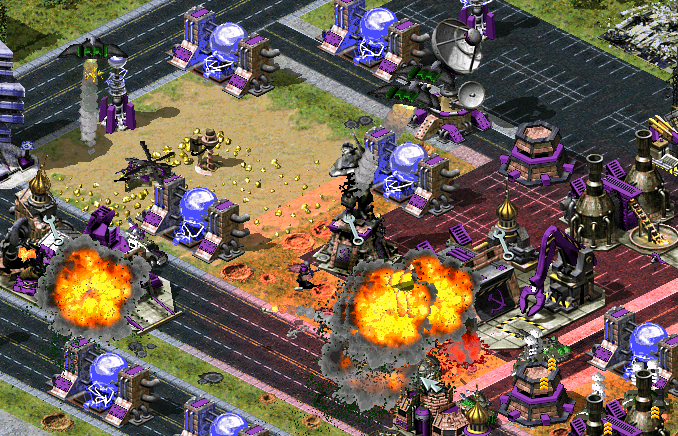 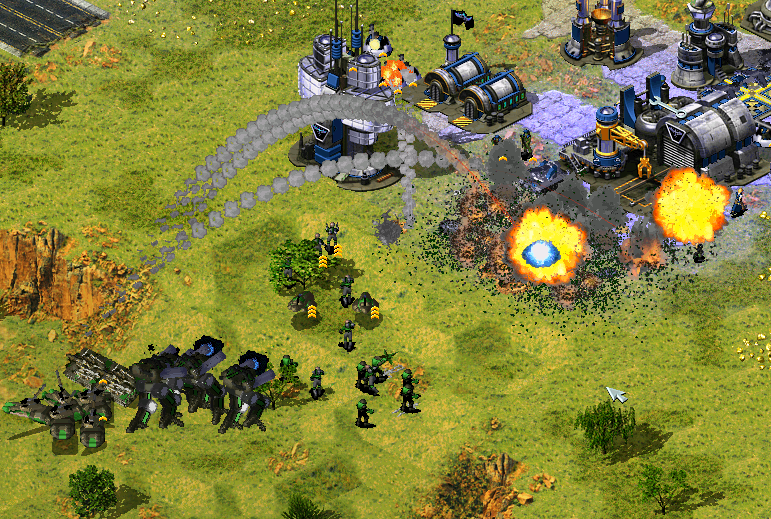 Finally, some kind of screenshot of an avenger assault 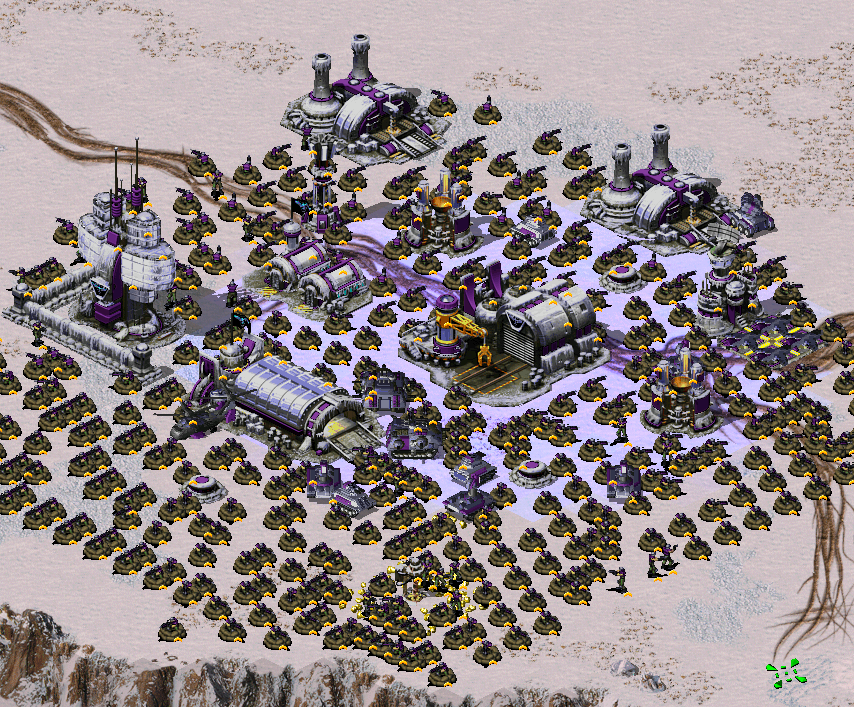 While this wasn't a new feature, it was higly amusing. Long story about how I wired the AI to produce this. 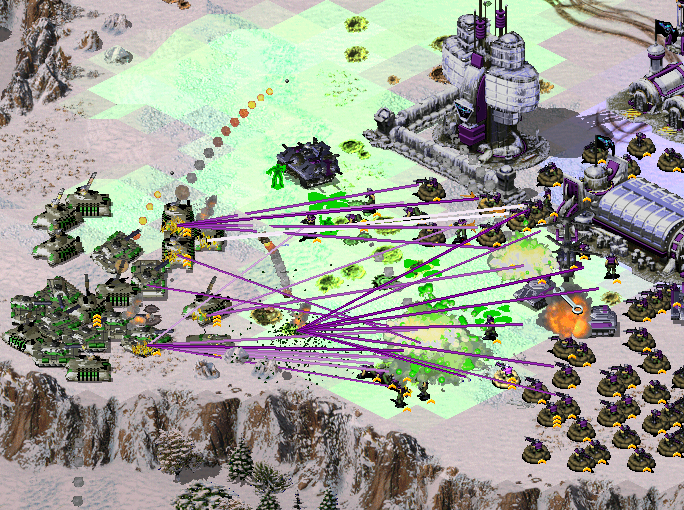 And this is me having loads of fun killing them all.


More to come over the following week, stay tuned, I'll keep you posted with the lates info on my latest developments.

yeh lol... No it's not public, it's the first mech voxel I've ever made by hand (and for my first it isn't too bad). I know what the problem is too, I just haven't really had time to fix it. If you REALLY want to take on the job yourself go for it, I'll PM you the file and details on what i think the problem is. It will involve basically re-writing the leg peices in a voxel editor (tip: you can copy/paste because the leg pieces are identical) and correcting them in the HVA animation. It isn't that much work now that i think about it, but anyways...

What about the unit's abilities? Nice work! Keep it going!

You will have to wait awhile to see full lists on unit abilities. I have to post up individual unit profiles for that

Nothing really to elaborate on black line syndrome. The normals aren't tuned for those gaps. I'd fix them

ok, so its Soviets and Allies against...

((incase you're missing the hint, you need to come up with a better name that doesn't sound like a comic book hero squad))

LOL, I've never heard of the Avengers as a comic book hero squad before....

In any case what would you recommend I change it to?

The "history books" of my mod pulls out the name "Proselyte" as the name of the research team that the "Avengers" was derived from... and considering it's still a Yuri derivative faction the name is quite appropriate. What do you think?