Detail - 6 / 20
Detailing was pretty plain. There was no great usage of the LAT types apart from the odd bits of rocky ground in the center island but it didn't really look too good in my opinion. Use of rocks was good in the middle, but no-where else. There were no trees, or any other details worth mentioning aside from the strange airplane racetrack in the middle. Shores were blocky and so was the pavement LAT in the base areas, not a fan of the detailing at all but it's evident you did your best, so kudos.

Lighting - 4 / 20
Global lighting changes were minor and it looked pretty much the same as the default lighting, so I wasn't really fond of it. There was no use of light posts in the map either, so by default there's a 0 for that.

Layout - 5 / 20
The layout was nothing unique, one very tight chokepoint into each base which makes the map quite a campfest, the large open spots in the middle could make for good battles though. The ore islands isn't a great idea either seeming as there is nothing worth fighting over (aside from the building in the middle) as each base gets its own practiacally unlimited ore supply, the gem islands can't be built on either so there isn't much use for them. A bit more creativity in the layout would of gained you a better score.

Triggers & INI Tweaks - 9 / 20
Well the first trigger was a hint towards the purpose behind the building in the middle which acted as a special oil derick, which was a pretty interesting INI tweak. The "Player has left their base" text triggers are not very useful either seeming as they can be set off by a scout unit or even a miner. But they were unique, something was attempted that isn't done very often (or even at all). I'll give you a 5 for the text triggers as they didn't serve much of a purpose but at they were unique and a 4 for the INI edits.

Aro's Personal Comments: A Relatively decent map in some categories but nothing special. The layout wasn't too my liking as it was too simple and there was nothing to fight over bringing down the game play for both online and skirmish. Lighting, especially in RA2 is hard to get right but uniqueness and realism can still be acheived, take a look at some of RA2's maps that use Light posts, it is possible to make it look smooth and not blockless. Well done to you overall though, you did what you could and it wasn't all bad, there is just a lot of room for improvement.

Detail - 8 / 20
For what there is there is detail in LAT, rocks, and civilian placement. However, it needs more. Trees or even slopes would give detail a boost. Would have really liked to see a village or small city area on the middle of the island though.

Lighting - 6 / 20
there was a tiny tiny edit to the global lighting that i honestly didn't even notice in game. no use of light posts either. So just nothing out of the normal. So due to slight edit I'll give a point more than I would if you would have just left it alone completely.

Layout - 7 / 20
Rather symmetrical and not too much really went into this layout. It's simply a flat island. Putting a good sized ore field with a good bit of ore mines was in my opinion not a good idea since the only ore fields are behind player start locations thus making them quite safe for a human player.

Game-play - 8 / 20
Game play was simply ok. I found that ore was too easy to defend against the AI, and with only one land opening it was too easy to guard against the AI too. Of course gameplay would be MUCH better against a human player as it would on most maps but more so on this one as well there's just too many factors that make the AI predictable and easy to counter. The layout of the map also made it easy to take out the AI since they don't fix bridges that lead to their ore and don't go around your blockade of units in front of their base.

Triggers - 9 / 20
There were a few triggers, however, only the first one which tells you about the McBurger Kong worked for me the other 4 which say when someone leaves their base area did not fire. Which by me was okay cause I'm not sure if i like the idea of letting people know when a player or AI first leaves their base area. Also the edit to the McBurger Kong to be like an oil derrick was good.

Ixith's Personal Comments:
Overall it was a rather basic map that if more time was put into the layout with the addition of cliffs and more bridges to give another entrance into player base areas it would have been much better. Certainly best for online play where the players would (well if not a rush rush rush match) fully utilize the openness of the map to sneak into player base areas and cause havoc. Good job on the entry. 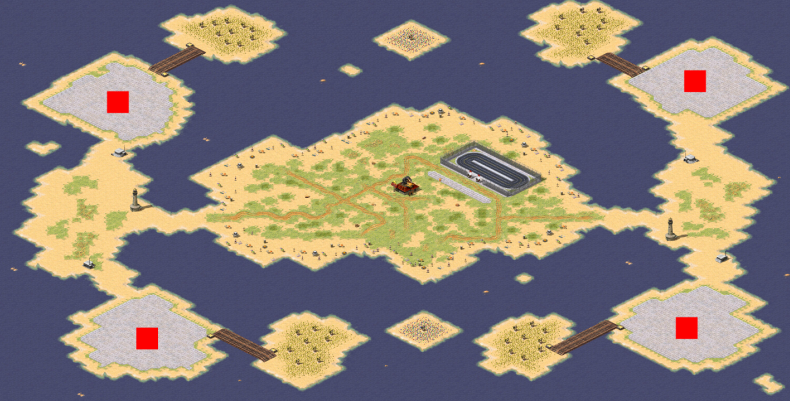