I'm been doing nothing but ini & shp work for a month so I took a brake & quickly made a voxel of the BICh-26.

Cheranovskij originally started work on a tailless jet fighter project in 1944 which lead to the BICh-24, extensive wind tunnel testing was done on several models however development never progressed any further. Research continued & lead to a variable-sweep wing design with an outboard wing pivot in 1948 called the BICh-25, very little other information is know about this aircraft tho. Around the same time Cheranovskij designed the BICh-26 which externally looked very similar to the BICh-24, a tailless delta wing design with a single fin & engine. Several more years where spent refining the design & demonstration models where built, but by then less complex & more readably available design from Mikoyan & Sukhoi where being built & then with the death of Cheranovskij the whole project was cancelled. 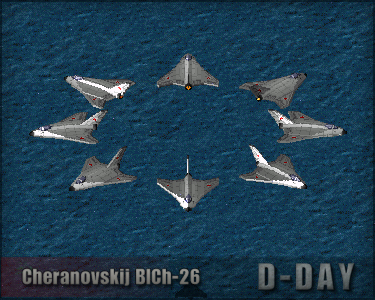 Information on this plane is very rare & there are no images of it on the net (that I can find) so I scanned several from the book "Soviet Secret Projects: Fighters Since 1945".

This is from the cover of "Secret Projects: Flying Wings And Tailless Aircraft", which shows the BICh-26 intercepting American B-49 bombers. Unfortunately it's the only book in the Secret Projects series I don't have but it's next on my shopping list!

I love these "could have been" weapons. Imagine the battles....

AW :( Such a nice looking thing, cancelled. Oh well, you know what they say; "Lifes a BICh and then you die."
Can't rival the Vulcan for looks, even so.

What if I said I was thinking of changing the Vulcan for something a bit more "what if"...!? I plan to make a few changes to the post war unit list to include more prototypes (this BICh replaced the Mig-15 etc).

What if I said I was thinking of changing the Vulcan for something a bit more "what if"...!? I plan to make a few changes to the post war unit list to include more prototypes (this BICh replaced the Mig-15 etc).

I think I would love to see that. The possibilities are almost endless. You could have a little "fun" with weapon types and so forth.

I like the Vulcan for what it does not how it looks, which is shoddy and half baked. Just look at the kinks in the leading edge for W's sake.

The BICh-26 on the other hand is a beauty! But it is a terribly flawed design, which is why it was never built. Look at all the other weirdo designs the Reds built, but they did not build that in spite of all the conferred advantages!

Low aspect ratio wings have tremendous advantages when it comes to speed, low wing loading and ability to pull very high AoAs. But they suffer in sustained maneuver, range and cruise speed. The three reasons why it was never built.

I like your idea, but what game are you talking about? I am the worlds worst tinkerer with such things and love to get my fingers into as many pies as I can.

What system are you playing? Several posts WO using the "Quote" button, so I failed to get the right party to get the question.

I like doing what if games just to see how they turn out.

Has anyone here thought about an alternate WW-II?