I'm in a sharing mood so I thought I'd post a few random bits that missed the last news post & wont fit into the next...

First up is the the A12 Scorpion flail tank, this whirling derby of death doubles as both a mine layer & a mine clearer. To lay them all you have to do is deploy it & it will randomly scatter several mines around it's self, then to clear a mine field all it have to do is drive though it. Mines will only activate when an enemy unit drives over it & in turn the Scorpion will only clear enemy mine fields. It takes a bit of micro management but watching the AI drive straight into a mine field & the resulting carnage is priceless XD

As well as the Scorpion I also have Sherman Crab & Churchill Toad flail tanks for the British on my todo list.

Next is D-day's first tech building & I thought I'd start big... with a big 380mm coastal gun!
Originally made for the Bismark class battleships these guns where used as heavy coastal guns along the Atlantic wall. These big guns can be a real pain if aimed at you so I'd capture them fast & show your enemy the meaning of pain! 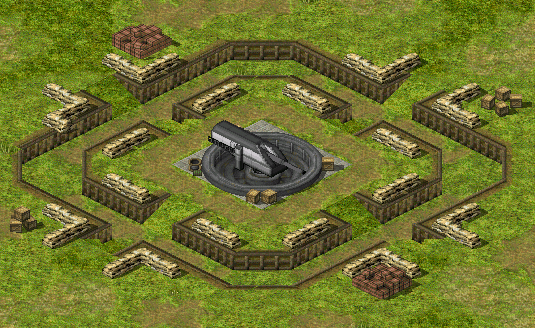 Lastly is a new skirmish menu screen which takes advantage of some of the new Ares features. 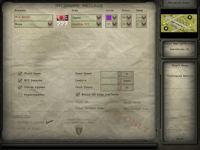 I'm not sure when the next news post will be but it will be a big page filling one, so check back in the coming weeks for that.

Cool, and bloody love those trenches.

That looks fantastic! love the unique aspect given to all units. It is going to be really hard decided what units to build for my army when I play this!

keep up the awesome work!

I have been following this mod for quite some time now (However, I only recently registered). I have to say, you are exceptionally skilled at making high quality voxels. This mod looks very promising, and I hope to see a new release soon. Keep up the good work! ~Brutal

I'm new to the modding community, but a veteran of RA2YR, found your place from the Renegade Projects Network Forum. Your work is beautiful, and I eagerly await its release. I wish I'd come around sooner to help, but I've got a ways to learn yet. You give me hope for the future of this game and the future of Red Alert. No matter what EA manages to screw up, I'm glad we have people in the community who keep the spirit alive.

Nobody here but us trees...
Back to D-Day News