Welcome to the first Gondor update, featuring the Steward Denethor and his newest Citadel Guardsman.

Denethor is a rather unique hero. Firstly, he doesn't gain levels - he stays fixed at Level 5 when you train him - after all, he is rather stangnant in his ideals. This doesn't mean that he's any less a force to be reckoned with, however. He remains the only hero with a retinue - when trained, he is surrounded by four Guardsmen, who will attack enemies if the Steward so requires. He himself will hang back and observe. If they die, they will be replaced after a short duration. 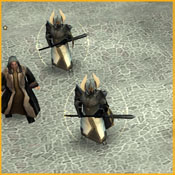 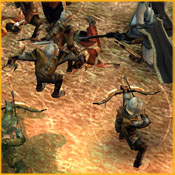 His abilities are also somewhat unique - many of them have disadvantages as well as advantages. He can gaze into the corrupted palantir of Minas Tirith, revealing an area, but at a cost to his own sanity. After such an undertaking all of your troops on the map will be debuffed for a short while, so take when you use it. His Shrewd Leader aura is also a double-edged sword: it provides bonuses to attack and armour, but decreases experience gain and fear resistance. As a counterbalance, he does have a powerful experience-granting ability, Steward's Favour, which is more powerful than others in the game. His most unappealing attribute though is his tendency to see others as a threat to his kingdom. Last of His House passively damages 'threats' that are nearby - these threats are Aragorn and Gandalf. Though the damage is low compared to large health values, it adds up over time, so Denethor should not be placed idly near either of them, lest he undermine their efforts to save Gondor from the Dark Lord. 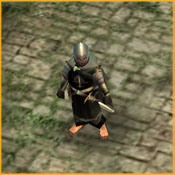 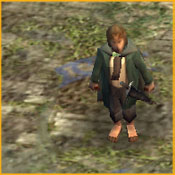 Pippin is a much more cheerful character. He keeps his Throw Rocks/Draw Sword toggle, and gains two new abilities. At Level 4, he dons his Citadel armour, getting a substantial armour bonus. At level 5, he gains the passive Trollsbane, an ability that greatly increases his damage against Trolls.

I like the way that Denethor has his guards to fight for him, and the creativity of his powers. And now my rank 5 or over Pippin will not be killed by trolls!

Oh that's just brilliant stuff! I feel so impatient for the next patch. Awesome! I love the uniqueness of Denethor's abilities. Two questions though:

Wouldn't it make more sense for Denethor to be surrounded by Citadel Guards instead of Fountain Guards? Also, why does Pippin's upgrade give him a damage buff instead of an armor buff?

The Guards of the Fountain Court (also known as the Fountain Guards or Tower Guards) were considered the best soldiers in the realm of Gondor. Chosen for their fighting skills, bravery, and unshakable loyalty, they were the personal guardians of the white tree of Gondor and to the king or steward of the throne. They were a handpicked few, selected from the best and brightest in the Gondorian military academies. They were often seen on the top levels of Minas Tirith, diligently guarding both the White Tree and the ruling Steward.

At Level 4, he dons his Citadel armour, getting a substantial armour bonus.

But didn't the Fountain Guards protect...the fountain? Also, this.

That was my mistake on Pippin's armor upgrade.

They are mainly a guard force rather than being a mobile force, but may have been at times used as a mobile guard for the Stewards.
...
Citadel guards are armed and armoured similarly to the regular spearmen of Gondor, but bear finer crafted armour and a lacking of pauldrons, increasing striking manueverability.

That seems to suggest that the citadel guards were less elite than the Fountain Guard, and only guarded the stewards occasionally - when not guarding the upper levels of Minas Tirith. Their armour is closer in style and craftsmanship to the regular soldiers than the Fountain Guards, who have greatly stylised helms, and the finest weapons and armour (believed to be made from mithril, gifted to Gondor by the Dwarves)

As i quoted earlier, the Fountain Guards protected the White Tree of Gondor (arguably Gondor's most important relic) and the Ruling Steward (and the top levels of Minas Tirith, where Denethor would reside). Also, they apparently would have "remained at their posts even if Minas Tirith burned all around them (lotrwiki)" - something that seems very much in keeping with Denethor's take on things, often being stubborn and impractical for the sake of tradition and so-called 'duty'.

I don't think it would make "more sense" for Denethor to be surrounded by Citadel Guards. The Citadel Guards could be interchangable with the Fountain Guards maybe, but it's not enough to justify reworking two whole units' worth of coding and assets

Well, to be fair, the assets already exist, but yeah, you're probably right. 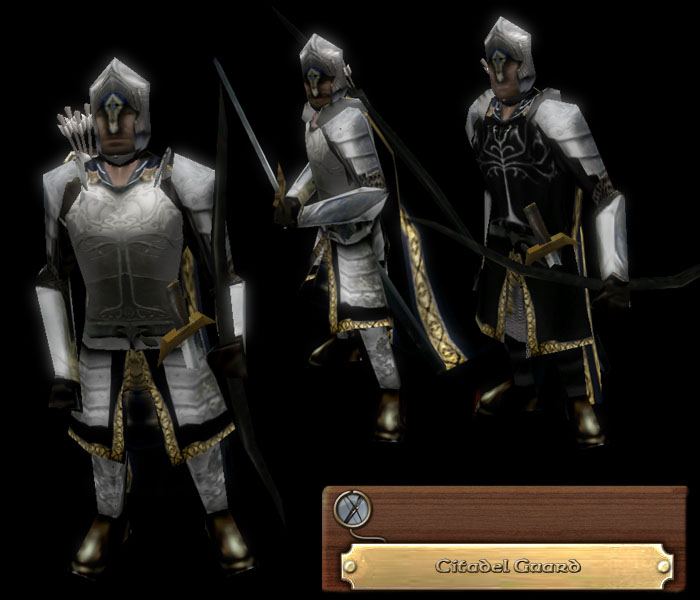 From a lore and film perspective, it would make sense for the Citadel Guard to have a role specially related to Denethor. In the extended cut of Two Towers, several Citadel Garden can be seen mingling with the Osgiliath garrison after escorting Denethor to the battlefield, while the Fountain Guard were only shown guarding the Fountain and White Tree.

All of that said, I think that what Nertea is doing with the Gondor faction and its units is an excellent compromise between all of the given evidence. I'll comment more in time, as he reveals more information himself

Perhaps Denethor should get a tiny scale-down? He looks rather large in comparison to his fellow gondorians.

Or maybe my eyes are messing with me.. It's late.

Perhaps Denethor should get a tiny scale-down? He looks rather large in comparison to his fellow gondorians.

Or maybe my eyes are messing with me.. It's late.

He's standard hero scale, so like +10% above regular units. It's probably telling because he's standing beside some 'proper' scaled units.

@ Yarrum: I have my reasons for doing what I do

So are their more goodies in gondor? cause I like where this is going.

This looks fairly awesome. However, I'm of the opinion that Denethor should fight even if his guards are still alive. If you were surrounded by orcs in a battle, you wouldn't stand around and wait for someone else to take care of it.

If you were Denethor you would

If you were Denethor you'd be toasted by now

Just curious, are there plans to make an updated campaign at any point in the distant future?

Amazing work. I can't wait to see it done.

You carry the fate of us all, little one. If this is indeed the will of the Council, then Gondor will see it done. - Boromir

I think they'd want to finish all the units and upgrades before working on a new campaign.