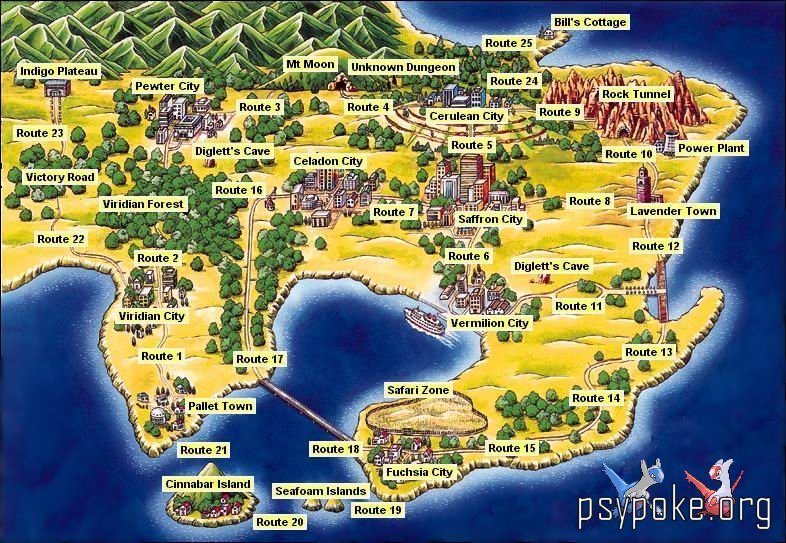 Pallet Town.
A large town/small city on the south coast of Kanto, south from Viridian City. Its only really notable aspect is that it contains the headquarters of Oak Labs, a dedicated pokémon research firm mostly funded by government grants. Pallet also has a university of sorts, but one that is, again, largely dedicated to pokémon research. Apart from that, Pallet has a large lumber industry and an equally large fishing community. Illegal pokémon fights are often to be found on the quays. The town itself is the culmination of a multitude of fishing villages along the coast, so can be extremely hard to navigate for newcomers, or even locals if they stray from their usual haunts.

Viridian City.
A middling city which plays host to the Viridian Gym, headed by Giovanni Vitelli, who is also the governor of the Viridian Prefecture, which includes Pallet as well. Victory Road, the route to the pokémon league, lies west of Viridian. Viridian has a large mining community based around the Victory Road mountains. The city was built relatively recently and laid out in a very uniform manner, which has its critics and proponents. Almost all of Viridian is built of the Victory Road stone, blasted from the mountainsides before mines could be opened.

Pewter City.
A large city, notable for being the home of Pewter Gym, headed by Brock Davis, and the History Museum, which was founded after numerous fossils were found in the mountains surrounding Pewter. It is extremely isolated, being hemmed in by the colossal Viridian Forest to the south and west and the Mountains of the Moon to the north and east. The path through Mt. Moon is very dangerous, as is the Forest Road, so Pewter has become a remarkably insular community. The major industries are mining, lumber and archaeology. Most visitors to Pewter come either to fight at the Gym or to look for new fossils, and twice a year to watch the onix migration. Pewter is really a series of mining towns that have all grown into one another over the years, so becomes quite a tangled hodge-podge of winding streets and overhanging eaves in places as space became short. The official city limits go right up to the edge of the forest and the feet of the mountains.

Mountains of the Moon.
High and largely impassable mountain range, eventually traversed by digging out a passage through tunnels dug by onixes in the past. It is something of a maze regardless of man's efforts, and the path often changes due to the roaming nature of the onixes. It is a favourite with hikers, who provide most of the income for the villages scattered across the mountains. The Mountains fall under the jurisdiction of the Pewter Prefecture. The Mountains are also home to one of Kanto's two indigenous machop settlements.

Cerulean City.
Home of the Cerulean Gym, led by Misty Lovecraft. Cerulean is a relatively large city, smaller only than Saffron and Celadon. A large part of the appeal of Cerulean to pokémon trainers is Cerulean Caves, notoriously populated by powerful pokémon. Along with the Mountains of the Moon to the west, this gives Cerulean a thriving trade in all things physical, from exploration to extreme sports. To the north the Cerulean Prefecture extends to encompass the Bridge and the Cyan Hills, notable for being the home of Bill Taylor, a well-known expert on pokémon and news personality. His home has become something of a pilgrimage site for professional trainers. He has recently declared his interest in becoming the governor of Cerulean Prefecture, his primary platform being an end to the pokémon league and all forms of pokémon battling. Cerulean is notorious for its constant programs of redevelopment, which have turned it from a confusing mess of alleys and back streets into a town of wide open boulevards and formulaic grid squares, but only in places. More than half the city remains a labyrinth.

Vermilion City.
Home of the Vermilion Gym, led by General James Surge, a man who made his name in the war for Kanto independence thirty years ago. Like Giovanni Vitelli, he serves as both gym leader and governor. Vermilion is the largest port city in Kanto and is also the location of the headquarters of Kanto's military, both on land and sea. The docks, just as in Pallet, often play host to illegal pokémon battling. Rumour has it that Surge secretly endorses this practice. Vermilion is a very orderly city, having been consistently rebuilt under the guidance of General Surge's ordered military thinking.

Lavender Town.
Seen by many as a morbid place, Lavender is the site of Kanto's largest graveyard, originally founded as a military cemetery for all those killed during the War of Independence, but later expanded to include pokémon killed in the war. Lavender is a relatively small town given its importance, as it has its own prefecture, led by Henry Fuji, another active proponent of making pokémon battles illegal.

Celadon City.
The second-largest city in Kanto, Celadon is a heaving metropolis with high proportions of the population in service industries. Sometimes known as 'Kanto's playground', Celadon Prefecture is the only one to have legalised gambling and bookmaking. Celadon also hosts The Mall, the largest retail centre in Kanto and one of the largest in the world. It is estimated that around one million people pass through The Mall every week. The Celadon Gym is led by Erika Havens, a perfumer by trade. Her Gym doubles as a greenhouse in which she grows most of the plants and pokémon whose scents she employs. Celadon is at the northern end of the Cycling Road, the over-sea path to Fuchsia City and the Safari Zone. The amount of traffic through Celadon makes it one of the richest regions in the world, and as such it is highly developed and Kanto's central point for technological development in all fields other than those related to pokémon, in which Silph Co., based in Saffron, exceeds them. Celadon House, now an entire business park, is the home of this industry.

Saffron City.
The Saffron Prefecture is the most populous in Kanto and the city is the capital. It is also home to the government of Kanto and claims to be the only city with two pokémon Gyms, although one of them is no longer affiliated with the pokémon league and thus not an official Gym. Sabrina Eckhart is the leader of the official Gym, though she is deeply unpopular around the city thanks to her aloof manner and apparent delight in the more terrifying aspects of pokémon. Anthony Kiyo is the leader of the unofficial gym and much more widely respected around the Prefecture for his honest and honourable behaviour, as evidenced by the frequent petitions to see him run for governor. As yet, he has refused to do so. The largest employer in Saffron is Silph Co., a corporation with interests in all things related to pokémon. Their CEO has stated that they have no need to expand further because they have the market so completely cornered. The second-largest employer in Saffron is the Kantonine government. The third-largest employer is the Saffron Times, the newspaper whose circulation covers all of Kanto and large swathes of Johto, Hoenn, Unova and Sinnoh, although their employees are largely based elsewhere. Saffron is also the location of Kanto's international railway station, linked with Goldenrod City, Pyrite Town, Fall City and Pueltown.

Fuchsia City.
The city of Fuchsia itself is relatively small, being little bigger than Lavender. However, it is the location which makes Fuchsia so important. To the west is the Cycling Road and all the commerce that brings with it, while to the north lies the Safari Zone, one of the premier travel destinations in Kanto. Such is its success, in fact, that every other nation on the continent has attempted to create their own in imitation. The Fuchsia Gym is led by Janine Serafian, the daughter of the former leader Koga, himself now governor of Fuchsia Prefecture and one of the 'Elite Four', the top-ranked trainers in the pokémon league. Fuchsia's economy rotates almost entirely around the Safari Zone and the tourism that it brings, though there is also a reasonably-sized fishing industry, and some more intrepid tourists use Fuchsia as a base from which to travel to and explore the Seafoam Islands.

Seafoam Islands.
The islands are the most popular destination for aficionados of water- and ice-type pokémon in Kanto, and as such have become reasonably heavily populated, both with permanent residents and holiday homes. There is also excellent skiing and hiking to be had, and the Seafoam Caves remain a favourite. The islands fall under the jurisdiction of the Cinnabar Prefecture, although they are a separate archipelago.

Cinnabar Island.
The island town of Cinnabar is rather sparsely populated but hugely important to Kanto. The volcanic soil of the island produces nearly one third of the grain and wheat for the country, and the fishing industry is similarly important. The Cinnabar Gym is headed up by Blaine Heslop, who also serves as the governor of the Prefecture, being perhaps the only really prominent citizen of the Kanto islands. The volcano at the centre of Cinnabar island is home to all kinds of fire pokémon, and the only known breeding ground for magmars. As such, most of the island is a protected area, which limits immigration.

Sevii Islands.
The Sevii Islands have only recently become a part of Kanto, ceding their independence in return for a greater share of Kantonine subsidies and unrestricted trade with the mainland. The Seviis are renowned for the unusual strength of their pokémon. They do not have a gym, but they do have the Trainer Tower, in which challengers fight some of the best trainers from the islands, many of whom have themselves completed the gym circuit and taken part in the league. The governor of Sevii Prefecture is Lorelei Ducheyne, a member of the elite four. The majority of the Sevii economy comes from farming, fishing and tourism.

not sure weather this is strickly relevant or not, but this might be a useful reference for some things:

and I know everyone's probably seen it before, but still: 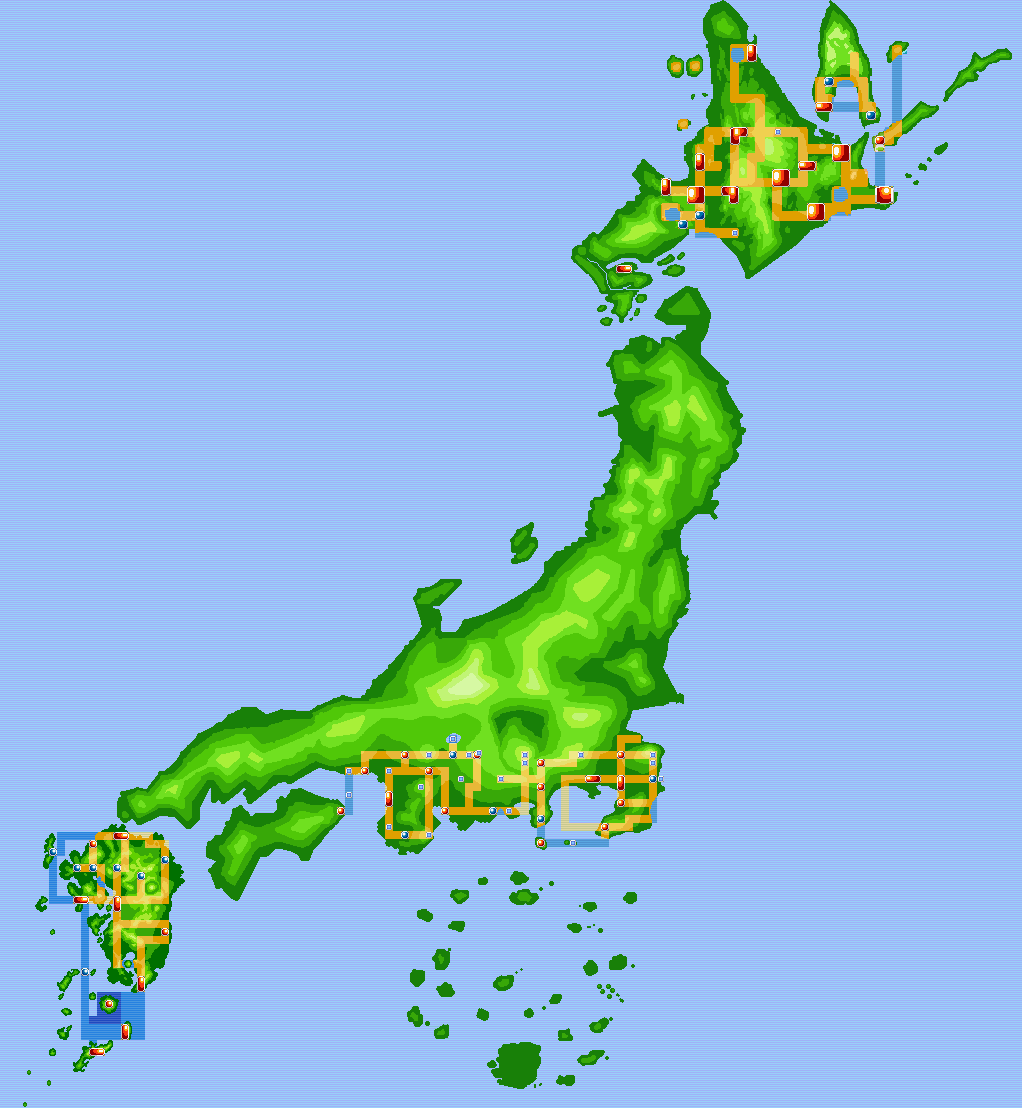 Back to The World