Your fav Units & the most hated?

my most loved units are
- NOD commando cyborg * 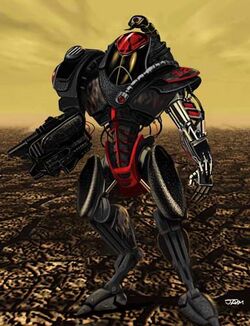 3 shots and everything has vanished.

what is your most beloved unit?

My most hated unit
- GDI - Juggernaut

Juggernaut is my fav! How could you hate it???

Juggernaut is my fav! How could you hate it???

It's the most effective weapon against my Commando Cyborg. I just see it, when it's already to late, and most of the times there are more than 3 J's firing on my CC or harvesters

I agree, banshee and cyborg commando rock! Most hated unit would prolly be the be the cyborg reaper....most useless unit ever
>.<

My fav is jumpjet : most hated: naval tiberium floater

I like Titans & Flying Disks; I hate the Mammoth MK2 & the Mastermind...

Favourite = nod cyborg, nod cyborg commander & ghost stalker. And I hate Mammoth MK2 (when I am not playing with it ofcourse ;D) & Juggernauts (I am a defensive player)

Why was my two most liked structures (Gap Gen, Stealth Gen) removed?

Total Annihilation is the only battle strategy.

Stealth Generator probably was due to lag.

Probably my fave unit would be Legionnaires. Zipping through maps and "instant killing" any ground unit.

squads of 4? I don't remember coding such groups so they should be multiple attack teams that were in the same area.

More than the lag, Stealth Generator kills AI gameplay so if Ares 0.3 includes attached anims feature I'll reenable it again but that building will suffer a small change, working like the stealth generator from TW (the own building can't be cloaked by this tech), this would help AI. I know that can be done in this way due to a MO video so I'll try to replicate the TW way.

Gap Generators don't produce lag its just a Shroud Maker... It's the Stealth Logic which generally are... it wasn't as prevalent in TS since it had smaller shps. But in RA2 its very evident when Cloaking/Decloaking take effect and hurt a PC's FPS...