December 5th Update: Mod of the Year and The Horse Lords First off, I'd just like to mention that Moddb's Mod of the Year contest is going on right now. If you'd like to support us in our effort to get some BFME mods well-recognized, you could head over to our page HERE and vote for us. Also consider voting for Phoenix Rising, another Revora mod that I work on from time to time

Anyways, on to the update!

Welcome to the first Rohan update! The next few updates will roll out the changes to the Horse-Lords of Middle-earth, and then, hopefully, we'll release version 0.75.

We'll kick off the next set of updates with the three new Rohan units we'll be introducing, as well as one structure. 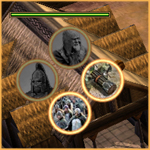 As in version 0.55, Rohan still has access to the Royal Guardsmen and Door-Wardens of Edoras. However, all of the new units are rather crowding the Archery Range and Stables. To that end, we're adding a Barracks to the faction (build animations graciously provided by Rob38). This structure now houses the new general units of the Rohan faction. Door Wardens are now built there at Rank 3. 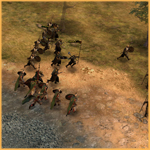 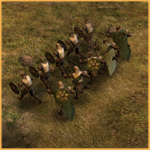 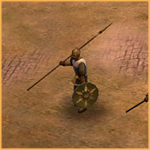 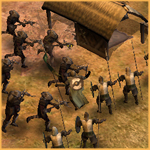 The Westfold Miltia are levied spearmen. They aren't that tough or versatile, but are reasonably inexpensive. If you're having a lot of trouble with enemy cavalry and Warg Riders, some Militia may be a good choice. They combo well with Peasants and Yeoman Archers. Westfolders are constructed at the Rank 1 Barracks, but first require you to purchase the Defenders of the Wold upgrade from the same structure. This enables Westfold Militia for purchase at any Barracks, and and Horsemen of the Mark at any Farm. 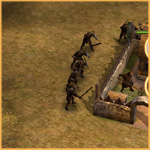 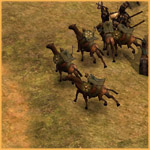 Let's take a look at the Horsemen of the Mark. This new unit is built at the Farm, and is effectively a drafted, mounted peasant. They aren't cheap, but build very quickly. They are relatively unique in that they have a limited combat time before they tire of combat and return to their homes. Therefore, once you've purchased Defenders of the Wold, any of your farms can defend itself by levying up a quick unit of cavalry, which will expire in 50 seconds. 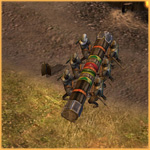 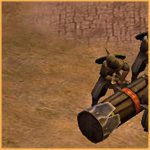 The last new unit that Rohan gets is the Rohirric Battering Ram. A basic siege weapon, it doesn't need much of a description - it is manned by a tough crew of Westfolders and can be used to batter down gates and small walls.

Awesome update, I'm a little concerned though that Rohan is getting too many non-mounted units. I absolutely love the Horsemen of the Mark though, reminds me of the mercenaries from AoM.

A fixed link for that second spearmen screenshot:

Awesome update, I'm a little concerned though that Rohan is getting too many non-mounted units.

With the new units, they still have less infantry/archer units than other good factions. And they're not really as strong as other infantry/archer units, so you'll still need to back them up with rohirrim when facing upgraded enemies. Don't worry, there's still much to be explained for rohan

The hoursemen of the mark are only available from farms. I think what Nertea meant to say was: once the defenders of the wetfold upgrade is bought, westfold militia can be built from any barracks, and horsemen of the mark from any farm

Fixed the image link and clarified that piece of text.

It looks really nice, I'm very pleased that I won't have to use peasants as much anymore.

Yay! I was eagerly awaiting the arrival of Rohan updates! Always liked this faction.

Yay! I was eagerly awaiting the arrival of Rohan updates! Always liked this faction.

But I can aks Haldir or Nertea.
I have smart on 3 aks.

3) The Rohan's weak units Peasants have only sword and spear but Westfold only spear. It is odd. Maybe Peasants be Eastfold like warrior?

Keep it up Nertea! TDH has always been my favorite bfme mod. It is great to see you continuously refining it!