5 replies to this topic

August Update
As I have been, currently are and will be for the foreseeable future too busy to pay much attention to modding I'm just giving a small update in regards to some small changes to the mod since the initial release.

To start up there is a new Soviet vehicle to replace the Scarab Drone.

The Dust Devil is the new Soviet utility vehicle. It has three turrets: the standard machine gun to take out infantry, a repair arm to maintain damaged vehicles and a rocket battery for none-homing missile barrages. Entering an Engineer into the unit obviously transforms the turret into the repair variant. ANY other infantry types will utilise the rocket pods for low grade siege warfare.

Next up is a new support power for the Allies, replacing the Celestial Airstrike.

The Equalizer is a missile launched from the Science Lab. Upon impact it releases a short range electro-magnetic pulse, disabling most electronic units and structures. As named this can be used to equalize the battlefield if things turn bad or be used to disable enemy defenses during an assault. Be careful however as the weapon will not distinguish between friends or foes!

A change has been made to basic defences, they each now have an anti-tank weapon. The Pillbox uses a light cannon against armour while the Sentry Gun is loaded with armour-piercing rounds.

Multiplayer countries are also being adjusted, here's the new roster.

So that's it for screens. Many balance changes have been made, several units replaced/added and the mod made overall a nicer experience. As was previously posted on ModDB, here are two wallpapers in 1680x1050 and 1920x1080. 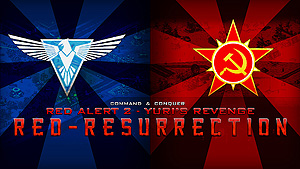 . Oh, and I guess basic defences are more useful now.

I like what I'm seeing here. The Dust Devil concept is nice and the basic defenses having anti-tank sounds also useful. Makes me looking forward to the next version.

Hmm I guess this could work. Although I was expecting for you to call the Pillbox's Version being a Grenade instead of a Cannon. It even has Line Trail which makes it feel more of a grenade being thrown for me.

Yeah given it fly in an arc it gives feel of an grenade but direct firing has its own issues and trail can be simply smoke trail of the cannon shell as trail of an actual grenade make less sense unless we're talking some RPG.

Personally they're just for visibility.