On July 15th 1944, the RLM submitted Proposal 226/II to Germany's aircraft manufacturers. This "Emergency Fighter Competition" specified the following requirements (although these were later to change several times) for the second-generation of jet-powered fighters for the Third Reich:

The Blohm & Voss entry was the BV P.212.03. The wings were swept back at 40 degrees and featured pronounced dihedral. Both downturned wingtips and small fins and rudders were designed for the BV P.212.03. In addition, the wings were designed to be built out of either wood, steel or aluminum, although the first versions were to have the usual stressed skin steel construction. One interesting feature that Blohm & Voss designer Dr. Vogt used for many of his projects (BV P.209.01, P.210.01, P.211) that was also included in the BV P.212.03 design was the bent steel air intake duct that was also used as a fuselage inner load-bearing structure. A pressurized cockpit was designed for the pilot, and the armament load could be varied greatly. 2700 liters (713 gallons) of fuel could be carried, 2100 liters internally in the wings and fuselage and 300 liters in two under wing drop tanks, giving an endurance of close to four hours. Although the Focke-Wulf Ta 183 was chosen for production in late February, three prototypes were ordered and construction began in May 1945, after exhaustive windtunnel and structural tests. The first aircraft was to make its first flight in August and the second aircraft was to be ready by September 1945 September 1945. Of course, the end of the war ended all construction. 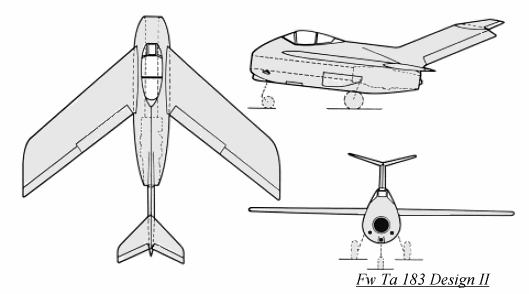 The Ta 183 had a short, squat fuselage with the air intake passing under the cockpit and proceeding to the rear where the single He S 011 turbojet was located, although the first three prototypes were to be powered by Jumo 004B jet engines. A provision was made in the early studies for the aircraft to be equipped with a 1000 kg (2205 lbs) thrust rocket engine to assist interception duties, with the fuel for a 200 second rocket burn being located in underwing drop tanks. The wings were very thin, swept back at 40 degrees and were mounted in the mid-fuselage position. A tapered main wing spar constructed of two duraluminum I-beams with steel flanges formed a torque box, with the attachment at the fuselage consisting of a single bolt. The wing structure was completed by adding bonded wooden ribs with a plywood covering. Each wing panel contained six fuel cells totaling 1565 liters (345 gallons). The huge fin was swept back at 60 degrees, with the tailplane mounted on the top of the fin. The tailplane also exhibited considerable dihedral. Wing elevons and the rudder provided control, the tailplane control surfaces only being used for trimming. The flaps and landing gear were operated hydraulically. The pilot sat in a pressurized cockpit with a bubble canopy which provided excellent all-around vision. Four MK 108 30mm cannon was envisioned for the production Ta 183 armament, also a bomb load of 500 kg (1100 lbs) could be carried.

On Febuary 27 and 28, 1945, the Emergency Fighter Competition conference was held by the OKL (High Command of the Luftwaffe), and the Ta 183 was chosen to be developed and produced. There were to be sixteen Versuchs (experimental test series) aircraft: the Ta 183 V1-V3 to be powered by the Jumo 004B turbojet, pending delivery of the He S 011 jet engine, the Ta 183 V4-V14 as 0-series preproduction aircraft and V15-V16 as static test aircraft. The maiden flight of the first aircraft was planned for May/June of 1945, but no examples of the Ta 183 were completed because on April 8, 1945 British troops captured the Focke-Wulf facilities.

After the war, the Ta 183 story continued. The Soviets found a complete set of plans for the Ta 183 in Berlin at the RLM offices, and began construction of six prototypes in March 1946 by the MIG design bureau. On July 2, 1947, the first Soviet-built Ta 183 took to the air powered by a British Rolls-Royce "Nene" turbojet. They discovered that the original Ta 183 design needed either automatic leading edge slots or wing boundry layer fences to alleviate low-speed stalling. Also, as a compromise between high-speed and low-speed flying, the horizontal stabilizer was moved approximately one-third down from the top of the vertical tail. The modified Ta 183 first flew on December 30, 1947 and in May 1948 was ordered into production as the MIG 15.

The Heinkel He P.1078C had a short, squat fuselage (all metal construction), which contained the single He S 011 jet engine. This engine was fed by a squarish air intake in the fuselage nose, which then led to the engine via a flattened air duct. The wings were constructed of wood (to save weight and resources) and contained the entire fuel supply of 1450 liters (383 gallons) and were unprotected. Featuring a large dihedral, the P.1078C's wings were swept back at 40 degrees and its wing tips were angled downwards. The downward turned wing tips were chosen because it was felt that they would have less influence on the critical Mach number of the wing and have better roll damping than vertical fins. The main landing gear retracted forwards into the fuselage sides, and the nose gear retracted to the rear and rotated 90 degrees in order to lay flat beneath the air duct. A single Heinkel Hirth He S 011 turbojet was mounted in the fuselage rear, and provided 1300 kg (2866 lbs) of thrust. Planned armament at this time consisted of two MK 108 30mm cannon with 100 rounds for each gun, placed on each side of the fuselage below the cockpit. After all aircraft designs were submitted for the Jägernotprogram (Emergency Fighter Program), some criticism was made of the Heinkel He P.1078C design, mainly concern was expressed about the unprotected fuel tanks in the wings and the short fuselage shape, which in their opinion made it ill-suited for high speeds. Misgivings were also expressed about the wing shape. Heinkel dropped all work on the P.1078C after the February 27-28, 1945 meeting. A decision was made to concentrate more on the Fw Ta 183, Ju EF128, Me P.1110 and Bv P.212 designs.

The Ju EF-128 had air intakes at the fuselage sides to divert the boundry-layer air flow to a vent outlet aft of the cockpit fairing. The wings were of wooden construction, swept back 45 degrees and had two small vertical fins and rudders on the wing trailing edges. 540 liters (143 gallons) of fuel were contained in the wings, and a further 1025 liters (271 gallons) were contained in a fuselage tank located just behind the cockpit. A pressurized cockpit was provided with an ejector seat and armor (protection from 12.7 mm rounds from the front, and 20 mm rounds from the rear). Power was supplied by a Heinkel-Hirth HeS 011 jet engine, and two MK 108 30 mm cannon were installed in the sides of the fuselage nose with 100 rounds each, with a provision for two more. Good results were obtained with a completed wind tunnel model, and a mock-up fuselage with an HeS 011 jet was built for tests in which it was to be mounted above a Ju 88. An additional night fighter/all-weather fighter with a lengthened fuselage and room for a second crew member was also in the design phase, but neither project was completed due to the war's end. 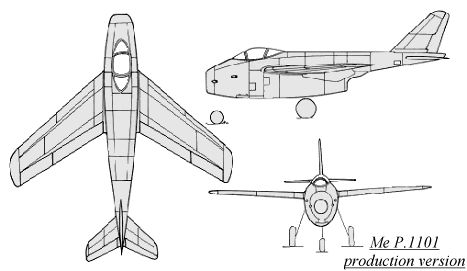 The fuselage was constructed out of duralumin, with space provided beneath the cockpit for the air duct. Located behind the cockpit and above the engine was the fuel supply of 1000 liters (220 gallons). The rear fuselage tapered down to a cone, where the radio equipment, oxygen equipment, directional control and master compass were mounted. The underside of the rear fuselage was covered over with sheet steel, for protection from the heat of the jet exhaust. Although a Jumo 004B jet engine was planned for the first prototype, the more powerful He S 011 could be added on later versions with a minimum of fuss. The wing was basically the same as the Messerschmitt Me 262 wing from the engine (rib 7) to the end cap (rib 21), including the Me 262's aileron and leading edge slats. A second wing assembly was delivered in February 1945, in which the leading edge slots had been enlarged from 13% to 20% of the wing chord. The wing covered in plywood, and could be adjusted on the ground at 35, 40 or 45 degrees of sweepback. Both the vertical and horizontal tails were constructed of wood, and the rudder could be deflected 20 degrees. Also under design was a T-tail unit and a V-tail also. The undercarriage was of a tricycle arrangement. The nose wheel retracted to the rear and was steerable. The main gear retracted to the front, and included brakes. The cockpit was located in the nose, with a bubble canopy giving good vision all around. The canopy was kept clear by warm air which could be drawn from the engine. Cockpit pressurization was to be incorporated in the production model, as was either two or four MK 108 30mm cannon. The production model was also to fitted with cockpit armor, and up to four underwing X-4 air-to-air missiles could be carried

The Me P.1101 prototype was about 80% complete when the Oberammergau complex was discovered by American troops on April 29, 1945, a few days before the war's end. The Me P.1101 prototype was shipped to the Bell Aircraft Works in Buffalo, New York in August 1948. Damage was sustained when the aircraft fell off a freight car, which in effect ruled out any possibility for flight testing. The P.1101 was fitted with an Allison J-35 jet engine, and mock-up weapons (6 x Mg 151 and 4 x MK 108 cannon) were pasted on the fuselage sides. Bell used the Me P.1101 as the basis for the X-5, during which individual parts of the P.1101 were used for static testing. Sometime in the early 1950s, the remainder of the Messerschmitt Me P.1101 V1 was sent to the scrap yard, thus ending this unique and distinctive aircraft's history.

Vote for your favourite one!

Rumor has it that I'm Awesome.

i voted for the B&V also, but the Junkers was a close second

I picked the Messerschmitt!

Margret Thatcher - Fenring's the one for me

I guess the Messerschmitt Me-P.1101 looks the best, but i'm not that fond of any of the designs :|

"We are the Borg. Existence as you know it is over. We will add your biological and technological distinctiveness to our own. Resistance is futile."
Back to D-Day Analysis