The largest and the most spectacular antiaircraft cannon of the war. Its effects were devastating against its targets. Its weight prevented its assignment to the land units like the 88mm Flak and it was specialized in the static defense of the Reich. They had the opportunity to engage land targets with a formidable efficiency though, when the allies began to progress on German soil.
The development had started as early as 1936 but the first examples were deployed only in 1941. The aiming and the reload was electrically driven. In August of 1944, there were 450 such cannons available, of which 200 fitted on railroad carriages (the only practical way to make them mobile). They were a little weak against targets at very high altitude. The weapon was very heavy, but gave a devastating firepower against aircraft. 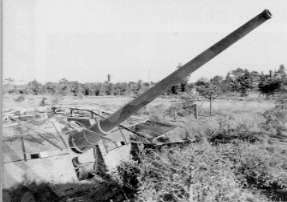 Type 5 is the biggest AA gun that Japan has developed. Two guns of Type 5 were deployed at Kugayama in the suburbs of Tokyo in August, 1945, just before the end of WWII. They brought down two B-29s by one engagement. However, they had no chance to fire after that, because B-29 avoided to fly over Kugayama.

Ouch...wouldn't want to be on their recieving end...
Practically AA Grand cannons...

No they make Grand cannons look like water pistols...! They can even be used as artillery weapons too if needed :!:

Our do it this way :

High Tech -> Super Defenses (Super AA/Super AT) Buildlimited ? (or else you get heavy turtles camping in a base that's flanked by a zillion super defenses...

Maybe make every nation have a different Super Defense, like germany Super AT, but Japan Super AA, if historically correct ofcourse...

I would not however make the grand cannon thing like the ra2 one, what a misery I've seen online, especially on that crap of Tour Of Egypt, I hope DDay or reconfigures it or just keeps the Type 5 as AA

as long as its artil and aa, you better only get one...
Besides, your base it technically just that, a base, not the capital city or something, Building this kind of gun should take awhile too...

A consideration about these structures can be done if some superweapons aren't possible o are buggy. Instead of them a super defence structure can be a suitable idea

BTW isn't it possible to let Japan have something with kamikaze planes ?

I know the animation would screw up when it would be 'unit', but what if you made the kamikaze plane a missile, it would go down as it should and explode upon the building.

So a missile which looks like a plane, can that be done ?

Can they be called off-map ? Spawned in other words, as they should be incontrollable, I think it would fit best as a sidebar weapon (super) or as a weapon assigned to an 'Officer' of some kind, which has no other weapon, maybe a handgun and his airstrike (like Boris, but now they just crash into the building).

The Yokosuka MXY7 Ohka was chosen as Japanese superweapon. It was a suicide rocket. http://www.rafmuseum...a-mxy7-ohka.htm
http://www.warbirdsr...IJARG/ohka.html

Kamikaze's have hardly anything to do with AA-guns. I suggest we get back to topic and if there are are questions about kamikaze's create a new topic.

well , you just know you have to have those guns in a mission if you do a SP campaign.

work is sacred...so don't go near it.
Back to D-Day Analysis