Show off your home town


81 replies to this topic

I'm always interested in reading about and seeing pictures from different parts of the world besides all the big, well-known places.

Myself, I live in Nijmegen, the (currently contested) oldest city of the Netherlands. It is situated on a flat hill overlooking the Waal river. The Bataven, a Germanic tribe, first settled here in the Bronze Age, and the hill was later turned into a Roman outpost (Noviomagus) from which legions crossed into Germanic territory. Before the outpost was commissioned, Julius Caesar himself stood on the hill and looked over unconquered lands. Once Rome collapsed, the great outpost was left behind until Charlemagne put it back on the map by erecting a fortress where he dwelt on occasion. There have been many ancient findings around here, many of which can be viewed in the Valkhof museum. There's a number of medieval ruins dotted throughout the city center, as well as a surprising amount of intact medieval architecture. There's a beautiful park called the Kronenburger Park (my father designed the water fountain) and a lively artistic scene. It's a wonderful place to live.

Tell me about where you live.

Great idea for a topic.

Well where I'm currently living and was born is York, England. It had pre-Roman settlement thousands of years before their arrival but the modern city can be attributed to the founding of a Roman fort in 71BC, called Eboracum, becoming the capital of northern Britain within the Roman Empire and was used several times by Emperor's as a base for their campaigns. In 866 the Danish conquered the city and renamed it to Jorvik, which later became York after the unification of England. Since then well there's obviously a lot of history, it was at times an economic and political center but I believe during the industrial revolution governers didn't want the city to become industrialized and so since then it's had very little advancement. The most prominent feature is probably the Minster, as seen in the aerial shot. I can actually see it from this edge of town, which is nice. The lack of verticality is more refreshing than in big cities. There are still some Roman walls remaining, the remnants of a small castle, a fort where Jews were massacred and a famously old street remaining from 1300.

Unfortunately there aren't many opportunities which is why I moved to London last year and intend to get back there soon.

Well, yeah, good topic chosen. I myself live in the middle of nowhere in a near-400 year old converted barn house, but it's literally the only thing for two miles around. Closest place of interest is Lancaster City, UK, famous for being England's leading slave trafficking port and the Witch-hunt trials, for which last year was the 400th anniversary. Anyway, the prominent sites are ancient buildings, such as the Castle (first below), the Cathedral, and the Ashton Memorial/Folly (second below). Aside from this, nigh on all the buildings in central Lancaster bear stone-walled façades, making the entire area appear rather middle-aged but for the vast quantities of people around. 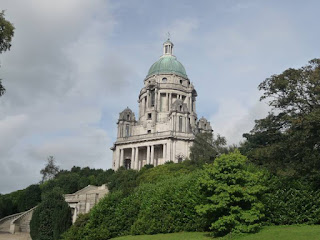 I live in Toowoomba it's a city in Queensland which is very temperate in a state that's usually associated with tropical weather.

The city is nearly 200 and it's located 691m above sea level and is mostly surrounded by farmland.

Geoffery Rush was born here and moved when he was 2 which is probably the most notable thing about Toowoomba.

Australia really should start building castles to help with tourism in 400 years.

Toowoomba! I was there during the 2011 flooding. ;D

And here is a photo that I took of Perth (I'm quite a city boy, although I am living in the country at the moment). ;p

As a city: Perth has three skyscrapers, five train lines and three freeways. Culturally we are of little importance to the rest of the world and are like a miniature Sydney. It is very isolated and small. North part of Western Australia there is a lot of mining done by companies in China, Perth benefits a little from this and it provides a lot of jobs. The workers live in Perth for part of the year and fly out every month to the outback to mine. The workers are usually people who have no families and people who should be looking after their families instead of mining. ;p

Here is a daytime panorama of Perth. http://upload.wikime..._Kings_Park.jpg

Have you been to My Big Empty Field, Indiana?  It also suffered during the 2011 flooding.

I walked home during that downfall up hill, or should I say waded home.

Rad, I was camped in the showgrounds during that time, in a inflatable pool full of jelly. ;p

Also, I will edit under my original picture a description of Perth. I really like this topic. ;D

Pasy - I have never been overseas. ;(

This is almost exactly the place I live. On the right side, the fifth house from where this pic was taken and then it's not almost.

Congrats on 1k, Graion - but how on earth do you pronounce that?

It's Iska-Saint-George in English form.

I see your desolate field Pasi, and I raise you with vikings.

More seriously, we got my valley:

a few months back now, we had a group event where we moved a wood-heated bathtub down to the local docks, partially to make a point, partially to party. I live about 600m further up town. Never been on any of the mountains, I guess growing up beneath them made me apathic to them.

Thats a hell of a view Duke!

Duke, you would be surprised how convincing those Vikings are as crazy Amish people, and looking very closely at my desolate field, you can spot one.  Let's... play... the picture game... find the Amish guy!

And Dil, I can't say I've ever been to SajhlkdslkjsdlsdlksdkjbsdjkdjkdsjkdjklSASDH.  I hear it's nice there when the sun is shining and no sadness.

Pasy - I have never been overseas. ;(

Oh, it's not over-seas, it's in The America.

Matt you weren't one of those idiots that had the inflatable raft in the water near the library over Easterfest were you?

Matt you weren't one of those idiots that had the inflatable raft in the water near the library over Easterfest were you?

Nah, I was there in January. ;p

I feel compelled to prevent this topic from dying because we all live in such interesting places.

I'm from a suburb of Phoenix, capital of the state of Arizona. The area has been inhabited for thousands of years by Native Americans. In fact, much of our canal system was built out of canals that were in most cases built over a millennia ago by the Hohokam. They left us some gifts among the ruins of their society, and all we had to do is refurbish them. Jack Swilling, some ex-Confederate soldier from the American Civil War, stood at the head of that effort and is credited with founding Phoenix as a result. He had already done some mining and colonizing in the northern half of Arizona, but decided to try his luck a little more to the south. His whole venture was only successful because of the canals.

People started moving to Phoenix, but the name wasn't set in stone for a few more years to come. In fact, it was actually known as 'Pumpkinville' at one point of time because of the large pumpkins we used to grow. The early settlers finally decided that naming a city after a giant and ugly squash was absolutely retarded and decided on the name 'Phoenix' - chosen because the city grew from the ashes of the Hohokam's ruins. The city grew, and today, about 4 million people live here - including me for about half the year. Our (nonexistent) culture, though, leaves something to be desired. There's nothing really defining about us. We let our cowboy past die decades ago - that whole culture, along with 'bigger,' belongs to Texas. Most people here are immigrants, either from another state or from another country - 62% of the population, to be more precise. Also, an entire 15% of the population can't speak a lick of English. Street signs downtown reflect that, especially on the south side. Furthermore, every other culinary establishment serves Tex-Mex. The only thing I can think of that we do have is what we call 'snowbirds.' Essentially, they're well-to-do retirees who purchase winter residences in Arizona and reside here from around October until mid-April. Their name is derived from their migratory behavior - they flee the 45*C+ scalding Arizona heat and sun for the temperate climate of their northern residences during the summer and flee the frigid cold of those same places in the winter for Arizona's mild winters.

Phoenix does have one redeeming quality - its unique sunsets. We get something as pretty as the one pictured below almost every evening. 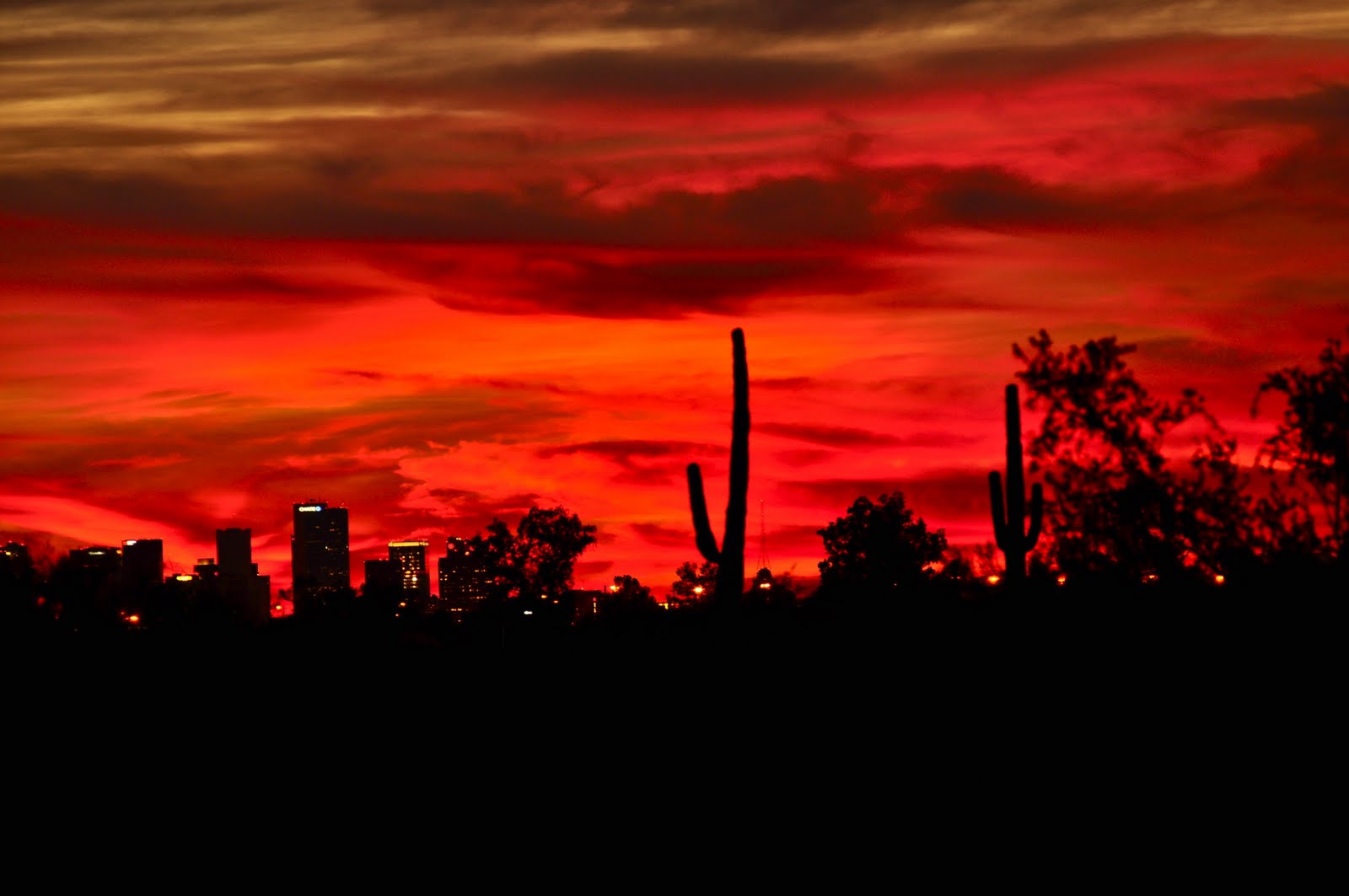 Back to Open Topic