It's been eight months since the last news post & nearly a year since I posted anything new. During that time I've had to deal with some difficult personal issues which has ended with me moving to a different country with only what I could fit in a suitcase. Nothing can stop me from modding tho, so armed with a backup of D-day's files on a USB stick I've soldiered on.

Now on to some actual D-day news! As I have mentioned a few times over the past year the next version of D-day will focus on adding Japan as a new side, I'm happy to report that they are now nearing completion. Over the next two weeks I'll be posting all of the Japanese units completed so far & to start things off here are their cargo & transport units. 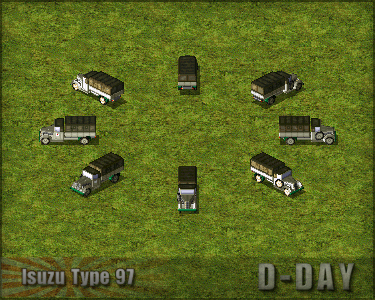 Type 97 was based on an Isuzu commercial truck design, it shared many common parts with the Isuzu Type 94 Truck. Type 97 was one of the most common trucks used by the IJA during World War II.

In D-day the Isuzu Type 97 is used as the Japanese supply vehicle in Pre/Early-War. 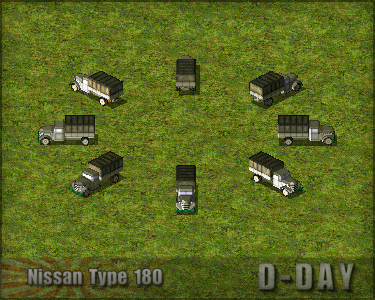 Nissans second mass produced military truck, heavily based on a 1937 Chevrolet truck design. It went though several evolutions during the course of the war with many parts being simplified and changed from metal to wood in an effort to save materials. It proved to be quite a successful design and was produced until the early 50's.

In D-day the Nissan Type 180 is used as the Japanese supply vehicle in Mid/Late-War. 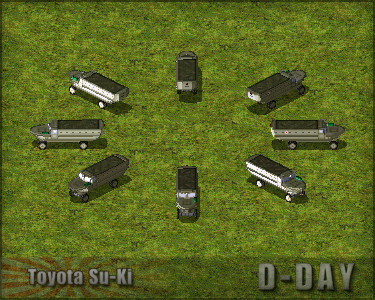 The Su-Ki was an amphibious cargo truck based on the Toyota To-Ki. It was used by IJA forces to transport cargo around islands in the Pacific.

In D-day the Nissan Type 180 is used as the Japanese supply vehicle in Post-War. 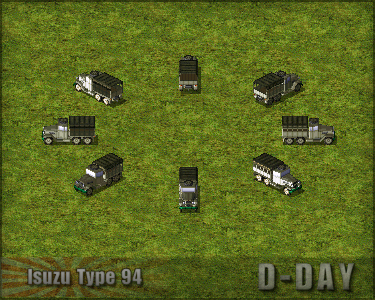 Before World War II the IJA used commercial trucks which proved to be unsuitable for the hardships of military service. So seeking a more robust vehicle the IJA commissioned Isuzu to design a 6 wheeled truck specifically for military needs. The Type 94 design went on to become the standard military truck of Japan & more were produced then any other Japanese truck during World War II.

In D-day the Isuzu Type 94 is used as the Japanese transport in Pre/Early-War. 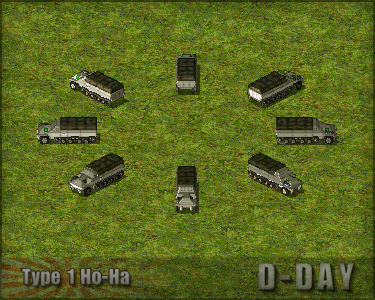 Development of the Ho-Ha started in 1941 with prototypes being built soon after. The army preferred to use fast trucks over slower armored carriers though, so interest in the project was lost. By 1944 the need for better infantry protection was greater than that of speed so mass production of the Ho-Ha started, the worsening war situation and the lack of raw materials meant that only a limited amount were produced before the war ended.

In D-day the Type 1 Ho-Ha is used as the Japanese transport in Mid/Late/Post-War. 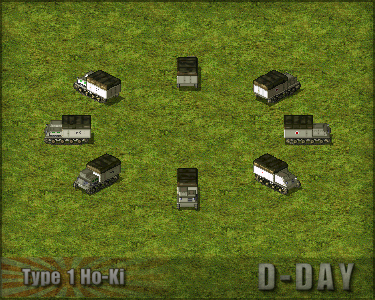 The Type 1 Ho-Ki was designed as a fully tracked armored carrier which could also be used as a prime mover for towing artillery and field guns. It however suffered from the same difficulties as the Type 1 Ho-Ha and only a limited number were built, many of which were lost at sea when the ship transporting them to the Philippines was sunk.

In D-day the Type 1 Ho-Ki is used as the Japanese transport in Total-War. 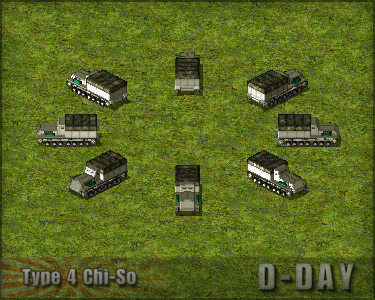 Designed as an armored personnel carrier and prime mover in the closing stages of World War II, only a few were built before the war ended.

In D-day the Type 4 Chi-So is used as the Japanese construction vehicle in all time frames.


Lastly I have to unfortunately announce that the next version of D-day will not be release on D-day's anniversary this June 6th like the previous years. I have something else planned to mark the occasion tho which I hope will make up for it.

Life is not easy, but wish you all fine, Miggy

And, is that boat truck to be really amphibious in game? If so it would give a great advantage in scattered islands maps! Hope it to be so because that would quite fit the Jap faction flavor!

Yes the Toyota Su-Ki is amphibious.

Also tagged with one or more of these keywords: japan, d-day, trucks