This is part eight of the Japanese units and today we leave the ground below and take off with their fighter planes. 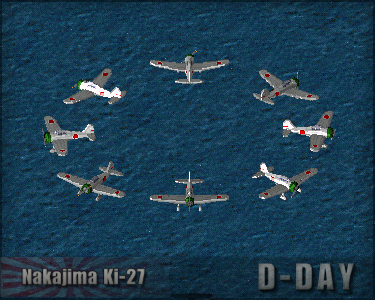 The Nakajima Ki-27 was one of Japan's first production monoplanes and was the airforce's primary fighter plane during the beginning of world war 2. In 1935 the Japanese Army started a competition between Nakajima, Mitsubishi and Kawasaki for a new fighter to replace the Kawasaki Ki-10 biplane. The Nakajima Ki-27 even though it was slower than the other planes won the competition because of its superior maneuverability. The Ki-27 was soon out classed by newer enemy aircraft and was soon relegated to training duties. However during the last year of the war the Japanese were using every plane that could fly and the Ki-27 was fitted with explosives and used in Kamikaze missions. 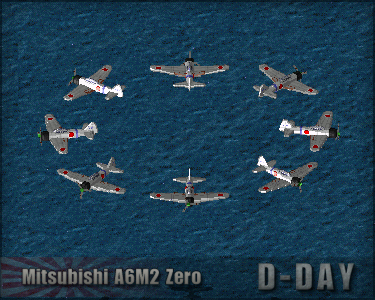 The most famous Japanese fighter of world war 2 the A6M Zero was Japan's primary carrier based fighter plane during the early stages of the war. When introduced in 1940 it was considered the best carrier plane in the world, the A6M2 variant was the first major production model with over 1,500 being built. Their first use in combat was in China where 13 A6M2 Zeros shot down 27 Polikarpov I-15 and I-16 without any losses. They continued to dominate the air during the early stages of the Pacific war. It wasn't until July 1942 when a crash landed but intact A6M2 Zero was found on Akutan Island in Alaska that the Americans were able to study the Zero. From this captured plane the Americans were able to devise tactics to deal with the Zero and along with the introduction of new American fighters were able to end the Zero's dominance in the Pacific. 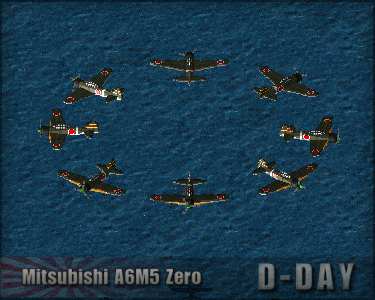 The A6M5 Zero was the last and most produced version of the Zero with over 2,200 built. It was designed with a new shorter and thicker wings to increase diving speeds and a new exhaust system that improved the engine's output. However these improvements weren't enough for the Zero to regain superiority over the newer American fighters such as the F6F Hellcat and the Zero struggled on until the end of the war. 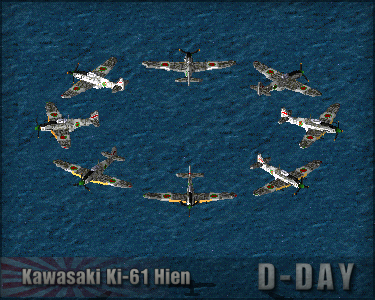 The Ki-61 Hien was the only Japanese production fighter plane to use an inline engine, it was also the first fighter to feature an armoured cockpit and self sealing fuel tanks as standard. In 1939 the Japanese acquired a licence to built the German Daimler-Benz DB 601 engine, the same engine was also used in the Messerschmitt Bf 109 and Macchi C.202. Which caused much confusion as when American pilots first encountered the Ki-61 during the Doolittle Raid in 1942 they reported back that it was a German aircraft. The Ki-61 fought successfully during the first part of the war outmatching the American P-40 Warhawk, however its inline engine was very complex and difficult to maintain, often more planes were lost to engine failures then to enemy action. 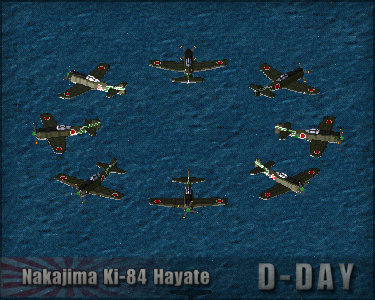 The Ki-84 Hayate was considered to be the best Japanese production fighter of world war 2, it was a match for any Allied fighter of the time and was one of the few Japanese aircraft that could engage the B-29 Superfortress. The Ki-84 Hayate's supremacy came from its Nakajima Ha-45 radial engine which used water injection along with a supercharger to produce 2,000 horse power. It was first used during the battle of Leytein in October 1944 and then went on to fight in nearly every battle until the end of the war. 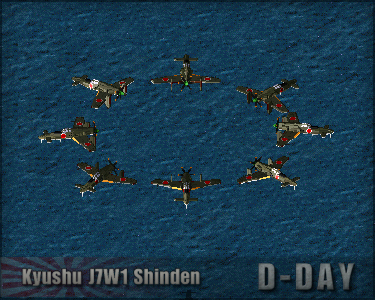 The J7W1 Shinden was an experimental canard fighter plane that was designed to help counter the American B-29 Superfortress bombers that were devastating Japan's cities. This unique aircraft was proposed by Lieutenant Commander Masayoshi Tsuruno who believed that the canard layout would result in an highly maneuverable and powerful fighter. The basic design was tested with the Yokosuka MXY6 glider at the end of 1943 and showed the feasibility of the canard configuration. Work then started on the prototype of the full combat aircraft which was completed in April 1945. The Shinden was ordered into production with an expected 150 a month to be built at two different factories, however only two prototypes were built before the war ended. One of the prototypes was confiscated by the Americans after the war and sent back to the United states for testing, in the 1960s it was given to the Smithsonian Museum and has been in storage since. 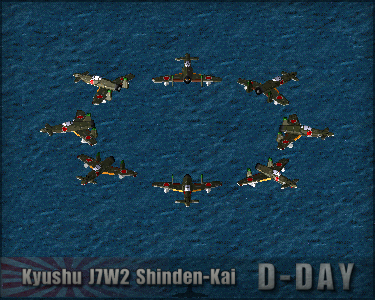 The J7W2 Shinden-Kai was a planned upgrade of the J7W1 Shinden, it would have replaced the Mitsubishi Ha-43 propeller engine with a Ne-130 axial turbojet. The use of a jet engine in the Shinden was considered since the early planning stages but development of Japan's first jet engine was proceeding slowly so it was decided to first fit the aircraft with a propeller engine and then later change to the turbojet once the Ne-130 was available. The war ended before the propeller powder Shinden was finished and no jet version was ever built.

Tomorrow will feature the Japanese ground attack and bomber aircraft.

Is there anyone also wonders why Shinden's cockpit is so backward in the fuselage? Its nose should have nothing but 4 cannons, and most fighters that have their cockpit placed before engine, have a smaller nose compared to Shinden.

And, you must have noticed that, in the above list, Zero is a navy carrier based fighter, while all others are land base army fighter.And the Zero A6M5 and Ki-61 may overlap too much in time frame.

So, ever considered to spit it into sub-factions as US Army and US Navy?

That may make sense because, as you may know, IJN and IJA view each other as most hated only next to their common enemy in the Allied forces, actuall IJN build tanks and IJA had a air carrier and submarines of its own---if WW2 didn't broke out they may fight each other some day

The Zero is to iconic to be left out & carriers use attack aircraft and not fighters, so it's a buildable fighter instead. The A6M5 and Ki-61 are only available in total-war the Nakajima Ki-43 Hayabusa will be used as the Japanese mid-war fighter, I just haven't made it yet.

I have looked into making IJA & IJN sub sides but each of them just don't have have enough unit types to fill two separate unit lists. The JSDF will appear as a post-war sub side in the future though.

But Ki-43 is essentially of same level with Zero, perform pretty alike Zero, rather than a reasonable upgrade as the time frame suggests.

However if I were you, I'd make both navy fighter and army fighter buildale in each time frame, and give the navy fighter some specially advantage over sea but also make it more costy.

Perhaps let the carriers to offer a bonus to navy fighters, as Thor Gunship does in MO 3.0? I think that would be interesting, if carriers can swith modes between support figters and launch attackers, and it take some time to swith, then you get the possibility of Midway: Caught by your enemy while swithing modes!

Also tagged with one or more of these keywords: japan, d-day, fighter plane