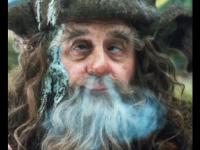 malvack hasn't added any friends yet.

So basically, I have this idea for Drogoth I want to do. Currently, I have given Drogoth this ability to summon smaller, less powerful version of himself (3 mini Drogoths max). Now, what I want to do is for Drogoth to gain his abilities not by leveling up, but by the number of mini Drogoths next to him (so, 1 mini-D unlocks wing blast, 2 mD unlock fire flight, 3 mD unlock incinerate). To implement it, I wanted to use a combination of LargeGroupBonusUpdate and some vanilla updates I'm not using. This approach has helped me with giving upgrades to the goblins when in large numbers and so forth, however, it appears it doesn't affect good ol' Drogoth. I don't know if it's because he is a hero as opposed to a horde, or if it's because he is a flying unit; whatever the case, I can't make him upgrade through the number of mini-Drogoths as I wanted to. I'll leave the pertinent code here, so to clarify what I'm doing.

ScriptEvent.xml - New Event Names that I guess pretty much everyone know, still

Yeah, that's pretty much it. Hope someone has more experience in this topic because, as for now, I don't know what else to do.

I was trying to use wb with my mod units and I got an exception that prevents me of using wb. What I wanted to do was to edit the ai purchasing routines of the spellbook powers. I created the .big file with the data folder and put it in the rotwk directory. I did this with every faction, except the goblins (I hadn't finished their new powers at that point) and it worked perfectly. Now that I have the goblins' new spellbook powers, wb crashes after the loading phase and raises an exception. I don't know why is this happening since my mod works using the -mod command and also works when putting the same .big file in the rotwk directory (minus the asset.dat). Point is, the mod is working, all the new abilities work as they should, and the .big file doesn't seem to have any issues. My question is: what is raising the exception? What does usually crashes wb but does not crash the mod? If anyone knows  this, or have some experience with this issue, please give me some pointers. The only thread that I found (and commented in) that talked about this issue was https://forums.revor...cess-violation/ but I can't figure out an answer from this.

The exception I get is the following:

Hi everyone! Currently I'm struggling with two issues, hope someone can give me some directions here.

First problem relates to the Angmar Wolves. I wanted to give them a heavier punch than usual, so I figured to give them a radial weapon (to each wolf in the pack). However, I also wanted that this radius also affected the allies, that is to say, each wolf attack would damage both allies and enemies, except from wolves within the pack. Then, I wanted to upgrade the weapon of the wolves via the spiked collars upgrade so that they could only damage enemies once upgraded. I thought this would be easy, but somehow my code isn't working, I don't know what I'm missing, but when I first tested it it worked, but the following playthroughs it didn't. It does have the AoE damage on enemies, but it won't hurt allies.

The other problem I have is something I don't have high hopes to know the answer of, but might as well ask. Sometimes when I'm playing the CP drops until it hit zero and then, the limit dissapears (i.e., I may have 250/1000 then 250/800 then 250/300 then 250/0 and finally just 250. Suffice to say that, when this happens I can't build more units. Even worse, if I build farms, the CP won't be affected, it stays gone. Definitely the worst part is that is near impossible to track what triggers this issue, as it as random as it gets. The most I can figure out is that this happens after I buy one hero I made, however, his abilities does not affect CPs in any way, shape, or form. So I restrain to build him, but then again, I'm not sure if he is the one that makes this issue happen or if it is just a coincidence.

If anyone can help me with either of these issues, I'll appreciate it.