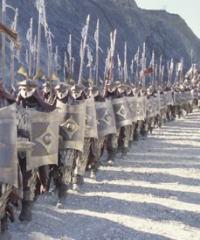 In Topic: Buildup animations and upgrades

Thank you for the detailed explanation.

I will give it a try.

I will let you know if it worked

So I first decided to get my buildup animations to work before focusing on upgrades.

I tried to use the second part of your code but it did not work.

you have said. I used the second part because at the moment my building

has no snow texture so its only the standart model.

Ingame the animations did not work. The building stayed under ground after

construction. In W3D viewer the animations worked so its most certainly the code

which is incorrect. My game did however not crash at the start.

second part is the normal part of the animations? I am talking about the buildups code

I am not sure if this works but you could try to add this line in your code.

RandomTexture = then put the name of your textures here.

Here is an example of how it could work.

If you have 33 different textures you must add 33 times the above mentioned code to your units ini.

I hope I was able to help you out.

I got it fixed on the same day of my post

Well, the thing is that this version was given to me for free.

I cannot go and pay alot of money

way. I was just wondering if the older version also had these features.

But thank you for your answer.

In Topic: Making an AI work on a map

I managed to open the bse. file.

Thank you for your help.

I just have one more question.

It is however not related to the bse file.

I had noticed that I can no longer zoom

I noticed this after I added Rohan to the playertemplate.

Did anyone actually know that Rohan is still as a playable

faction in the Rise of the Witch King?

Anyway after I added Rohan to

the game I could not zoom out anymore. I disabled the code in the playertemplate

but it did not solve the problem.