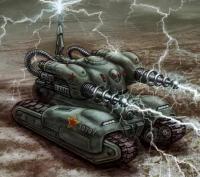 TeslaCruiser hasn't added any friends yet.

SC will be a niche sub-faction anyhow so how about this: make them actually capable of spam stuff
One option is to remove that shitty plane support attack and exchange it with a reinforcement mechanic unlocked via epsilon airfield
Another option is to add the option of building one "warfactory" from armory tab (limit 1, maybe 2)

But these changes need to affect somehow the early game since there is when SC is supposed to take advantage, in other words, we need more t1-t2 SC units in the field and in the 5 minutes window
The boring way to achieve these is to reduce both prices and construction times for those units.
Anything would help

And -if I'm right- it will be a good indicator of how static and boring this game has become... we really need options to tech rush / base walk meta and ways to incentivize T2 and mobile game.

Minermites absolutely need a repair rate nerf, this is a major balance issue that somehow hasn't been addressed yet

This way, they can retain the behavior while being easier to kill by focus firing (which means already an advantage for minermites by forcing suboptimal firepower usage)

I also think minermites should be destroyed by jets besides harriers... it would be fun and encourage more air play which is kinda niche ATM specially when it comes to epsilon planes, also kinghtframes are a powerful AA unit so it would be ok to have this dynamic.

not so sure about the last statement... buzzards can take down buildings quite easily and if they get your power then it will be gg

Now we need some buffs to SC

additional suggestion:
I think foehn needs the ability to build an empty refinery (without minermite) from armory tab, this construction option should be unlocked around mid game (either from loom/cyberkernel (?) or from full tier 3)

...And while epsilon and soviets rival each other for the fastest build (epsilon can unlock T3 faster than soviets by a good amount (7%) -even supers and late game marginally faster) but on the long run nuclear reactor becomes better by supplying enough power to defences without adding construction time)

...Foehn is consistently slower than allies, so I'm not asking to change that but to improve mid game foehn building times and add some relief to a clunky miner behavior