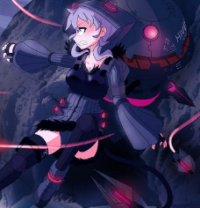 Divine,I racked my brains for a suitable alternative for the Gehenna Platform-and this is what came up.

Drone-Let's call it the Dybbuk Harasser.It would have a small plasma bomb within and on detecting an enemy aircraft,it would fly towards it relentlessly and ram into it with great speed,dealing heavy damage.Speed-let it be 36.HP-could be 200.Armor-Light Aircraft.

Here's the description:-
PsiCorps Nephilim Hive
The fearsome Gehenna Platforms of PsiCorps were once more than enough to strike fear in the hearts of their enemies' pilots.But as the war with the Foehn Revolt wore on,the Wings of Coronia made several improvements to their aerial armada that not only made it difficult for the Gehennas to deny the skies,but also put them in the path of death.A new response to the Coronian fleets was needed-one which came,most ironically from the Cloud Piercers of the Haihead.

Having secured the schematics of the Diverbee drones,Epsilon engineers came up with a well-appropriated idea - the development of a suicide drone of their own,the Dybbuk Harasser.These small wonders of destruction were then packed into two compartments in the back of a modified Gehenna chassis,resulting in the birth of a cutting-edge anti-air vehicle-the Nephilim Hive.

Though PsiCorps personnel were initially sceptical about it,on seeing it perform in the field,they were elated.Carrying several Harasser drones in it's hull,it is a veritable threat to any aircraft in the sky.Released two at a time,the drones pursue their targets doggedly and blast them to pieces on contact.On deployment,additional sensors are activated to support the powerful tracking systems of these vehicles,which help the drones to travel further and hit the weak spots in an aircraft hull,dealing more damage.A powerful engine allows for tolerable speed.Despite these advantages,the Nephilim Hive is prone to ground forces and thus should be escorted to it's locations.

Tbh,the Nephilim Hive partly resembles the Drone Carrier Hoverdyne of the Order of the New Dawn in Ground Control.

Considering that the description makes it sound like a stolen tech unit....Well,there is a possibility to think about.

Let's be blunt: Nobody will make Dracos to do that. Draco is one of least used MBT's from all the games i have noticed, despite their actually amazing gimmick. You are better off with using Tarchias (not a joke). Another thing being, if you plan to just headbutt your enemy with Pteranodons, you may aswell put your white flag in - PsiCorps has 2 funky units that can handle them. Archers (which receive anti-air range bonus) and Libra herself, who can easily flyswat air units.


Well,I've this to say-I used the Draco baiting trick with great success against a fellow(not my pal I mentioned earlier)who played PsiCorps.He fell for it hook,line and sinker.From then on I took care not to play too many Coronia v PsiCorps matches,lest this little idea be appropriated.

Do you really think I am that stupid that I'll simply spam Pteras?!Get real-Archers can be vaporised by Zorbs.And as for Libra,well,countering her is a notorious challenge.

That being said,my opinion of the Epsilon factions is like this-
HQ>SC>PsiCorps.

As a Foehn buff, I usually switch between Wings of Coronia and Last Bastion, but sometimes I found China is really fun to use.

I like all three Foehn factions,but I prefer playing Haihead.Don't get me wrong-I don't main Last Bastion as my blue text would have you think.

I was wondering if there might be any missions or plot changes that will touch upon Canada's role? The only time it's ever featured is in "Recharger", and that's just a single, barely inhabited island. Nothing about whether it's effected by the war or tries to aid the US or is eventually conquered by the USSR. It's even worse than Australia in this regard, who atleast get some attention with the Hailstorm. Perhaps they should get more attention in Covert Ops/Co-Op missions, because it's pretty glaring to exclude them completely from the plot.

I also think the whole thing with the Psychic Beacon in China should be more properly explained, and I think others have expressed how confusing it is- how China got ahold of it, the purpose of Yuri sabotaging it, why the destruction of it strains relations so much with the Chinese when it was being used by the rebels against them. The alliance between China and the Pacific Front is also really poorly explained and nonsensical. China invades Japan, and somewhere along the line Japan capitulates because of a Non-Aggression Pact from years ago nobody else knew about? And Norio sides with the Soviets because of the threat the activities of China poses to civilians in the area, as if they care at all about them? Perhaps this is explained further later on (I just started Moonlight), but even early on, this should all get more explanation.

Did Australia also side with Japan and South Korea in siding with the Chinese?

The way the EU and Pacific Front basically snub the US and only act to salvage their military technology as they fall apart also gets no real explanation.

These are considerable plot-holes.I recommend that you start a separate thread dedicated to addressing this sort of stuff.

In spite of the unofficial wiki being called a "community-based" one, there are hardly any MO players that are consistently active on the website in question. If the official wiki is to come around anytime soon, there better be a solution to what the unofficial one doesn't really have at the current moment: a team of willing contributors.

It is true that very folks are contributing to the fan-made wiki on a regular basis.I just hope that changes urgently.

Speaking of which,I am thinking of helping out with the wiki.

Seriously tho, bunkers are primitive (even if useful). Foehn is all about high-tech stuff.

Foehn is also all about medievalesque stuff, ironically. Just look at their knights and lancers. This is why the castle theme would suit them.
Although, on second thought, they might be a bit too spamable which is why they should only one hold 1 infantry per battlement as compensation.
For those of you thinking this is "broken" or "OP", it's really no different than a pillbox or gun turret, I assure you

Excuse me???Foehn is predominantly all about high-tech stuff.And if you are talking about medieval stuff,should I remind you of the Empire of the Rising Sun?

Here's my story that I wrote for a fiction writing class at my university. It tells the story of U.S. Army Captain Daniel Downs as a joint U.S. and Soviet taskforce attempt to destroy the Mental Omega device in the Antarctic.