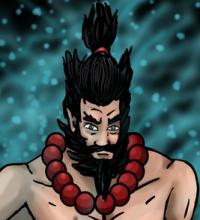 Progress reports...
The computer gods have capitulated and have allowed me to continue work.
I had to make multiple sacrifices to the computer gods and do things that would be wrong to admit liking but
it will all be worth it when the mod is finished.

Not just a cruel joke...I'm pretty sure it gave people cancer as well.

Zeta why are you still using a 14 year old OS?

Congrats on the release guys.

Battle of the 9 Armies

Wait that's not right...
Well you get the idea.
The 9th faction will be Erebor, faction of the shaving adversed.

Erebor are a powerhouse infantry faction fielding a large number of strong infantry units for both attack and defence.
Familiar faces will make up the hero list like Gimli, Gloin, Dwalin and King Dain Ironfoot.
Via the spell store other dwarf heroes will also be making an appearance such as Thorin Oakenshield and his ill fated companions.

Breaking with tradition Erebor won't be coming alone they'll be released at the same time as the Strongholds. I've always thought of Matt Belamy's singing style more like Thom from Radiohead with a little Freddy Mercury thrown in.

Brandon Flowers is super Mormon too which is always funny.

Be your own pet which I've probably already posted.

New screens for the upcoming Beta 0.18

There's a lot more of this performance to be found and it's totally rad.

That's totally not me.

Has he got the right Lua settings?

The screech works from a lua script that broadcasts the terror emotion.

Well fuck me that was quite a harsh word.

My favourite, because  Ursula is great.

Beta 0.2 will have some new maps included one of them is Lower Methedras.
A 2 player Castle map set in Dunland.
The map has 2 Expansions, 8 Econ plots and is inhabited by Orcs and Wild men.

Methedras is the southern most peak of the Misty Mountains that towers over the Wizard's vale of Nan Curunir.
Lower Methedras is set specifically on the western slopes of the mountain on the Dunland side.
It is the latest in the Dunland map set which also includes North Dunland and Vale of Wulf.
This map has has steep cliffs and grand views a various mountain passes to explore and set up ambushes.
Lining the slopes is a pine forest that offers cover, effective use of the passages, cover and choke points can make all the difference in a battle in Lower Methedras.

Will people stop calling mods expansion packs because they are not.

Beta 0.155 hasn't gone entirely to plan to say the least but it looks like I've fixed all the big problems and I'm almost ready to release Beta 0.16 which will be up later today.

The problems with the launcher have now been fixed and the patch checker should work as intended.
The bases issue has also been fixed.
But that's not all I've decided to add in a couple of the Dunland 2.0 changes into 0.16 like the new unit Adorn Champions.

The Adorn Champions are a strong melee horde that wield large blades in battle.
Available from the level 3 Dunland Steading.
War Hounds have been from the Hut to Farms and are now available after the War Craft spell has been purchased.

A new Faction Upgrade is being added to Dunland called Fire Brands which upgrades the Hobelars to attack structures with Fire Brands dealing strong damage to structures.

Visual improvements have been made to some of Dunland's structures like the Farm and Camp Walls.
Dunland will also now have access to Postern Gates in their castles.
Various other balance changes have also been made.

But you'll have to wait till Beta 0.2 for the rest of Dunland 2.0's changes
Like a second new Faction Upgrade, a new hero and another new unit.

With Rivendell the 7th faction almost upon us I've already got plans for the 8th faction.
It will be released by April 14th.
There are a couple factions that are all at about the same point in development but it's most likely going to be Harad.

For those who have been following Lone Wolf for a while will know that April 14 is the anniversary of Lone Wolf so my plan is to have half of the factions released by then.

I little while ago I teased a secret plan for Return of Shadow's future well time to reveal.

The Lindon faction for Age of Numenor is also a Return of Shadow faction.
(Bum bum Baaaaaaam!)

The Lindon faction was originally intended for the Lone Wolf and I've always planned to release Lindon as the 17th Faction.

The faction will be almost the same for both mods.
Some work on this faction has been done already but it's still a while off it's planned for after the 1.0 release.

Also I'm looking to release a first beta of Age of Numenor this year sometime probably after July like Return of Shadow I'll be releasing factions periodically.
The basic factions Gondor, Mordor and Northmen will be in it as well as possibly Arnor and who knows maybe Lindon.

A little bit of Rivendell

2 Preview screens of Rivendell.
First is Elrond fighting on horseback which gets unlocked with the Peredhel Armour faction upgrade.
As you can see Dunland's let the dogs out (turns out it was them this whole time).
The AI loves using the dogs now and they can be quite dangerous for the unwary.

Second screenshot is of the Noldor Chargers (renamed from the Imladris Chargers) riding head first into the jaws of the War Hounds.