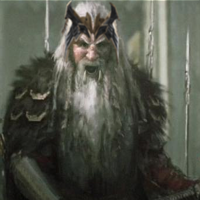 A true and proud Dwarf of the Lonely MOuhntain! Excellent job.

You meant with Bigger and Smaller Mask!? I personally prefer more the Normal Mask!

But when I saw this I thought about "Protect your bears!"

Nice work on the Model,great Details,they look will awesome in Game.

The thing is that inded Erebor Soldiers are less shown but since it was only Prologue so sadly they had small time. :(

About the Dwarven Cavalr I agree that it should be limited but not to 1 at least 3 or even 4 Battalions will be enough of Medium Ram Cavalry after al lthey were around 500-600 Riders in the Movie.

The Ballista should be made as War Machine but not only Campaign,the Catapults will be agaisnt Buildings while the Ballista Moderate DMG to Infantry but qquite slow begin made of Solid Metal and really weak against Cavalry Units and may be even LImited to let's say 5 Ballistas!

I think all this will Balance them.

I agree that Erebor during War of the Ring was ruled by Dain and many IHs Dwarves moved there,but still a good Number of them stayed in IHs and it became like a Colony or Fiefdom to Erebor and there is even specualtion that Thorin III Ruled it as Lord there from his Father Name. So this suggests that IHs Maintained a Small Garrison or Military COntingent for Defense... All this suggests that tere can be Spell that Unlocks IHs Reinforcments-Swordsman,Spearman,Crossbowman,Chariots,Ballista but all this limited to like 4 Battalions or 3 of Soldiers and etc for the others...but the Main Army should be Erebor's,and to make Erebor look different than Erebor Under Thror around 171 years ago and yet to not look like IHs and be uniqe,I suggest some kind of Variation or Change of the AUJ Erebor Armor,like slightly Different Color Sheme or something like that,to show that Dwarves Remembers their Roots and respect the previous days and we know Dwarves care for heritage and all,I belive this will be really great and we can have Erebor - Guardian with Shield and Axe,Spearman with Shield,and Archers or Axe Throwers to keep one really unique EA Unit which I quite like,but Erebor Units can have diffferent Bonuses to the IHs Reinfrocments...and the Elite Unit can be something like "The Iron Guard" or "Iron Legion" which cane be Dain's Guard.Soldiers with Variation of IHs Armor with more Gold/Yellow Color and wiedling Two Handed IHs Mattock and toggle with Shield and Sword,while the other Elite Unit can be the Grim Hammers...

I hope this can be of some use.