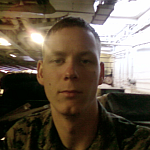 Hmm a little about me...

Well, I'm currently a member of the U.S. Marine Corps as a Data Systems Specialist, with one year left on my contract before I return to civilian life. I've been deployed to the Mediterranean and Kuwait, and i am stationed in Okinawa in a non-deployable unit.

I began modding in September 2003 with YR. I started YNT:A the following months. I started AW2:YRR and the Custom Voxel Project in 2005 I believe. In 2006 I began working with Eva-251 on his project The Cold War, which since late 2007 has been given solely to me. Before The Cold War was popular in its infancy I worked a little bit for a project with KaRsKiN called 'Nam '65, a total conversion set for the Vietnam Conflict. Despite its status as merely a footnote in modding history I dedicate the Cold War's '60s era mode in its memory.

I have several projects on the side, such as Galaga: Gamma Invasion (2006), Forsaken Blades(2009), and Battlezone (here is a gameplay demo of Battlezone in action). Although none of my main projects have been completed, YNT:A and Battlezone are in public beta stages. The Cold War is in private Alpha stages, and the rest are still in development. I am the leader and sole member of all my projects, and have only one semi-active beta tester for them at the moment, and he is not a member of any of the modding forums. He is a former co-worker of mine who is also military.

My main inspiration for modding has been seeing other mods in action, notably Eagle Red, Secrets Revealed, and Mooman's Rules. I really like voxelling aircraft but am capable of doing competent tanks and certain building SHPs as well. I love drawing machinery and I often incorporate such artwork in designing units. My drawn artwork is hosted at this Photobucket album, from which you can browse through not only my artwork, but also the latest voxels I've made since late 2006.

I may not post much at the forums, but I browse often.