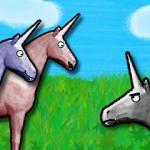 In Topic: Faster than light

Neither being an expert on physics, nor being interested enough to google it, I do wonder why they thought the speed of a photon was the maximum speed - as if the 'speed of light' was a universal absolute. It's not the only elementary particle! But then, I guess it's dual-particle/wave behaviour might explain that.
Oh wait, mass zero. Okay, I get it.

Weren't there particles with negative mass? Some type of anti-matter, I believe.

In Topic: The accelerating disintegration of the EUSSR

Hm, can you read Dutch, Námo?

Apathy, another of those trademark things of modern times.

Still, this won't just be the end of it. Sooner or later the fire's gonna start again.

In Topic: The accelerating disintegration of the EUSSR

Shit just got real - Sarkozy and Merkel have plans for a EU government which has control over ALL of the members' budgets, making them in control over the entire European economies. Committee will contain, of course, only France and Germany, and be led by (who else) Van Rompuy.

You'd almost think it was always the plan for it to become like this. Intertwine the European economies with a single currency, add some countries to the mix (Piigs) which, if you think critically, can no way hold their end of the bargain, wait for the inevitable crisis to come of that and the system to collapse, and use the chaos as an excuse to draw more power to themselves.

Well, at least Germany finally has control over Europe after two failed World Wars. Hitler would have been proud.

In Topic: US Debt Battle

Recent news: the Dutch parliament is planning on supporting the idea of increasing the power of the ECB. The EU, despite being the cause of this crisis, will be given more power instead of less.

Seems like it's now up to the Germans to counter the further installment of the EUSSR.