The subject of the Haradrim fortress, and their structures is one of a fair amount of discussion and debate. These southern peoples will be represented as a full faction in The Special Extended Edition. I have worked long and hard to design an architectural style and building set that will suit the design of the movies and is acceptable to Nazgûl’s plans for the faction. It also must not be racist.

I tried again to create a fortress for the Haradrim, quietly and by myself for the most part. Nazgûl has been inactive and I have been acting on my own and on a separate faction, since The Misty Mountains and Erebor factions are his current domain. I was also requested by NJM, ages ago, for a building set for Umbar, which is still being worked on. Sure I retextured some Gondor and Grey Havens buildings, but it did not seem right, Umbar needed its own building style.

I have designed an architecture set that represents the city port of Umbar at the height of its power, under a Black Numenorean diarchy. It is the southernmost of the three realms of Numenor in exile. Further design work will be needed to create a look that is fitting for the waning of Umbar, ruled now by the Corsairs and the Haradrim, and in a state of ruin and patchwork. Once a suitable design from the prime state of the architecture has been reached it will be possible to start ‘ruining’ them, and to incorporate elements from the vanilla structures of the Haradrim and Corsairs.

What I have created is a building set, I modelled a selection of building parts and then reused and modified them to build up the various structures I wanted to make, similar to building with large LEGO bricks. It is not perfect yet, and there is still a long ways to go. 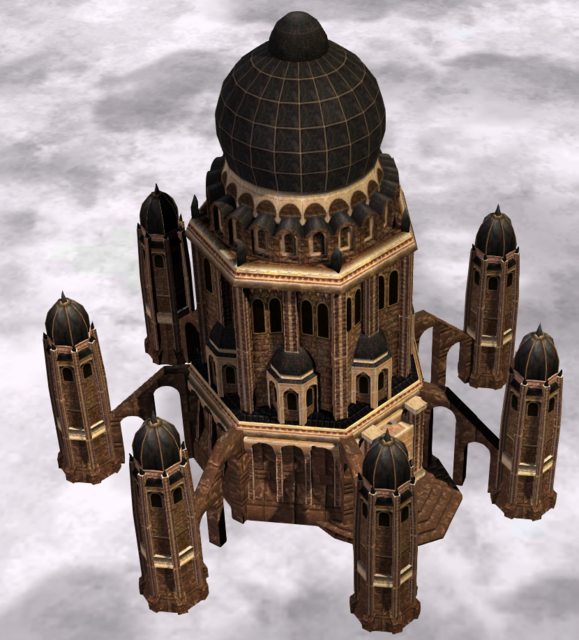 Here we have the great Umbar Citadel, used exclusively as the main hub of the Umbar fortress map (map started by the legendary NJM). This mega structure serves as the style guide for other buildings in the set. 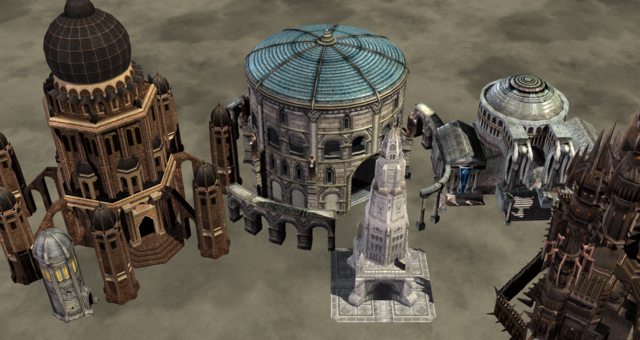 This is the Umbar Citadel compared to other fortress map keeps/citadels. 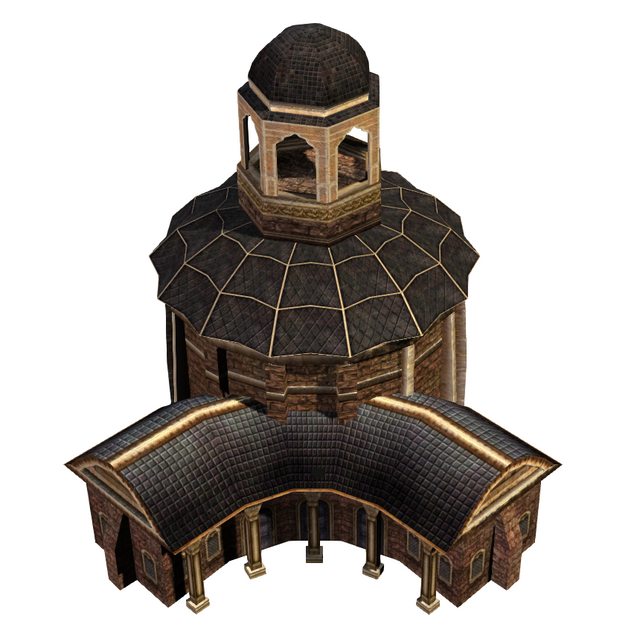 Here we have the Umbar Royal Stables, or otherwise known as the Umbar Royal Caravanserai. It was intentionally designed as a caravanserai, with inspiration from an unused BfME 2 Outpost concept. Whether or not this building will be an Umbar skirmish map civilian building or part of the faction remains to be seen. 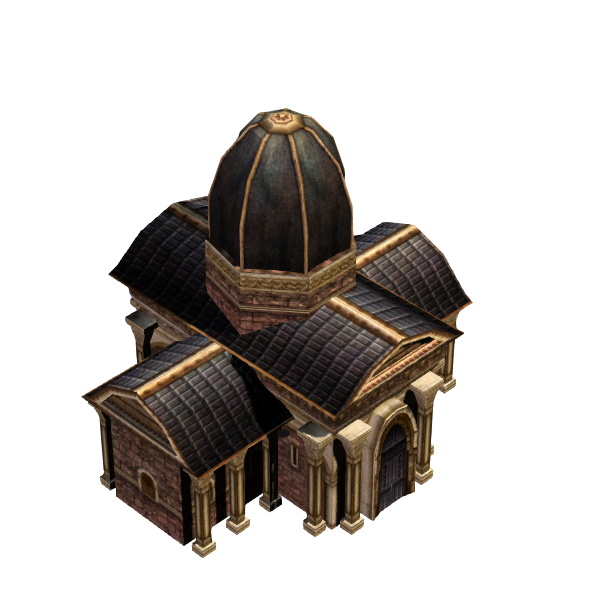 Here we find the Umbar Palace, intentionally designed similar in form to the Haradrim palace. 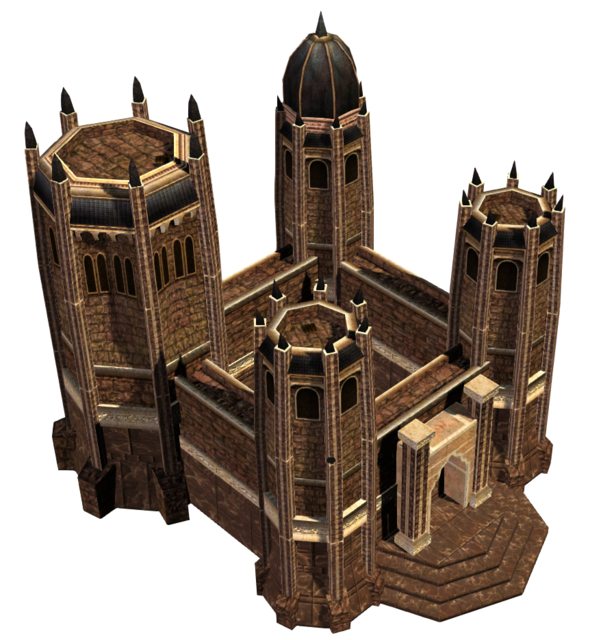 Next is the Umbar Fortress, otherwise used as the Haradrim Fortress. 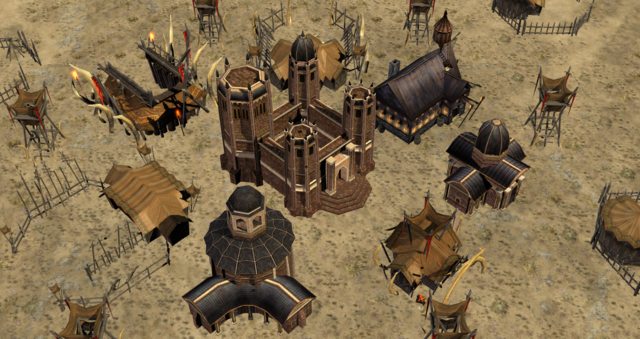 The fortress and other buildings do not fit in with the vanilla Haradrim structures yet, I need to get their prime designs finished and then I'll work on ruining them and adding tent elements to them so they blend in. I recognise that colours need to change too.

As per Nazgûl’s ideas, this here is the start of retexturing the Angmar fortress. I am not an expert at replacing textures, and this is only a work in progress. The spike parts are a real pain.

Of the structures that I have created, whatever is discarded can be used in other places. For example, the Umbar Palace can become a special secret civilian building in the Umbar map (that the player is unable to use).

I can create build up animations for all these new structures, I can create damage states for all of these structures too. It will be simple enough to create snow textures, upgrade textures and damage textures as well. Damage animations will be more difficult as there will be chunks flying off and crumbling.

Potential fortress upgrades, taken from my original topic (Which I will ask to be deleted, it is confusing and the model I created looks terrible. =p )

o   A great sandstorm of the south covers the fortress

o   The surrounding earth is burnt by the hot southern sun

o   Structres are given a bonus

o   The fortress is built anew by the Black Numenoreans

o   Strengthens the walls of the fortress

To add to what I have posted:

What needs to change, what don't you like about it?

I would work on some building BIBs, it adds more ground to the structures. The actual style of the buildings matches perfect with the Black Numenorian lore. I love them.

First off... thank you for the compliment. Never before have I been referred to as "legendary".

The buildings look awesome. I especially love the great citadel. The stables look cool except the way the roof line butts-into the tower that intersects the center. Something about it looks off.

I think you have nailed the umbar buildings. What will be interesting is seeing how you take ruined umbar buildings and add haradrim elements to them. I almost would like to see 3 tiers of buildings. Something that combine nomadic elements with the more permanent structures of the men of numenor

Back to Harad faction