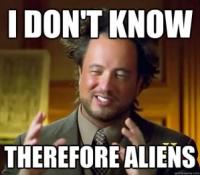 Twinkies are back. Life just got a lot better.

In Topic: Vent your anger topic

Firstly, how did school end 3 years ago? You just posted that.

Secondly, I did poorly in middle school, but shaped up in high school. Quite frankly, your grades don't matter until high school, and even if you screw up there, you can always apply anywhere as a transfer student after a year.

In Topic: Vent your anger topic

Im angry, because on the last god damn week of school my science teacher gave us a keynote project to do that was worth 100 points that was due in 5 DAYS. I had to only finish the last slide and make up a title over the weekend, so I brought it home on a flash drive. but I have a windows 7 computer, not mac (I hate mac computers). AND THERE IS NO WINDOWS VERSION OF KEYNOTE. So, he gave me a late grade (50% off) on Monday which dropped my FINAL END OF THE SCHOOL YEAR GRADE from an A+ to a C.

I am SO glad I won't have him next year.

Did you try to problem solve and talk to the professor when he gave the project? Unless his course specifically recommended that you needed a Mac at the beginning and that a PC would be no good, any half-brained administrator will consider it unreasonable to go out and buy a new $1.5k computer for one project. I'm going to proceed under the assumption that you made an effort to be proactive in your situation. If he talked to you and said 'idgaf, good luck,' go talk to your department heads or a dean or something - try and get that grade changed. Bring up everything wrong he's ever done to you and some proof. If you get the right person, they may take you seriously. They might not, but it's worth the shot.

Either way, I'd flip out if that happened. School was awful, but bad grades would have made it worse - especially if the drop was so sudden and so unwarranted.

TBG who were you actually here longer than?

Most of the people on that list have been here even longer than me.

Ridder Geel has been here about a year less than TBG, and only 16 days longer than me.