It's been a couple of months since the last patch for YR Red-Resurrection and in that time some significant changes have been made. Since the release of 2.2 I have been reworking countries that I felt were lacking, and the last of those was the United Kingdom, who have finally been given the attention they need in this release.

Calling in reinforcements from around the empire, the British Army is bolstered with special units capable of turning the tides of battle. Furthermore they gain the Pintail and Pop Shell, which replaces the Arms Jammer, and the Battle Fortress has been reworked.

Not only have the UK received additions however, Yugoslavia gains the Ironsmith, an infantry equipped to render your tank divisions unstoppable! As always, new maps have been added as well. 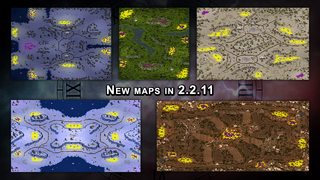 
Of course there are many balance changes, bug fixes, additional maps and more! Here's an overview of the entire patch:

Big Features
Reworked the United Kingdom, altering existing units and removing and replacing others, including-


Remember you can always join our Discord for active discussion and first-look at every upcoming patch!